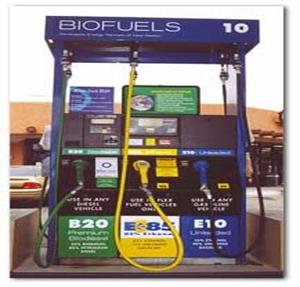 Here's something you don't see every day on the front page of a major American newspaper: an article about how the rising demand for ethanol has sent corn and grain prices so high that it's resulted in more people around the world going hungry.

Even more shocking: the article in question was on the front page of Saturday's New York Times.

Soaring food prices, driven in part by demand for ethanol made from corn, have helped slash the amount of food aid the government buys to its lowest level in a decade, possibly resulting in more hungry people around the world this year.

The United States, the world's dominant donor, has purchased less than half the amount of food aid this year that it did in 2000, according to new data from the Department of Agriculture.

Corn prices have fallen in recent months, but are still far higher than they were a year ago. Demand for ethanol has also indirectly driven the rising price of soybeans, as land that had been planted with soybeans shifted to corn. And wheat prices have skyrocketed, in large part because drought hurt production in Australia, a major producer, economists say.

The higher food prices have not only reduced the amount of American food aid for the hungry, but are also making it harder for the poorest people to buy food for themselves, economists and advocates for the hungry say.

The impact of rising food prices on food aid is part of a broader debate about the long-term impact on the world's poorest people of using food crops to make ethanol and other biofuels, a strategy that rich countries like the United States hope will eventually reduce dependence on Middle Eastern oil.

With ethanol being less efficient, harsher to the ozone, and a bigger greenhouse gas emitter than fossil fuels, when you factor in its inflationary impact on food and the associated destruction of rainforests across the globe, there is no question that this biofuel experiment has been a dismal failure.

Yet, with very few exceptions, global warming obsessed media have been reluctant to expose the flaws in this over-hyped panacea.

Does this Times piece represent a sea change? Or, is one front-page article on a Saturday nothing to get too excited about?

Regardless of the future media impact, Congress is indeed scheduled to debate a new farm bill before the end of the year. With the current high price of gasoline, irrespective of all the other components of this issue, it seemed likely that few legislators would want to bring up anything that could appear to go against the conventional wisdom surrounding ethanol.

Since few press outlets have reported the negative aspects of biofuels, most Americans probably think gas prices would be higher if not for the current federal requirements for ethanol blends.

Yet, if the Times is willing to expose this issue, and members of Congress are aware of it, maybe this subject will appear less of a third rail in the upcoming months.