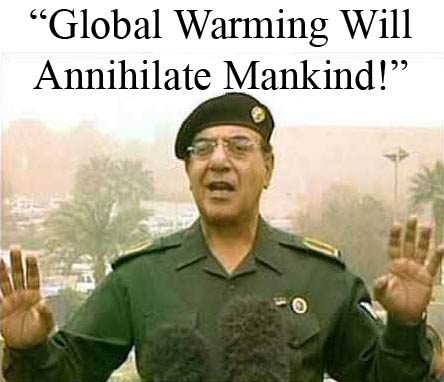 Fans of the highly-respected British publications The Economist and the Financial Times are certainly familiar with Clive Crook, one of the leading economics journalists on the international landscape.

On Thursday, Crook wrote an article entitled "The Steamrollers of Climate Science," in which he took on the United Nations' Intergovernmental Panel on Climate Change as being "a seriously flawed enterprise and unworthy of the slavish respect accorded to it by most governments and the media."

In fact, Crook painted a picture of this U.N. outfit possessing the factual integrity of Baghdad Bob (emphasis added throughout):

In the decisions which have already been made on climate-change mitigation, to say nothing of future decisions, the stakes are enormous. In guiding these momentous judgments, the flawed IPCC process has been granted, in effect, a monopoly of official wisdom. That needs to change and the IPCC itself must be reformed.

For a fully documented indictment, read the article by David Henderson in the current issue of World Economics. Mr Henderson, a distinguished academic economist and former head of economics at the Organisation for Economic Co-operation and Development, has been tangling with the IPCC for some time. Five years ago, he and Ian Castles (a former chief of the Australian Bureau of Statistics) first drew attention to a straightforward error in the way emissions scenarios were being calculated. The projections had used long-range cross-country projections of gross domestic product that were based on exchange rates unadjusted for purchasing power. This mistake yielded projections for individual countries that were in some cases patently absurd. Far from acknowledging the point and correcting the projections, the IPCC treated these eminent former civil servants as uncredentialed troublemakers. Its head, Rajendra Pachauri, issued a prickly statement complaining about the spread of disinformation.

As NewsBusters readers are keenly aware, such behavior at the IPCC has been quite commonplace, though always ignored by a global warming obsessed media:

The problem is, although the contributors and peers are impressively numerous, they are drawn from a narrow professional circle. Expertise in economics and statistics is not to the fore; sympathetic clusters of co-authorship and pre-commitment to the urgency of the climate cause, on the other hand, are.

Add to this a sustained reluctance - and sometimes a refusal - to disclose data and methods that would allow results to be replicated. (Disclosure of that sort is common practice these days in leading scholarly journals). As a result, arresting but subsequently discredited findings - such as the notorious "hockey stick" chart showing the 1990s as the northern hemisphere's hottest decade of the millennium - are left to be challenged by troublesome outsiders.

As has been discussed by many present and former IPCC contributors, this is not what science is about. Not even close.

Yet, there's a reason for this ridiculous behavior:

From the outset the IPCC network was fully invested in the idea that climate change is the most pressing challenge confronting mankind and that urgent action far beyond what is already in prospect will be needed to confront it. In the minds of the panel's leaders and spokesmen, this conviction justifies public pronouncements that often go beyond the analysis which the IPCC's own scientists have presented.

Speaking of the panel's Fourth Assessment Report, Mr Pachauri said: "I hope this will shock people and governments into taking more serious action." The rules under which the IPCC operates tell it to be "neutral with respect to policy" - and the reports themselves strive to comply. But statements such as that, and many more besides, align the institution and its network of scientists with a programme that goes much further than science alone dictates.

Sadly, America's media, and global warming alarmists like Al Gore, refuse to acknowledge what so many scientists and economists all over the world so easily perceive.

Unfortunately, there's a lot riding on this given the number of countries considering economically damaging climate change legislation:

[I]f governments are to get the best advice, they need information and analysis from an open and disinterested source - or else from multiple dissenting sources. With the environmental risks calmly laid out, framing the right policies demands proper political accountability and a much wider range of opinion and expertise than the IPCC currently provides. One incompetent institution, committed to its own agenda, should never have been granted this degree of actual and moral authority over the science, over public presentation of the science and over calls for "more serious action" that go well beyond the science.