Whoopi/Sunny: Christians Must Bake the Cake, Only We Get to Deny Service 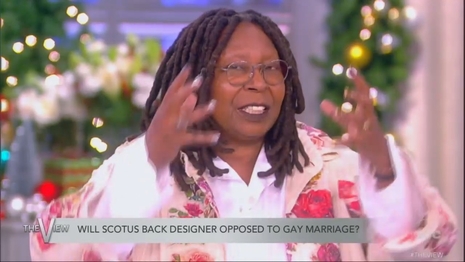 Ignorance, hypocrisy, and anti-Christian bigotry were once again on full and proud display during ABC’s The View on Tuesday, as Whoopi Goldberg and racist Sunny Hostin demanded Christians be forced by the state to bake cakes and design webpages for gay weddings, despite it going against their religious beliefs. But they also proclaimed they had the right to deny service in their hypothetical bakery if someone wanted a design that they personally found distasteful.

Goldberg began the show by lashing out at Lorie Smith, the plaintiff in the religious liberty/freedom of speech case the Supreme Court heard on Monday. Goldberg scoffed at the idea Smith’s religious convictions were protected, suggesting the web designer was somehow “pooping on my religious freedom.” She also parroted the ignorant argument that Constitution guaranteed her “freedom from religious beliefs.”

In an unhinged rant, Goldberg tried to equate the case with a hypothetical scenario where she would be denied medical care because of her politics. She also doubled down on her BIG LIE that Christians wanted doctors to let gays die from a lack of medical care, this time expanding it to black and women too:

“So, whose rights are we protecting? And what's going on with the Supreme Court that they don’t recognize what this is,” she shouted.

Later in the show, Goldberg screamed this was all a ploy to expand discrimination and racism. And she baselessly accused doctors in Catholic hospitals of refusing to treat Jews:

That's what's coming! That's what this is about! You want the right at some point to say to me: “I don't like your lifestyle, I don’t like your color, I don’t like your husband, your wife, they’re black, brown, Asain. I don't like any of it. And I’m not going to serve you.” Two points, if you don't want to be in service get out of service! Do something else! If you are a doctor also and you work in a Catholic hospital and a Jewish person gets hurt you can't tell me you're going to discriminate against them! You can't tell me you're going to do it because it's against the law!

Goldberg has never addressed where she’s hearing these claims and ABC’s Standards and Practices division hasn’t told her to stop.

Hostin, who claims to be a devout Catholic, opined about the Supreme Court is not trusted and that “religion has been used to disguise various sorts of discrimination in the past and that’s why we have the laws in the first place.” “They hide discrimination, as they’ve had for a long time, under, you know, within the bible, under the bible, within this rubric of – of – faith,” she chided.

Using disturbing terminology, Sara Haines decried “the religion problem” and denounced all religions because a few people around the world use theirs to justify heinous things. “[A]cross this globe people are allowed to kill people, they're allowed to marry underage people, genital mutilation, child abuse, forced labor. You name it in the untouchable religion,” she said. 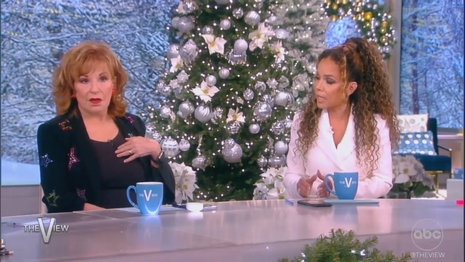 If you thought Alyssa Farah Griffin would be the one to bring sense to the discussion since she calls herself a conservative, you’d be wrong. While she said she was “against coerced speech,” she didn’t trust the conservative justices not to create a “slippery slope” and allow for “racial discrimination.”

Farah Griffin also attacked Smith: “It's a tough one for me because I do think it’s a bigoted position to say you’re not going to build a website for a gay couple.”

BEHAR: So, what if I'm a baker and someone says to me I want you to make this cake and I want to have a swastika on it, or I want you it to be some kind of racist trope that they want on it, or I'm having -- I have a gay friend and I want you to on write something homophobic on it even as a joke? Am I compelled to then bake that cake?

HOSTIN: Well, it depends – well – You know (…) If I were to answer the question based on what I learned in law school, is, no, you cannot do that because it's discrimination. There are protected class.

HOSTIN: Yes, because are protected classes.

Behar was visibly shocked by the answer (pictured above).

Goldberg got in on that analogy too, whining that people talk about “freedoms, except when it comes to stuff they don't like.” She then hypocritically argued that she would have the right to deny the swastika cake. Hostin flipped, saying she would be in the right to deny them service because what they wanted was discriminatory (click “expand”):

GOLDBERG: if somebody comes into my bakery and wants me to make a swastika on a cake, I'm going to say, actually I'm not going to do that because to me that's is just anti-human being, I don't believe in the Nazi Party and you can go over there where they'll make it for you, but I’m not going to do that here.

HOSTIN: And it’s anti-Semitic. And so, I would argue that it's protected as well.

GOLDBERG: Yes, it should be protected. But you know --

Haines also spoke up in defense of religious freedom, noting that both the baker and the web designer “serve clients who are homosexual” but “their issue is with [the] marriage” relation to the product they’re being asked to work on. She also confronted Hostin by calling out how she’s “conflating” things. “It's not like a town hall is saying we’re not going to wed you. This is a private business,” she argued.

The View’s anti-Christian bigotry and hypocrisy was made possible because of lucrative sponsorships from Procter & Gamble and Macy’s. Their contact information is linked.

You can read the transcript of the segment here.