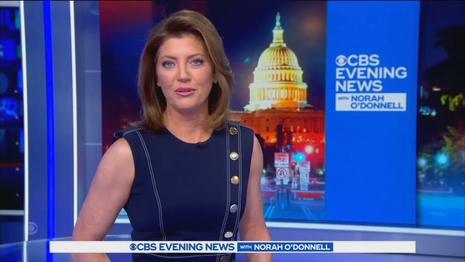 For awhile now, there’s been rumors that CBS News would show CBS Evening News anchor Norah O’Donnell the door as her third-place newscast continues to skid. And with them penning a new contract a few months ago, those rumors seemed to be a bust. But according to a New York Post exclusive citing insiders, the network tried to force her to quit by cutting her salary by more than half, and she called their bluff and accepted it.

In the report, the paper noted that her salary was slashed from $8 million a year to $3.8 million and O’Donnell’s acceptance of the cut came as a complete surprise to executives who are looking for her replacement:

According to insiders, CBS News re-signed the 48-year-old anchor in April with a yearly salary of $3.8 million — down from the previous $8 million — following reports that the network had been casting around for a replacement as O’Donnell’s ratings continue to sag.

CBS execs gave O’Donnell a “low ball” offer during the hard-knuckle negotiations, which they “expected O’Donnell to reject,” according to a source briefed on the talks. When she accepted it, some executives appeared surprised, the source added.

This salary lowballing came amid rumors that O’Donnell was under fire internally for “toxic behavior.” This came from another Post exclusive where insiders vented to the paper about how she doesn’t do the hard work other anchors do, lacks confidence on screen, and acts like a diva.

This has reportedly led executives to approach talent outside the network like MSNBC’s lyin’ Brian Williams and NBC’s Craig Melvin to take over for O’Donnell. There’s also talk that they were looking at moving CBS Mornings co-host Tony Dokoupil to the evening news.

There was also a suggestion that O’Donnell’s agents were shopping her to then-incoming CNN boss Chris Licht. The request for negotiation was declined because Licht wasn’t at CNN at the time, but a source close to him “was adamant that the exec would not want to ‘reunite’ with the ‘difficult’ anchor.”

The Post also reported that O’Donnell supposedly went over the head of CBS co-president Neeraj Khemlani “to negotiate her contract with CBS CEO George Cheeks and Shari Redstone, the chairwoman of CBS parent Paramount Global[.]”

In a statement to The Post, a CBS spokesperson lashed out at the paper:

“Wrong again. Neeraj led the effort to retain and re-sign about a dozen of our biggest anchors and correspondents over the last year including Norah O’Donnell and Gayle King — and recruited a few new ones like Nate Burleson and Robert Costa,” the spokesperson said.

“While there are huge prime time openings elsewhere in the News industry, CBS News has the No. 1 news broadcasts and finished the season with multiple shows including morning and evenings in their most competitive position ever. Apparently, the more false stories the NY Post writes, the better things go for CBS News.”

It's unclear what the spokesperson was talking about since CBS ranks third among the broadcast networks and has little upward momentum. In fact, NewsBusters has caught lazy programming by O’Donnell where she recycled month-old segments without any substantive updates.

The paper went on to note that “the thinly veiled job search damaged O’Donnell’s reputation and infuriated her team” and a source lamented that Khemlani “has damaged Norah. The show is never going to improve from third. CBS is no longer what it used to be. It’s not even close.”