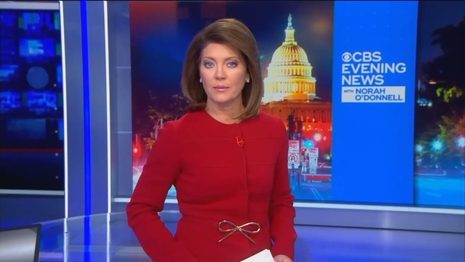 According to a report in the New York Post, CBS Evening News anchor Norah O'Donnell has a major attitude problem. Despite being in third place in the ratings and having to now deal with a new cost-cutting boss who is reportedly looking to put her on the chopping block, O'Donnell's attitude hasn't changed, according to the paper.

CBS News co-president Neeraj Khemlani has reportedly been looking to cut costs at the third place network and has been considering firing O'Donnell who makes between $6 million and $8 million a year. O'Donnell's contract expires this spring and Khemlani could let O'Donnell go as he's considering revamping the CBS Evening News.

While there has been speculation for a while that her days are numbered at CBS, the rumors have only increased after the Russian invasion of Ukraine when O'Donnell was the only anchor of the big three networks to not report from Ukraine.

“David Muir, Lester Holt and Anderson Cooper are all in Ukraine. Where’s Norah? We are in the middle of a war and she’s reporting from Washington, DC,” a source told the New York Post. “Either she didn’t want to go or leadership didn’t want her to go. It’s bad either way.”

O'Donnell's behavior on set has been described as diva-like and truly bizarre, The Post wrote. O'Donnell is said to require a full “dress rehearsal” of her nightly news show "half an hour before the show airs." Which, according to a source, is "an often tense ritual that has seen O’Donnell chewing out dressing room stylists over her hair and makeup."

“There was an incident last year in the studio where she ranted about how her bronzer was wrong," one insider said, noting that her hair and makeup staff take the brunt of her tantrums and have been known to end up in tears.

Another insider told the paper that full dress rehearsals are “very unusual” for news shows. Another insider added that the show's producers use the rehearsals to help O'Donnell appear "more human" and less "robotic" in front of the camera.

O'Donnell allegedly uses the practice sessions to figure out what segments to scrap, sometimes even with fifteen minutes to spare before the live broadcast.

“The rehearsals are an excuse to blow up packages 15 minutes before the show," one source griped. "She changes the words to segments. Everyone has a stroke.”

O’Donnell also has quite an expensive wardrobe budget as well, with one insider claiming the allowance is $65,000 a year. Although, O’Donnell’s publicist Cindi Berger denies this “It’s a clothing allowance, every news anchor has one. That figure is incorrect,” Berger said.

The New York Post also notes that O’Donnell has been causing problems at CBS for awhile and this revelation is just the latest escalation of the tense relationship between the host and the new executive:

Now, insiders say O’Donnell is facing heat from Khemlani, who was hired last year to revamp the organization. As previously reported by The Post, Khemlani’s gruff, exacting management style has ruffled feathers at CBS, leading to the departure of a slew of well-respected execs and journalists, including London Bureau Chief Andy Clarke, who left amid a spat over the cost of extracting Afghan journalists and fixers who worked for CBS.

O’Donnell and Khemlani began their tense relationship when it was reported that CBS was searching to replace O’Donnell. Which understandably upset O’Donnell and her team.