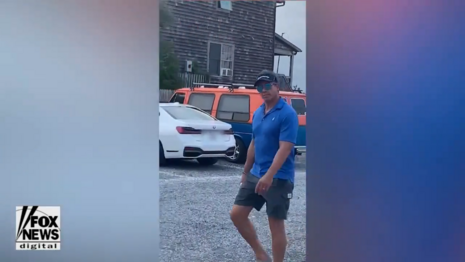 In a stunning video released by Fox News Tuesday night, after New York Governor Andrew Cuomo (D) resigned in disgrace, one of their reporters found CNN’s Chris Cuomo on vacation at a marina in East Hampton, New York. And according to Fox News, Cuomo seemed to threaten the reporter with arrest by state troopers, which his brother controls. Cuomo also refused to answer if he believed his brother’s accusers.

The video began with the unnamed reporter greeting Cuomo at the dock and asking him about his unethical counseling of his brother while also working for CNN. Cuomo refused to answer most of the reporter’s questions:

FOX REPORTER: Have you spoken to your brother today, sir?

CHRIS CUOMO: Of course, I have.

FOX REPORTER: Did you advise him to step down?

FOX REPORTER: Are you continuing to advise him?

FOX REPORTER: Do you think that’s an ethical conflict.

The question about whether or not he was still advising his brother was a reference to the Washington Post report from Monday, that found Chris was indeed still providing advice despite CNN’s objection and his on-air promise not to do so. And reporting from The New York Times on Tuesday suggested that it was Chris who advised his brother to resign.

“I think you got a job to do and I’m letting you do it,” Cuomo stated while walking past the reporter to his “black Ford F-150 SVT pickup with an American flag sticker on the tailgate.” The Fox report also noted: “The soon-to-be-former governor's younger brother has a slip and private parking spot for his double engine speedboat, ‘Heartstrong, at the marina.”

It was between camera shots that Fox News says Cuomo warned the reporter he could have him arrested. “Earlier, off camera, he implied he could have the Fox News reporter arrested by state troopers, stating he ‘called to tell them not to get you,’” the report claims.

And when asked if Andrew was going to join him at his home in East Hampton, Cuomo sarcastically told the reporter: “Yes, if you wait here, he’ll be here in five minutes.”

Eventually, the Fox reporter started questioning Cuomo on whether or not he believed his brother’s accusers. Again, Cuomo refused to answer:

FOX REPORTER: Do you believe the women, sir?

FOX REPORTER: Do you believe the women’s stories?

FOX REPORTER: Did you counsel your brother to malign them?

CUOMO: [DOESN’T ANSWER] [CONTINUES TO BACK UP]

Cuomo also refused to say if he thought there should be an internal investigation by CNN into his unethical conduct, as Washington Post media critic Erick Wemple called for on Monday.

“The younger Cuomo sibling is also caught up in the scandal after he was revealed to be part of a group of loyalists who advised the soon-to-be-former governor as accusations poured in, which people throughout the journalism industry have poo-pooed as wildly unethical,” Fox recalled.

They added: “But CNN’s Cuomo didn’t appear to be in crisis mode himself. Cuomo spent the afternoon on his lavish boat, in the extravagant waters of Sag Harbor, New York where the ultra-wealthy flee to escape the concrete jungle of Manhattan.”

Cuomo was on what the network described as “long-planned vacation” for his birthday, which was Monday, just three weeks after another summer vacation.