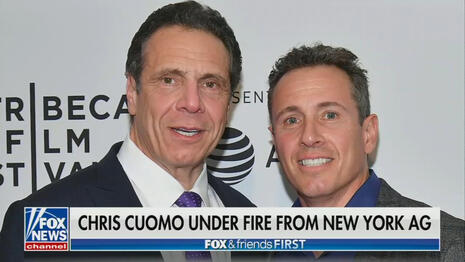 Buried in a Monday Washington Post report about the New York Assembly moving forward with Governor Andrew Cuomo’s impeachment, the paper let readers know that CNN host Chris Cuomo was still advising his embattled brother. This comes after CNN had called Chris’s conduct “inappropriate” and he promised on-air in May that he knew where the line was and that he wouldn’t embarrass his CNN colleagues that way again.

According to Post reporters Michael Scherer, Josh Dawsey, and Ted Gup, Chris Cuomo was continuing to be one of his brother’s go-to advisors as he fought for his political life:

Cuomo, who is ensconced in the governor’s mansion in Albany and has not been coming to the office, is left with few advisers. Rich Azzopardi, his longtime spokesman, has said he plans to stay in his post. The governor also continues to confer with longtime adviser Charlie King, a lobbyist at the public strategy firm Mercury, as well as his brother, CNN anchor Chris Cuomo, according to people familiar with the situation.

Back in May, when Chris proclaimed “I am family first, job second,” he suggested he knew “where the line is” in terms of breaching journalistic ethics. Adding: “I can respect it and still be there for my family, which I must.”

He also promised his viewers “It will not happen again.” “It was a mistake, because I put my colleagues here, who I believe are the best in the business, in a bad spot. I never intended for that, I would never intend for that, and I am sorry for that,” he lamented.

But clearly, he wasn’t, and clearly, it did.

On Sunday, CNN's so-called "Reliable Sources" host Brian Stelter claimed that Chris suffered a "real punishment" when the network called his actions "inappropriate." Clearly, it was real because he's doing it again.

Last week, The New York Times published a piece exposing how an unnamed CNN execute supposedly told Chris earlier in the year to take a leave of absence to join his brother’s defense and PR teams if he wanted.

“Earlier this year, CNN executives floated an idea to their star anchor Chris Cuomo. If he wanted to formally advise his brother, Gov. Andrew M. Cuomo of New York, on responding to the sexual harassment accusations that had engulfed his administration, he could take a temporary leave from CNN and return to the network later,” the report said.

On Friday, Chris announced he was going to take a “long-planned vacation” to celebrate his birthday just three weeks after his last summer vacation. “I’ll be fishing, I’ll be hanging out with you and I’ll be making memories with the kids,” he said on The Handoff, the podcast he co-hosts with CNN’s Don Lemon.

And as this author asked on Sunday, Chris’s birthday was Monday. But what else would he be doing the rest of the week?