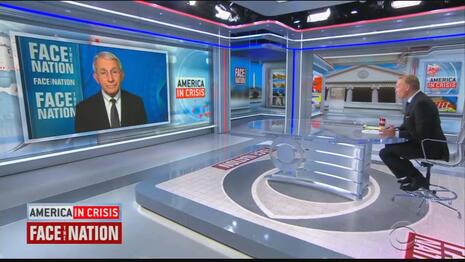 Over the weekend, the American public finally learned that the vaccinated were being forced to wear masks again because of a massive outlier in Massachusetts where vaccinated people at a beach gathering had a high viral load in their nasal pharynx. And when pressed on the data during an appearance on CBS’s Face the Nation on Sunday, Dr. Anthony Fauci claimed that viral load meant the vaccinated were spreading it at the same rate as the unvaccinated. But Fauci would be later proven wrong by a high-ranking Israeli public health official and a former FDA commissioner.

Looking for the details Fauci skirted around, Dickerson wondered if it was “true that the ability to spread is high, or is it a smaller subset of the breakthrough cases in which this discovery was made about the ability to spread?” Again, Fauci suggested that the viral load was “very similar to the unvaccinated individual. Which is troublesome. Which tells you the potential for transmission is there.”

But later, when Dickerson pressed Israel’s director of Public Health Services, Dr. Sharon Alroy-Preis on what they were seeing when it came to the vaccinated spreading COVID, she suggested they were seeing the exact opposite of what Fauci claimed.

According to her data, a vast majority of vaccinated people with confirmed cases were not spreading the virus, with roughly 10 percent spreading to only one other person (Click “expand”):

So, their ability to infect others is 50 percent lower than those who are not vaccinated. 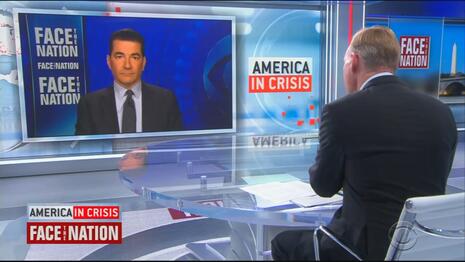 His confusion continued into his interview with former FDA commissioner and Pfizer board member, Dr. Scott Gottlieb. “So, it seems like breakthrough cases is a small set, and there is an even smaller set who might pass on infection to others. Is that the way you see it,” Dickerson asked.

“That's right. We know there are more people with this delta variant who’ve been vaccinated who are probably spreading the infection, but it is still a very small percentage of people who are becoming infected after vaccination, and who then are going on to spread the infection to others,” Gottlieb replied.

When asked to explain the “disconnect” between the Fauci and Alroy-Preis, Gottlieb suggested the CDC was drawing the wrong conclusion from the data. “The CDC is inferring from this study that there’s a risk of transmission in vaccinated individuals,” he said, comparing nasal pharynx to lower airway samples. “It is not a perfect correlate with your ability to transmit the virus or how contagious you are.”

Gottlieb also recalled that they have data that shows the vaccinated may only be contagious for roughly 24-48 hours, maybe as long as 72 hours.

DR. ANTHONY FAUCI: Well, a confirmation of how easily it spreads from person to person. But also, we found that individuals who get breakthrough infections, namely people who are vaccinated who might get infected, almost invariably they get either minimal symptoms or no symptoms at all. But since no vaccine is 100 percent affective, you're going to see breakthrough infections.

FAUCI: Well, the phenomenon of the ability to spread is clear, we're seeing that very, very clearly in a number of situations. When you look at the data that we have gotten from a single study so far -- and other studies are coming out -- you have a availability, but the mean – the sort of average, mean level of virus in the nasal pharynx is really quite similar, almost identical on an average.

So, you would think, obviously, when you have biological variability, you will have some people high some people low some people the medial, but the median or mean is going to be right there, which is very similar to the unvaccinated individual. Which is troublesome. Which tells you the potential for transmission is there.

DICKERSON: And that's why the mask guidance for those who have already been vaccinated because there are these cases in which it’s possible to spread?

FAUCI: Right. I mean, the situation is that if you get breakthrough infections in individuals who are vaccinated and they don't spread at all to anybody else, then you would not worry about if they went home to a vulnerable person in their household, children or an elderly person -- there wouldn't be any issue.

But since we know now that (a) They can transmit when they get breakthrough infections, even though they have minimal symptoms or no symptoms, and we know they can do it.  We know the mechanistic reason is that the level of virus is high, so you want to make sure they don't get infected. And that's the reason why and the fundamental basis for the CDC modifying their guidelines saying if you're in an area of a high or substantial level of virus, namely a red or orange zone, when you're in an indoor public setting, you need to wear a mask. That’s the fundamental reason for that change.

DICKERSON: And the question of mask mandates, Israel has reinstated those. Are you seeing the same thing that seems to concern officials here in the United States about those who are vaccinated being capable of spreading, and that that was a finding they hadn't seen here in the states before?

DR. SHARON ALROY-PREIS (Israeli Dir. Public Health Services): So, we are looking at that. We're trying to introduce back what we call the green pass, which means people can go into events with a certificate they have been vaccinated, or recovered individuals, or to be tested.

So, their ability to infect others is 50 percent lower than those who are not vaccinated.

So, it seems like breakthrough cases is a small set, and there is an even smaller set who might pass on infection to others. Is that the way you see it?

DR. SCOTT GOTTLIEB: That's right. We know there is more people with this delta variant who’ve been vaccinated who are probably spreading the infection, but it is still a very small percentage of people who are becoming infected after vaccination, and who then are going on to spread the infection to others.

Remember, the original premise behind these vaccines were that they would substantially reduce the risk of death and severe disease and hospitalization, and that was the date that that came out of the initial clinical trials. That premise is still fully intact.

DICKERSON: So, Dr. Fauci said they found in the Provincetown study that the amount of virus in the nasal pharynx is the same as somebody who had not been vaccinated. So, help me understand. That seems like, if there’s a breakthrough case, then you’ve got the ability to spread if it’s in the nasal pharynx, but then what Dr. Alroy-Preis was saying that it seemed like a much smaller group of people in the breakthrough category that could pass it on. So, help me understand maybe the disconnect between those too.

GOTTLIEB: Right. The CDC is inferring from this study that there’s a risk of transmission in vaccinated individuals. And effectively what they saw is what Dr. Fauci said, high levels of the virus in the nasal pharynx of individuals who are vaccinated and became subsequently infected, on par with the level of virus that you would see in someone who wasn't vaccinated.

But we know two things. First of all, nasopharyngeal swabs, the virus titers to see in those nasopharyngeal swabs while it is suggestive of someone's ability to spread the virus, it doesn't prove they're able to spread the virus. So, it is not a perfect correlate with your ability to transmit the virus or how contagious you are. You really want to measure virus levels in the lower airways because that’s where aerosols are created, and we know you spread this virus through aerosols.