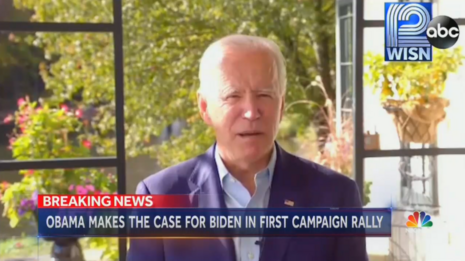 In a heated response Tuesday to a local Wisconsin reporter, Democratic presidential nominee Joe Biden finally addressed the bombshell Hunter Biden laptop scandal, which allegedly showed the former vice president getting a Chinese kickback funneled through his son. Despite Joe denouncing it as “a last-ditch effort in this desperate campaign to smear” him and his family, the Wednesday evening newscasts of ABC and CBS stayed far away from it, keeping Biden safely tucked away in a rhetorical basement.

MITCHELL: But sharply disputing accusations his son Hunter profited from the Biden name in his overseas business dealings.

BIDEN: It's a last-ditch effort in this desperate campaign to smear me and my family.

In contrast, ABC’s World News Tonight and the CBS Evening News provided no context as they boasted about the Biden campaign preparing for President Trump to bring up Hunter during the final debate on Thursday.

“On The View today, Jill Biden says she's prepared for the President to attack her husband and son, Hunter, but she calls it a distraction,” touted senior congressional correspondent Mary Bruce for ABC. For CBS’s part in the cover-up, White House correspondent Ben Tracy reported: “She [Sen. Kamala Harris (D-CA)] also says the Biden campaign plans to stick to the issues at tomorrow night's debate, where President Trump is expected to again go after Joe Biden's son Hunter.”

Hey Ben and Mary, why would Hunter be a topic of discussion at the debate? Maybe because the Director of National Intelligence and then the Department of Justice and FBI have confirmed the scandal was not “Russian disinformation” like you peddled with your baseless “speculation.”

In his latest (and now daily) update on the unfolding revelations in the scandal for Special Report, Fox News Channel’s senior political correspondent Mike Emanuel reported: “Now the FBI is responding in a letter echoing what DNI John Ratcliffe on Fox Monday, that the intelligence community doesn’t believe this is part of some Russian disinformation campaign.”

He added: “Senior U.S. officials say there is no evidence Hunter Biden's laptop and emails are part of a foreign influence campaign. And Fox News has confirmed the FBI is in possession of the laptop. But the FBI will neither confirm nor deny that Hunter Biden is under investigation.”

Fox News had also obtained an image of the apparent computer repair receipt with Hunter’s signature on it. They also had an email from a Chinese energy firm that detailed how money was allegedly given to Hunter to be funneled to his dad or “the big guy.” The validity of the email was confirmed by someone on the chain.

But according to new and disturbing reporting from the Washington Examiner: “Allegations that Hunter Biden stored photos of child pornography on his laptop computer have been forwarded to the FBI for investigation…”

These were highly damaging and disturbingly salacious allegations that struck the Biden campaign just days before the presidential election. And the liberal media were doing everything they could to try to cover it up and to insulate their candidate.

The broadcast network cover-up and defense of Biden was made possible because of lucrative sponsorships from WeatherTech on ABC, Febreze on CBS, and Fisher Investments. Their contact information is linked so you can tell them about the biased news they’re funding. CBS Evening News has also asked people to text anchor Norah O’Donnell at this number: (202) 217-1107.

MARY BRUCE: On The View today, Jill Biden says she's prepared for the President to attack her husband and son, Hunter, but she calls it a distraction.

ANDREA MITCHELL: But sharply disputing accusations his son Hunter profited from the Biden name in his overseas business dealings.

JOE BIDEN: It's a last-ditch effort in this desperate campaign to smear me and my family.