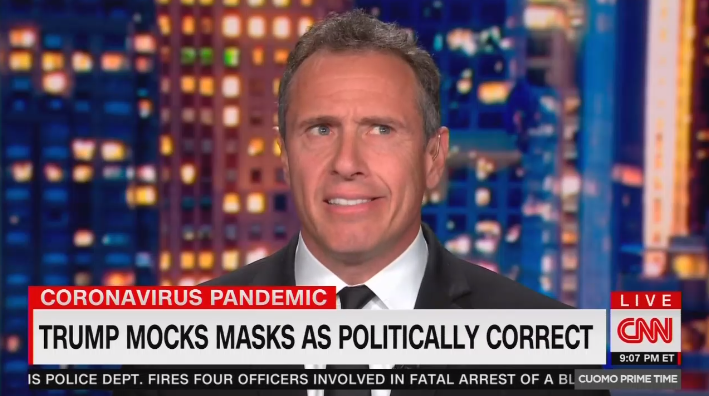 Hypocrisy must have been the main course at CNN host Chris “Fredo” Cuomo’s Memorial Day barbeque, because he was serving up leftovers during Tuesday’s edition of Cuomo PrimeTime. Cuomo, the guy who beclowned himself by twirling around giant cotton swabs and flouted his coronavirus quarantine when he knew he was infected, bashed President Trump with accusations of playing games and those who didn’t want to wear masks when they went outside. He also questioned the intelligence of the White House press secretary.

It was a week ago when Cuomo demonstrated how little he cared about the elderly New Yorkers affected by his brother’s order to put coronavirus patients in nursing homes. Instead of holding Governor Andrew Cuomo (D) accountable, Chris pulled out some giant prop cotton swabs and mocked the size of his brother’s nose. And it has been well documented (including in a police report), that Chris had left his house on Easter Sunday when he knew he was infected with the virus.

But those facts didn’t stop him from kicking off his show by lashing out at President Trump and accuse him of “playing games” while people died. “Nearly 100,000 Americans dead and this President is playing games over Joe Biden wearing a mask,” he sneered. Adding: “How about the clowns, who are ready to double down on the death toll because they want to get their party on for the holiday?”

“I could show you example after example after example of people acting like fools,” he ranted a couple of minutes later. “Not just, you know, not having any sense for their own safety but, the safety of others. And that's not loving misery. That is embracing the mentality of caring for other people.”

Really? Was it the “mentality of caring for other people” that led him to break quarantine (spreading it to, at least, his wife and kids) and verbally assail a 65-year-old man?

Minutes later, Cuomo cast his ire on White House Press Secretary Kayleigh McEnany, who once took him to task from the podium, by questioning her intelligence and education.

Following a clip of McEnany ripping former Vice President Joe Biden over his mask-wearing, Cuomo condescendingly chided her use of a certain word. “Discrepancy, big word,” he said. “Got to check that transcript about the time she spent at Harvard, I got to tell you, because that is just dumb, what was just said there.”

While we’re on that topic, please don’t take the advice of Cuomo’s wife and bath in Clorox bleach, which was what she told people to do on her blog.

At one point, he used a stereotypical dumb-sounding voice when answering a question as McEnany and had the nerve to accuse her of “poison politics. Us and them. Masks are dumb. Going out during the pandemic with no mask. Yeah, have fun. This is crazy town.”

And Cuomo should know a lot about “poison politics” since he's long trafficked in it. Just days ago, he suggested Trump’s goal was not to save lives, but cheapen the value of life in America. He also accused Fox News of being “okay with 10,000 more dead, especially from the “brown working-class.”

After insinuating that Republican convention delegates were unintelligent as well, he continued his attack against Republican-controlled Florida. “How many of them will then travel back to communities, all over this country, just like happened in Spring Break in Florida.”

Governor Ron DeSantis has handled the pandemic far better than Cuomo’s brother, and the numbers proved it. Recent research showed that New York was the state that seeded most of the outbreaks across the country, not Florida. He was again trying to deflect for his brother.

CHRIS CUOMO: I am Chris Cuomo and welcome to Prime Time. Nearly 100,000 Americans dead and this President is playing games over Joe Biden wearing a mask. Not to mention, millions of other Americans now doing the same. How about the clowns, who are ready to double down on the death toll because they want to get their party on for the holiday? Let's bring back Sanjay Gupta with some new information about the antibody tests that we're all hoping will help speed up or make more clear, our ability to get outside.

Let's forget this BS about who wants to reopen or not. We all want to reopen. We all want to see more of what we just showed you. The bid concern was proved out as well. How you reopen matters. I could show you example after example after example of people acting like fools. Not just, you know, not having any sense for their own safety but, the safety of others. And that's not loving misery. That is embracing the mentality of caring for other people.

Now, just to be fair, for every one of the examples I could show of doing it the wrong way, there are so many more who did it the right way. You wore the mask. Do you want to wear a mask? No. But is it that big a deal? Not really. Isn't it worth it just to get outside? You kept your distance. You acted like you had some sense. Like you care about somebody, other than yourself. Video of that isn't going to get played on loops or shared all over social media feeds but it should.

CUOMO: This is no longer about just setting a bad example. He’s now using the power of the White House to try to weaponize common sense.

PREE SEC. KAYLEIGH MCENANY: Look. You know, the President's excited to see that Joe emerged from the basement. It is a bit peculiar though, that in his basement, right next to his wife, he's not wearing a mask. But he's wearing one outdoors, when he's socially distanced. So I think there was a discrepancy there.

CUOMO: Discrepancy, big word. The follow-up question was, wait a minute isn't that about guidance? It’s not about what you do with family and people you’ve already been exposed to.

Got to check that transcript about the time she spent at Harvard, I got to tell you, because that is just dumb, what was just said there. You know what the guidance is. We're not asking you to wear masks in your basement, with your family. We all know that. Why would the Press Secretary mangle it? Poison politics. Us and them. Masks are dumb. Going out during the pandemic with no mask. Yeah, have fun. This is crazy town.

CUOMO: If you can't socially distance, you wear a mask when you're in close contact with people. Not in your basement. We need more of that. And less of people, who see this President and say stuff like this.

CUOMO: Any reporter knows you can always find people to give you a few absurd soundbites. I've never been a big fan of that type of reporting, to be honest. But how many of those people you think are going to flock to Charlotte if this President is able to bully his way to the made-for-TV moment he so craves: An arena packed with Republican delegates.

How many do you think will follow his lead on masks? You really think that guy is that unique? How many of them will then travel back to communities, all over this country, just like happened in spring break in Florida.

Now, look. They may not want to count people who get sick and die in that state, if they're not permanent residents. Weird in Florida, with all those snowbirds. What a nice choice for them to make. But then everybody else goes back home. What about everywhere else? What about everyone else? You don't have to be the chief doctor to know that is a recipe for harm. 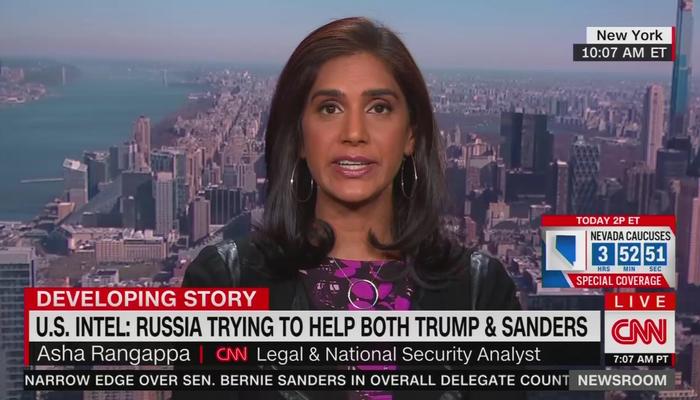 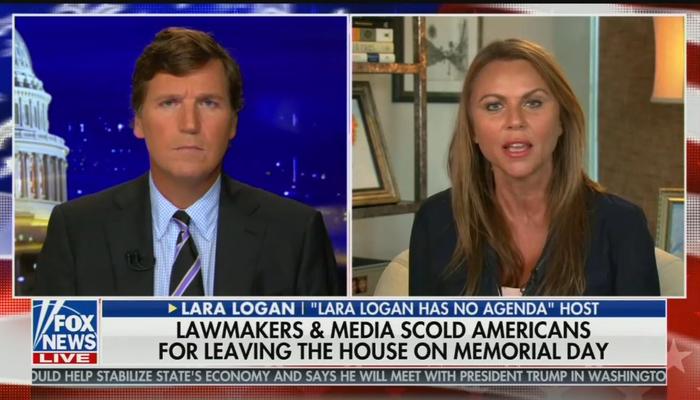 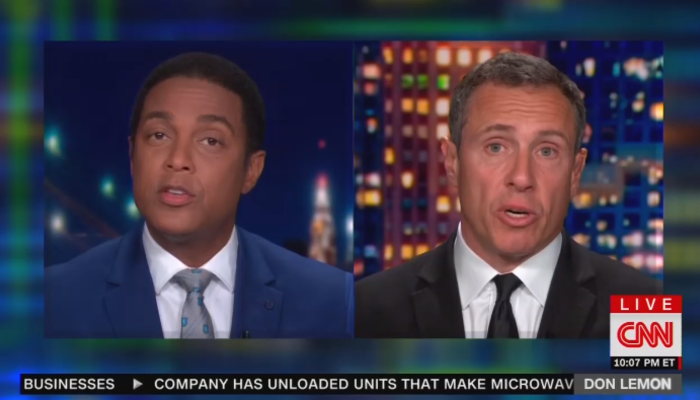