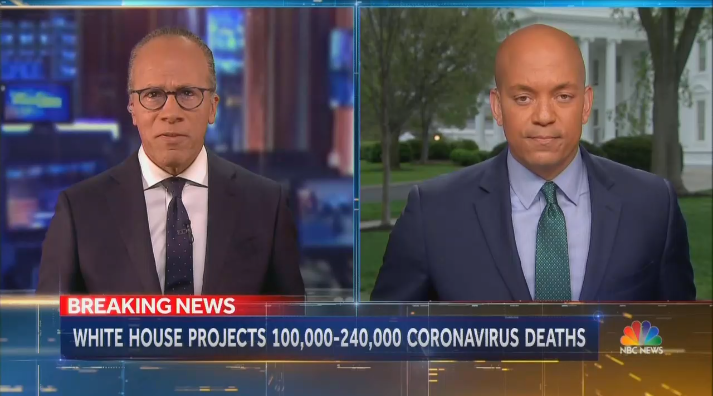 The liberal media’s fear-mongering has gotten out of control. Watchers of Tuesday’s NBC Nightly News were given the impression that the Trump administration was content with anywhere between 100,000 and 240,000 Americans dying to the coronavirus in the next few weeks. That’s because correspondent Geoff Bennett flagrantly lied and claimed that projection was their “best-case scenario.” In reality, it was far from it.

Bennett’s false claim came at the tail end of a report where he suggested President Trump’s team of medical professionals had to battle with him to keep social distancing policies in place. “As the administration considers next steps, the White House is now projecting that the country could see between 100,000 to 240,000 deaths resulting from this pandemic. That's a best-case scenario. Underscoring the stark reality of this crisis,” he told anchor Lester Holt.

Holt himself seemed caught off guard by Bennett’s claim, as he stared blankly before saying he “[s]till can't wrap [my] mind around those numbers.”

Meanwhile, on the CBS Evening News, they too hyped the projected death toll with anchor Norah O’Donnell declared “today is the day the reality of the staggering death toll hit hard at the White House…” But White House correspondent Weijia Jiang played a soundbite of Dr. Anthony Fauci explaining how they did not accept the project and were working hard to get the number lower:

Our hope is to get that down as far as we possibly can. The modeling that Dr. Birx showed predicts that number that you saw. We don't accept that number that that's what it's going to be. We're going to do everything we can to get it even significantly below that.

There was similar fear-mongering on ABC’s World News Tonight from anchor David Muir. “In fact, at one point, they said the current projection showed that even if we all adhere to the social distancing guidelines, the number could be even higher as many as 240,000 dead according to the models they're looking at right now,” he said speaking about Trump’s team. But there was never a mention of what Dr. Fauci said.

Shortly before the broadcast networks went to air at 6:24 p.m. Eastern (over 30 minutes before NBC Nightly News went to air in the Washington D.C. market), Dr. Fauci had explained to the press how the projection will change as they get more data. “What we do is that every time we get more data, you feed it back in and relook at the model. Is the model really telling you what's actually going on,” he said.

He added: “And again, I know my modeling colleagues are not going to be happy with me but models are as good as the assumptions you put into them. And as we get more data, then you put it in and that might change. So, even though it says according to the model which is a good model that we’re dealing with, this is full mitigation. As we get more data as the weeks go by, that could be modified.”

So, clearly, Bennet’s declaration that a six-digit death toll was the Trump administration’s “best-case scenario” was total bunk.

LESTER HOLT: Tonight, a stark new warning from President Trump about the need to continue social distancing. The President saying it's going to be a very painful two weeks. Our Geoff Bennett is at the White House.

PRESIDENT DONALD TRUMP: I want every American to be prepared for the hard days that lie ahead. We're going to go through a tough two weeks. [Transition] This is going to be a very painful- a very, very painful two weeks.

BENNETT: The President's top medical experts sharing with the nation the stark projections, as they shared with him and they aggressively pushed the President to extend those social distancing guidelines through the end of April.

BENNETT: As the administration considers next steps, the White House is now projecting that the country could see between 100,000 to 240,000 deaths resulting from this pandemic. That's a best-case scenario. Underscoring the stark reality of this crisis. Lester?

HOLT: Still can't wrap my mind around those numbers. But thank you, Geoff.