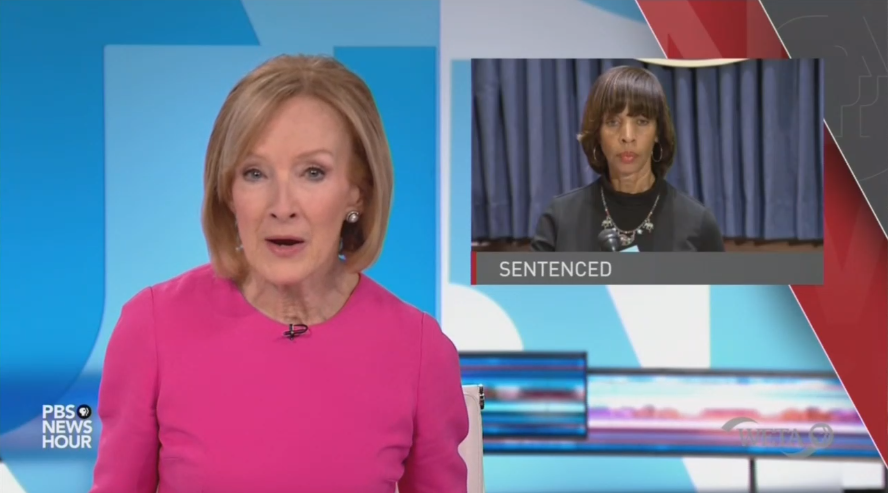 The broadcast networks weren’t really interested when ex-Democratic Mayor of Baltimore Catherine Pugh was raided by the FBI and the IRS in April of last year amid charges of corruption, nor when she was forced to resign just a few days later. So, it’s not surprising that ABC, CBS, and NBC completely ignored her pleading guilty and sentenced to three years in prison on Thursday.

Previously, CBS had skipped news of the raid against Pugh while ABC and NBC failed to mention she was a Democrat. Then, ABC was the only broadcast network to inform viewers of her resignation, but they again refused to note her party affiliation.

Fortunately, PBS’s News Hour and anchor Judy Woodruff decided that Pugh’s sentencing was worth some airtime.

“Former Baltimore mayor Catherine Pugh was sentenced today to three years in federal prison, for a scam involving her children's books. The veteran Democrat earned hundreds of thousands of dollars in fraudulent sales of the books. She pled guilty to conspiracy and tax evasion,” Woodruff reported.

But there was more to tell in regards to what the court had ordered Pugh to do. According to a FoxNews.com article about the sentencing, the ex-mayor had to pay back a boatload of money and have copies of her book destroyed:

Pugh was ordered to pay restitution of $400,000 to the University of Maryland Medical System and nearly $12,000 to the Maryland Auto Insurance Fund, which also purchased her books, the Baltimore Sun reported. The former mayor also must forfeit nearly $670,000 and $17,800 in her campaign account. All copies of “Healthy Holly” books in government custody will be destroyed.

The article also noted the harsh criticism the judge had for Pugh’s actions. “It is astounding and I have yet frankly to hear any explanation that makes sense,” Maryland U.S. District Court Judge Deborah K. Chasanow declared. “This was not a tiny mistake, lapse of judgment. This became a very large fraud. The nature and circumstances of this offense clearly I think are extremely, extremely serious.”

Instead of reporting on the corrupt Democrat, ABC’s World News Tonight and NBC Nightly News were busy trying to stoke fears of the Trump administration’s response to the coronavirus and Vice President Mike Pence’s leadership of the task force assigned to address the issue. For CBS Evening News’s part, anchor Norah O’Donnell thought it was more important to focus on drama from the British royal family.

JUDY WOODRUFF: Former Baltimore mayor Catherine Pugh was sentenced today to three years in federal prison, for a scam involving her children's books. The veteran Democrat earned hundreds of thousands of dollars in fraudulent sales of the books. She pled guilty to conspiracy and tax evasion.