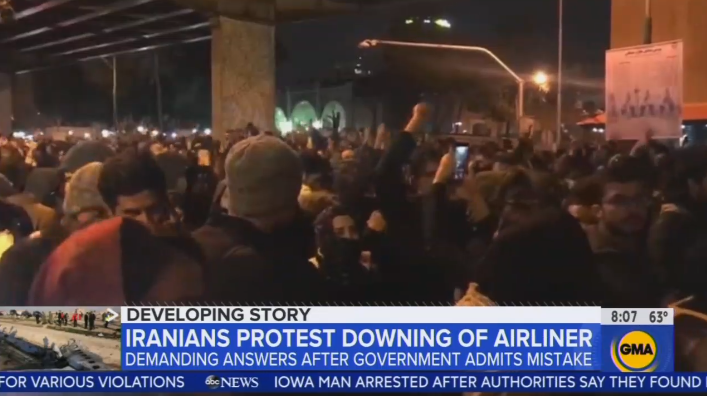 Overnight, students of Iran’s polytechnic university in Tehran put their lives on the line by taking to the streets to call for an end to the radical regime ruling the country. It was a massive blow to the liberal media’s false narrative that the U.S. killing of General Qasem Soleimani somehow “united” Iranians. To further prove their initials stood for Ayatollah Broadcasting Company, the Sunday edition of ABC’s Good Morning America downplayed the protests as just the wild emotional throws of a people, even spending more time on frivolous nonsense such as British royal family and the Oscars.

All told on Sunday, ABC spent just one minute and 34 seconds on the anti-regime protests in Iran. That’s way more than the zero ABC gave to similar protests back in November, which ended with Soleimani’s forces massacring 1,500 people. In contrast, ABC spent two minutes, 22 seconds gushing about the drama going on with the British royal family and two minutes, 39 seconds hyping the Oscars, which they’re hosting.

At the top of their coverage, co-anchor Eva Pilgrim understated the student’s reasons for protesting and made it seem as though the people didn’t know what they wanted to be angry at. “On a dime, it seems, the Iranian national rage at the U.S. for killing General Qasem Soleimani has been overwhelmed by anger at their own government for mistakenly shooting down that Ukrainian airliner,” she said.

Of course, that’s was a condescending attempt to square their false claims of Soleimani’s death “uniting” Iran with the reality that many more people hated the regime. That’s not to mention the regime had forced many people to attend the mourning events as part of their propaganda push to the Western press, which they ate hook, line, and sinker.

“Overnight, thousands of Iranians protesting in the streets. Not against America, but now against their own government,” added a shocked-sounding Stephanie Ramos during her report. “Outraged over Iran's stunning reversal and admission that its military unintentionally shot down the passenger jet in Tehran Wednesday.”

ABC completely avoided sharing any of the anti-regime chants the students were shouting, but they sure loved to share anti-Trump and anti-GOP chants from leftist here in the U.S. And while Ramos did read from a tweet President Trump sent out supporting the protesters, she ignored the one that mentioned Soleimani’s killing of civilians.

In a series of tweets overnight, Iranian journalist and activist Masih Alinejad shared videos taken by the protesters. Translating one of the chants, she reported they said: “The regime told us our enemy is the US. But actually, our enemy is right here.” BBC reporter Ali Hamedani had a video from high above the gathering and he reported they were chanting: “Death to the Islamic Republic.”

ABC might not have liked that last part seeing as they thought chants of “Death to America” were “powerful” and “profound.” Compare that to another video Alinejad shared featuring students who refused to trample images of the American and Israeli flags that were painted on the ground.

A few minutes later, ABC circled back around to the Iranian protests when chief anchor George Stephanopoulos was asked by co-anchor Dan Harris to give his take. The Clinton lackey appeared to flash ABC’s thoughts on the matter when he described the regime’s shootdown of a passenger jet and the protesters as “complicating factors.”

EVA PILGRIM: Well, now to out other big story this morning. On a dime, it seems, the Iranian national rage at the U.S. for killing General Qasem Soleimani has been overwhelmed by anger at their own government for mistakenly shooting down that Ukrainian airliner. Protesters taking to the streets. That’s, as Americans assess President Trump's handling of the drone strike that killed Soleimani. A new ABC News/IPSOS poll suggests more than a half of Americans disapprove of how the President dealt with the situation and say they think killing Soleimani has made the nation less safe. More now from ABC's Stephanie Ramos. Good morning to you, Stephanie.

STEPHANIE RAMOS: Eva, good morning. After days of denial, Iran finally admitted to shooting down that passenger jet over Tehran. Which has sparked those protests across the region. Iranians are upset with its government over what they see as an initial cover-up.

Overnight, thousands of Iranians protesting in the streets. Not against America, but now against their own government. Outraged over Iran's stunning reversal and admission that its military unintentionally shot down the passenger jet in Tehran Wednesday.

President Trump tweeting directly to the Iranians in both Farsi and English. Writing, “To the brave, long-suffering people of Iran. I've stood with you since the beginning of my presidency and administration will continue to stand with you. We are following your protests closely and are inspired by your courage.

DAN HARRIS: Let's loop back to this situation in Iran, I know you have the President's national security adviser on the show this morning. What's your sense on where things stand at this point?

GEORGE STEPHANOPOULOS: Well, it appears that after the Iranian strike in the middle of the week that the tension between the United States and Iran had calmed down a little bit. But the fact that this airplane has gone down and you're seeing these protests in the streets of Iran right now are real complicating factors. You saw President Trump tweet out this morning support for those protesters. What happens if that regime goes down? Will they lash out in other ways and in other places? A lot of unknowns going forward.