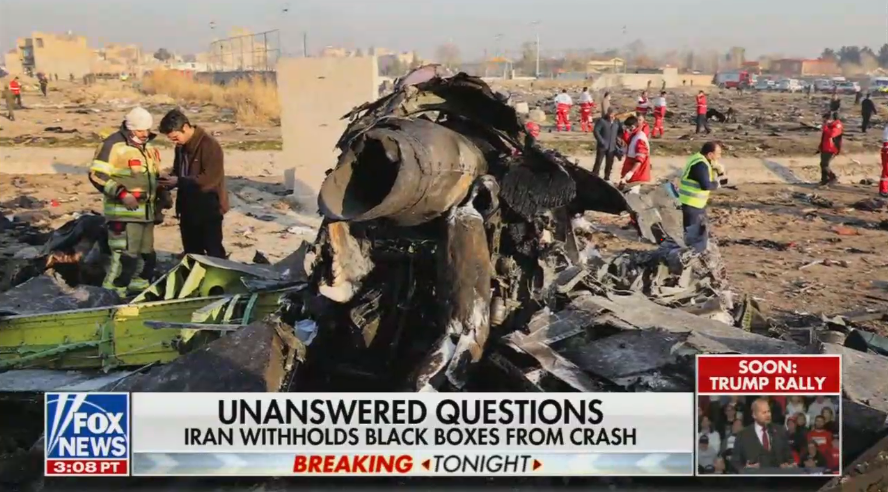 In a Thursday night article originally titled “An Iranian general dies in a U.S. attack, and Canada suffers,” the Associated Press made it abundantly clear who they blamed for the deaths of 176 people in the skies over Tehran. (Hint, it wasn’t the country that shot two surface-to-air missiles at a passenger jet.)

“The worst had passed, it seemed, and the United States and Iran no longer appeared poised at the edge of war,” authors Rob Gillies and Tim Sullivan began with an unhealthy amount of snark. The duo then recalled that President Trump put out a tweet following Iran’s missile attack declaring “all in well” because there were no American casualties. They didn’t wait long to turn that back on the President.

As if President Trump was al knowing and willfully made a heartless statement, the AP chided him by noting:

But 27 seconds before Trump’s tweet, commercial flight trackers lost contact with a Ukrainian International Airlines jet that had just taken off from Tehran’s main airport. On board[sic] were 176 people, including at least 138 passengers on their way to Canada and at least 63 Canadian citizens. The plane appeared to get hit in the air, then slammed into the ground.

How was Trump supposed to know the jet was hit at that time? “Everyone on board died,” they continued. “They were students, newlyweds, doctors and parents. The youngest was a 1-year-old girl, Kurdia Molani, who was flying back with her parents to their home in the Toronto suburb of Ajax.”

What came next was an attempt at revisionist history that completely disregarded the loss of an American life and Iran’s war-like actions leading up to the tragedy.

“What began with a drone attack on Gen. Qassem Soleimani’s motorcade at the Baghdad airport had rippled outward until dozens of Iranian-Canadians, and dozens of Iranian students studying in Canada, were dead,” Gillies and Sullivan falsely claimed.

Back in reality, this latest back and forth between the U.S. and the radical and murderous Iranian regime began before the New Year, when Iranian-directed proxies killed an American contractor. Iran later had their proxies assault and attempted to invade the U.S. Embassy in Baghdad.

Of course, the first reaction they shared was from a person who blamed Trump for Iran’s actions:

Some in Canada blamed Trump for the disaster.

“This is insane. Sickening. Imagine having a family member on that plane,” said Rob Kent, a 42-year-old Toronto resident. “One man, and only one, is responsible for those deaths. And he will never face consequences for them.”

The Associated Press's stealth edits went even further in glorifying the Iranian regime; this time in the form of promoting the unfounded conspiracy theory that the missile attack on U.S. bases in Iraq purposely designed to not kill anyone. They also lied and claimed: "By Thursday night, Trump had yet to mention Canada’s tragedy." Even with the stealth edited headline, they still managed to make the report worse.