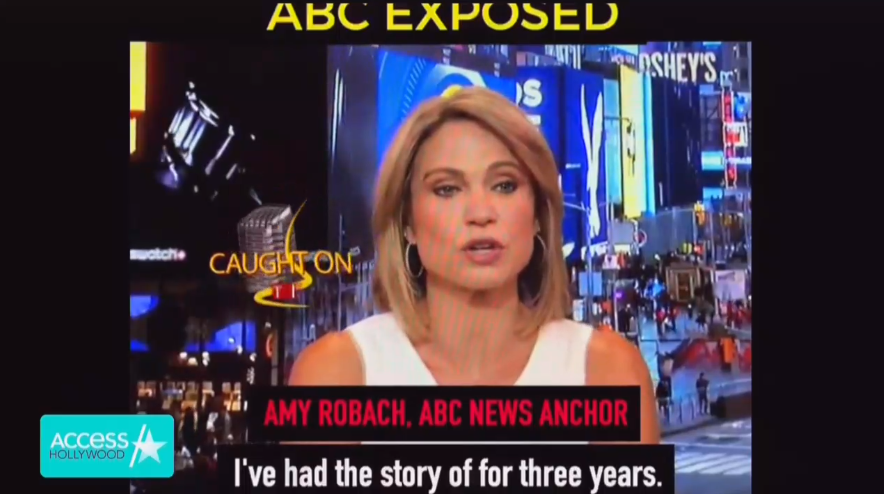 ABC News found itself embroiled in a dark scandal Tuesday, after a leaked video of network anchor Amy Robach was released showing her admitting ABC had killed her story, which would have exposed additional pedophile allegations against investor Jeffrey Epstein. The network’s only response, so far, was to release a week statement on Twitter claiming the story was not ready for airtime. And come that evening’s World News Tonight, the network refused to address the scandal.

Instead of explaining to views why the network decided to put protecting the Clintons and the network’s access to the British royal family above seeking justice for alleged sex crime victims, anchor David Muir treated it as an average night.

According to ABC’s Tuesday evening newscast lineup, these stories where more important than addressing their scandal: the weather, a local story about a hit and run, a local story about a zip line accident, a house that had been hanging off a cliff for months finally getting torn down, CVS delivery drones, and a cat on the field during Monday Night Football.

And while the hit and run and zip line accidents were tragic, they did not rise to the level of being national stories.

While ABC’s blackout was terrible, the newscast coverage of the scandal from CBS Evening News and NBC Nightly News wasn’t any better, seeing as that didn’t exist either. NBC eventually got around to covering the story, but it was relegated to their celebrity gossip show, Access Hollywood in a report by host Mario Lopez.

To Lopez’s credit, he did treat the story with a serious gravitas. “We're going to begin with the apparent conspiracy of silence surrounding Jeffrey Epstein. A leaked video shows ABC News anchor Amy Robach caught on a live mic saying her ABC bosses killed her Epstein story, which could have exposed him three years ago,” he began.

After playing a clip of the leaked video, Lopez added: “That’s a frustrated Robach just three months ago, venting on a hot-mic that ABC News quashed her story. You'll remember Virginia Roberts is the woman who alleged Epstein used her as a teen sex slave and trafficked her to his famous friends, including Prince Andrew.”

This accountability blackout from ABC was the second incident in less than a month where the network flat-out refused to give an on-air explanation for how they so royally botched a major story. Back on October 14, Muir refused to address how the network aired footage from a gun range in Kentucky claiming it was battlefield video from the Turkish invasion of Syria.

On Wednesday morning, New York magazine contributor Yashar Ali reported on Twitter that ABC told him that they do not plan to address the scandal on-air. "It's rather extraordinary that the news division of one of the three broadcast networks is not going address a major controversy involving a huge story by either having someone read a statement on air but more importantly with having one of its reporters cover it as a story," he said.

He then noted: "It appears that ABC News is trying to sweep this controversy under the rug by refusing to address this matter on-air and by declining to cover it as a news story. They have not denied the legitimacy of the video."

MARIO LOPEZ: We're going to begin with the apparent conspiracy of silence surrounding Jeffrey Epstein. A leaked video shows ABC News anchor Amy Robach caught on a live mic saying her ABC bosses killed her Epstein story, which could have exposed him three years ago.

AMY ROBACH: “I’ve had the story for three year. I’ve had this interview with Virginia Roberts. We would not put it on the air.

LOPEZ: That’s a frustrated Robach just three months ago, venting on a hot-mic that ABC News quashed her story. You'll remember Virginia Roberts is the woman who alleged Epstein used her as a teen sex slave and trafficked her to his famous friends, including Prince Andrew.

ROBACH: Then the palace found out that we had her whole allegations about Prince Andrew and threatened us in a million different ways. It was unbelievable what we had: Clinton, we had everything.

LOPEZ: Robach quickly issued a statement saying her comments were made in a “private moment of frustration,” and that, quote, her “comments about Prince Andrew and her” Virginia's “allegation that she had seen Bill Clinton on Epstein's private island were in reference to what Virginia Roberts said in that interview in 2015. I was referencing her allegations - not what ABC News had verified through our reporting.”

ELIZABETH WAGMEISTER: I don't think this was at all intentional that Amy wanted to get her feelings out.

LOPEZ: Some have suggested Amy may have spoken out on purpose in hopes that others hearing her grievance. Variety’s senior correspondent Elizabeth Wagmeister disagrees.

WAGMEISTER: I'm sure that she is now wishing she do not speak. But we have to remember that the workplace for broadcasters is an atypical workplace. They always have a mic on them. And even if you’re the most skilled broadcaster, you can forget that you have a microphone on you at all times.

ROBACH: I tried for three years to get it on, to no avail. Now it's all coming out. And it’s like these new revelations and I freaking had all of it. I'm so pissed right now.

WAGMEISTER: What we're seeing here now with ABC does strikes a lot of similarities with what we’ve seen play out in the press recently at NBC. You know, Ronan farrow has been saying for years now, that NBC squashed his reporting on Harvey Weinstein. NBC, of course, has denied that strongly and fiercely. But we are seeing some parallels here with what Amy Robach was caught saying on tape, if it's true that ABC did quash a story about Jeffrey Epstein.

LOPEZ: Though the outburst happened in August, it was published today by Project Veritas, a right-wing activist group, claiming the tape was leaked to them by an ABC News insider. ABC News says in a statement, “At the time, not all of our reporting met our standards to air, but we have never stopped investigating the story. Ever since we’ve had a team on this investigation and substantial resources dedicated to it. That work has led to a two-hour documentary in six-part podcast that will air in the new year.”

And as far as Prince Andrew, he continues to deny the allegations. Yesterday, he was in Bangkok meeting with business entrepreneurs.