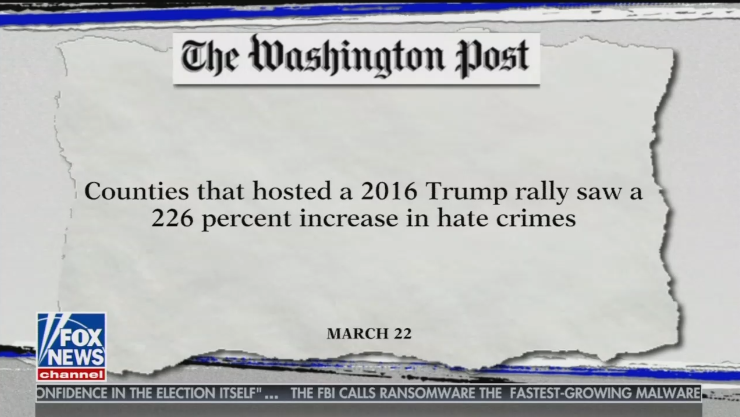 It was an anti-Trump statistic beloved by the liberal media. According to a study pushed by CNN, The Washington Post, and many others, President Trump’s 2016 campaign rallies caused a 226 percent spike in hate crimes in the areas they were held.

Of course, the liberal media would run with that statistic. It fit their narrative perfectly: Racist Trump inspires his racist supporters to commit racist crimes.

According to Lilley and Wheaton, using the methods of the original study, they were able to closely replicate the findings. But they took it a step further and applied that method to the places where failed Democratic candidate Hillary Clinton held her rallies. What did they find?

“Using additional data we collected, we also analyzed the effect of Hillary Clinton's campaign rallies using the identical statistical framework. The ostensible finding: Clinton rallies contribute to an even greater increase in hate incidents than Trump rallies,” they wrote.

Through their work, the Harvard students found two flaws in the original methodology: that rallies are held in populated areas and it’s not “sensible” to blame rallies for hate crimes. Here are their comments on that (click “expand”):

Probably not. Both of these results rely on comparing counties with rallies to other counties without them. This produces a glaring problem. Politicians tend to hold political rallies near where large numbers of people live. And in places with more people, the raw number of crimes is generally mechanically higher. Simply put, no one should be surprised that Orange County, California (population 3.19 million) was home to both more reported hate incidents (5) and Trump rallies (2) than Orange County, Indiana (population 19,840, which had zero of each).

Nor is it sensible to interpret that one of these differences (hate crimes) is caused by the other (political rallies). Indeed, adding a simple statistical control for county population to the original analysis causes the estimated effect of Trump rallies on reported hate incidents to become statistically indistinguishable from zero. The study is wrong, and yet journalists ran with it anyway.

“How could this happen,” the duo rhetorically asked. “Even if researchers attempt to be unbiased, it is easy for ideology to interfere with the practice of the scientific method … The hypotheses that researchers choose to test often reflect their beliefs, and when initial statistical findings do not match the researcher's gut intuition, it is easy to tweak these choices until the analysis ‘works.’”

In Soave’s research, he found major flaws with the debunked study’s one and only source for its input data.

“The authors' sole source of data is the Anti-Defamation League's 2016 report on hate, extremism, anti-Semitism, and terrorism,” he discovered. “This lists 1,321 anti-Semitic incidents reported to the organization in 2016. There are two important things to keep in mind here: 1) the list's focus is anti-Semitism, and 2) many of the incidents on the list are not actually hate crimes.”

Soave also noted that when he reached out to the original study’s authors, they weren’t immediately forthcoming with their full research despite them enjoying wide-ranging media coverage of the findings:

When I reached out to the study's authors some months ago, Feinberg explained that the study had not yet been peer reviewed, and thus he couldn't release it to me. (This was frustrating, given that the study's findings were already being reported as if they were unimpeachable.) But after the second round of media coverage, Feinberg's team released it.

Now, given the findings of Lilley and Wheaton, it’s highly unlikely that the liberal media will sprint to blame Clinton for causing hate crimes or correct their original reporting.