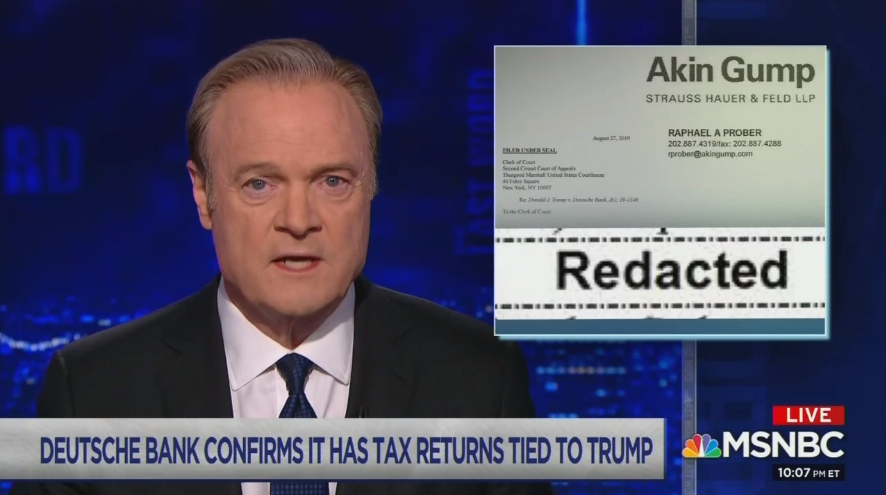 MSNBC host Lawrence O’Donnell was overjoyed Tuesday night, as The Last Word came on the air, because according to an unnamed source that talked to no one but him, President Trump’s loan from Deutsche Bank was allegedly co-signed by Russian oligarchs. It was a scoop that had to be retracted less than 24 hours after it’s utterance on national TV because its validity could not be verified.

The shakiness of the accusation was apparent all day Wednesday since it was not a talking point on any of MSNBC’s programs. Then, with the threat of a defamation lawsuit from the President’s lawyers bearing down on the network, O’Donnell was forced to admit his folly in an embarrassing tweet:

Last night I made an error in judgment by reporting an item about the president’s finances that didn’t go through our rigorous verification and standards process. I shouldn’t have reported it and I was wrong to discuss it on the air. I will address the issue on my show tonight.

But just a few hours prior, O’Donnell was pitching it to fellow MSNBC host and conspiracy theorist, Rachel Maddow as the next thing to blow up Trump’s presidency. And Maddow was stunned by what she heard (click “expand”):

O’DONNELL: And this single source close to Deutsche Bank has told me that the Trump –Donald Trump’s loan documents there show that he has co-signers. That’s how he was able to obtain those loans. And that the co-signers are Russian oligarchs.

O’DONNELL: That would explain, it seems to me, every kind word Donald Trump has ever said about Russia and Vladimir Putin, if true, and I stress the “if true” part of this.

Despite qualifying the accusations as “if true,” they were the main theme of his show that night and were a well he repeatedly returned to; treating them as if they were cold hard facts. “If true. If true, that would be a significant factor in Vladimir Putin’s publicly stated preference for presidential candidate Donald Trump over presidential candidate Hillary Clinton,” he declared.

“And I want to stress, that’s a single source. This has not been confirmed by NBC News. I have not seen any documentation from Deutsche Bank that supports this and verifies this,” he admitted at the end of his show.

MSNBC repeated declined to publically comment on the unverified allegations pushed by their prime time host.

Over the course of Wednesday, lawyers for President Trump sent a letter to NBC Universal executives “demanding an apology and retraction for what it called ‘false and defamatory, and extremely damaging’ comments,” as reported by Fox News.

The letter blasted NBC for how O’Donnell went about researching and peddling the accusations (click “expand”):

These statements are false and defamatory, and extremely damaging. The only borrowers under these loans are Trump entities, and Mr. Trump is the only guarantor. Numerous documents for each of these loans are also recorded, publicly available and searchable online. Thus, actual malice can easily be proven based on your reckless disregard of the truth and unreasonable reliance on an alleged ‘source’ who you will not even identify in your story and likely is seeking to mislead you and the public for political reasons or other ulterior motives

The letter also threatened that Trump’s legal team would “pursue all available causes of action and seek all available damages and other legal remedies to the maximum extent permitted by law,” if the NBC refused to apologize and retract the story.

This wasn’t the first time the liberal media have botched a story dealing with Trump’s finances and Deutsche Bank. Back in 2017, Bloomberg falsely reported that special counsel investigators were subpoenaing Trump’s bank records: “But within a day, the media had to backpedal, as the request was apparently not for the President’s personal records, but only for ‘documents and data related to people or entities affiliated with Trump’ (as the Wall Street Journal’s revised article put it).”

So far, there has been no word out of MSNBC about any sort of punishment or disciplinary action against O’Donnell. But given how they’ve retained Brian Williams, and rewarded him with a show after being disgraced and discredited for his egregious lies, it’s likely the network won’t do anything. It will be interesting to hear what O’Donnell has to say during his program Wednesday night.

RACHEL MADDOW: That’s gonna do it for us tonight. We will see you again tomorrow. Now it’s time for The Last Word with Lawrence O’Donnell. Good evening, Lawrence.

LAWRENCE O’DONNELL: Good evening, Rachel. And I was watching everything you had to say about Deutsche Bank in the last hour. And especially great to hear the audio of the lawyers in court. And the lawyer representing the House saying they really need to know how Donald Trump was able to obtain loans when no one else would loan him any money. And there it is right there in court as one of their main motivators for getting at this information. I may have some information in this next hour which would add a great deal to their understanding of that, if true, and I'll be discussing it here in the beginning of the show. I want to get your reaction to it now.

O’DONNELL: Because I don’t want you to leave the building.

O’DONNELL: And hear about this later because no one knows more about this subject than you do, so I want to get your reaction to what it could mean if true, and I stress “if true” because this is a single source.

O’DONNELL: Who has told me that the Deutsche Bank obtained tax returns, which they do have, of Donald Trump’s, show that the President pays very little income tax.

O’DONNELL: And this single source close to Deutsche Bank has told me that the Trump –Donald Trump’s loan documents there show that he has co-signers. That’s how he was able to obtain those loans. And that the co-signers are Russian oligarches.

O’DONNELL: That would explain, it seems to me, every kind word Donald Trump has ever said about Russia and Vladimir Putin, if true, and I stress the “if true” part of this.

MADDOW: Yeah, that is a scenario that I have never contemplated. Let alone, like, gamed out in detail. But, you know, there is – there clearly is some presidential anxiety around his tax returns for sure. The specificity of his relationship with Deutsche Bank is something that has never been explained. There particularly seems to have been some compartmentalization even inside Deutsche Bank, which appears to be a disaster of a bank, in that what was going on between him and the private banking division at Deutsche Bank appears to have been something of a mystery to other parts of Deutsche Bank, even to the point where the bank didn't necessarily know how much it had outstanding in terms of Donald Trump loans, very late in the game in terms of his political career. So, I mean, that obviously would be absolutely flummoxing, but I don’t know, I’m going to now sit and watch your show.

O’DONNELL: It would – it would test the Trump theory that he could shoot someone on Fifth Avenue and his supporters would still be with him. It would.

O’DONNELL: It is. Thank you, Rachel.

JOHN HEILEMANN: And, you know, you think about this, Lawrence, you know, there have been so many instances in which people who are trying to get to the bottom of what’s going on with Donald Trump, particularly the key question, which is like why – what’s the deal with Donald Trump and Russia and Vladimir Putin? Why is he trying to get him into the G – back into the G8 – what would be the G8 if Russia came back? What was all the contact about in the election? All these mysteries, right? This, if true, and you said “if true” before –

HEILEMANN: Got to stress “if true” at this point, but if true, the reporting that you have from your source, it’s the skeleton key, right, that opens –

HEILEMANN: That picks the lock on so many fundamental mysteries of the Trump era. The ones we thought Robert Mueller was going to answer and we now know that the reason that Robert Mueller didn’t answer them, all the connections, the nexus with Russia on a million levels, political, financial, security, everything else, criminal potentially, was because he was basically told he couldn’t look at that stuff. This was the stuff he wasn’t allowed to go searching for. He couldn’t look for the skeleton key. So now, if we have the skeleton key, it picks a lot of locks and answers a lot of questions and it also puts Trump in an incredibly difficult place politically partly because we are now barreling towards a re-election campaign, but we’re also on the clock for the impeachment hearings. We also know it’s almost Labor Day. We know decisions have to get made. And in this narrative, at this moment, if the skeleton key suddenly were to emerge, it would, I think, make impeachment proceedings absolutely inevitable starting this fall.

O’DONNELL: And it would fast track them.

O’DONNELL: If true. The key words of this opening discussion tonight are “if true.”

O’DONNELL: And before we go tonight, I want to go back to where we began at this hour when we added some elements to the reporting about Deutsche Bank’s filing in court today about the possibility of Deutsche Bank having copies of Donald Trump’s tax returns. As I said at the beginning of this hour, and I want to say this carefully, a source close to Deutsche Bank revealed to me, a single source close to Deutsche Bank, that Donald Trump’s tax returns show that he pays very little income tax and, more importantly, that his loans with Deutsche Bank have Russian co-signers. And I want to stress, that’s a single source. This has not been confirmed by NBC News. I have not seen any documentation from Deutsche Bank that supports this and verifies this. This is just a single source who has revealed that to me. And that’s where that stands at this point. It’s going to need a lot more verification before that can be a confirmable fact.