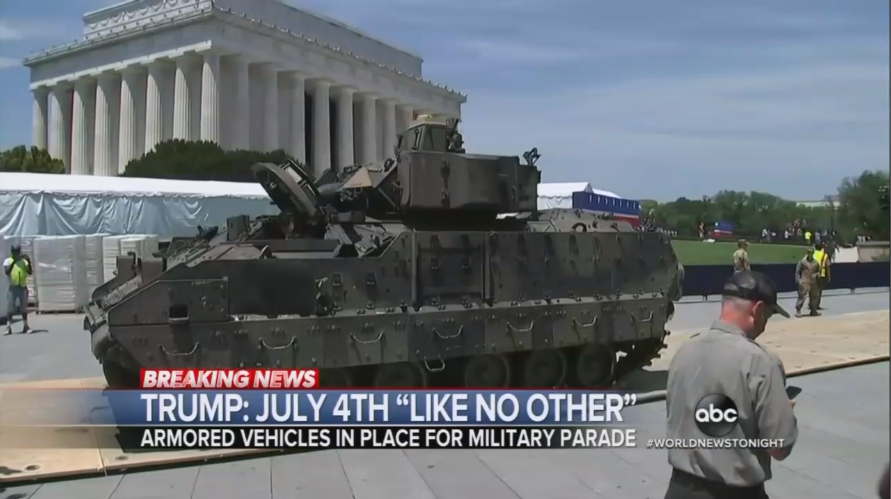 It was the day before America’s birthday and the liberal media was still decrying President Trump’s “Salute to America” celebration on the National Mall. While they were suddenly concerned about federal government spending (after not caring about it during the Obama years), ABC and CBS suggested Trump was “muddying” the holiday by constructing a “Trump-focused campaign-style rally” for himself.

As if they rolled in to conquer Washington D.C., ABC correspondent Stephanie Ramos began her World News Tonight report by dramatically declaring: “Tonight, armored combat vehicles on the National Mall. President Trump promising, quote, ‘The show of a lifetime.’ The military hardware moved in overnight on flatbed trucks.”

“The President's opponents fear he's turning a traditionally nonpartisan event into a Trump-focused campaign-style rally,” she suggested, because “the White House has given VIP tickets to the Republican National Committee and top donors.” Yet, Obama treated his top donors and celebrity friends like VIPs with special invitations to White House events. Speaking of which, CBS This Morning co-host Gayle King was one such person.

California Senator Kamala Harris (D) appeared to the liberal media’s favorite for president after the first round of debates. So, it was no surprise that Ramos played a soundbite of the Senator chiding the President’s plans. “I don't think he understands this is America's birthday, not his birthday,” Harris said.

Ramos also huffed about the cost of the event:

But tonight, there are new questions about the cost of this extravaganza. The National Parks Service is reportedly diverting $2.5 million from improvement projects. The Pentagon hasn't put a number on its contribution. And the administration won't give us a price tag. But today, the President tweeting, "The cost of our great salute to America tomorrow will be very little compared to what it's worth."

Judging by the way the liberal media had been fretting about the presence of armored personnel carriers and Abrams main battle tanks at the event, it’s almost as if they’ve never been to any local government facility throughout the country where people can see cannons and howitzers on display. At times, the media almost seemed afraid to have the military on the National Mall. What’s that about?

After not caring about federal government spending for eight years, the liberal media had been watching Trump’s spending like fiscal hawks.

This time they were upset that the National Parks Service was contributing $2.5 million to help pay for the event. But just four months ago, they had a meltdown because Education Secretary Betsy DeVos proposed to cut $18 million from the Special Olympics, a Kennedy owned organization that got 90 percent of its fund from private sources.

Ramos noted that “the Pentagon hasn't put a number on its contribution”, but ABC (nor any of the major broadcast networks) didn’t give any airtime to the fact that the Pentagon wasted $4.6 million on lobster tail and crab dinners in one month. That certainly could have covered the Park Service’s contribution. Selective outrage.

CECILIA VEGA: Now, to the growing controversy over President Trump's Fourth of July plans. The bands have been rehearsing in front of the Lincoln Memorial, and those armored vehicles have now been moved into place. The President is calling it “the show of a lifetime”, but tonight, new word on just how much this show could cost American taxpayers. Here's ABC's Stephanie Ramos.

The Bradley fighting vehicles each weighing 30 tons have just been loaded onto these trailers. Crews preparing to move them closer to the Lincoln memorial, where heavy duty crane mats have been laid down to protect the streets.

They're just part of the grand military spectacle the President has ordered up.

PRESIDENT DONALD TRUMP: We're going to have planes going overhead. The best fighter jets in the world and other planes, too.

RAMOS: Some military planes flying in from as far away as California. The acting Secretary of Defense on-hand and the Chairman of the Joint Chiefs of Staff.

SEN. KAMALA HARRIS: I don't think he understands this is America's birthday, not his birthday.

RAMOS: The event is free, but the White House has given VIP tickets to the Republican National Committee and top donors. On the mall today, I met Randall Thom, a Trump supporter who traveled here from Minnesota and asked him about concerns that tomorrow's event could turn into a campaign rally.

What do you think about that?

RANDALL THOM: I think it's going to be wonderful because our President, he puts America first. [Transition] We're coming together. We're getting our country being respected.

RAMOS: But tonight, there are new questions about the cost of this extravaganza. The National Parks Service is reportedly diverting $2.5 million from improvement projects. The Pentagon hasn't put a number on its contribution. And the administration won't give us a price tag. But today, the President tweeting, "The cost of our great salute to America tomorrow will be very little compared to what it's worth."

VEGA: And Stephanie Ramos joins us from the National Mall. Stephanie, President Trump says the fireworks for tomorrow's festivities will be donated, be you now there are new questions about that tonight?

RAMOS: There are, Cecilia. The owner of that Ohio company that donated the fireworks, he had asked the President to hold off on new tariffs on Chinese products, including fireworks. The President later announced he would do that, but on that same day, the administration revealed the donation of the fireworks for the Fourth of July. Cecilia?

DAVID BEGNAUD: Well, the President is promising “the show of a lifetime” tomorrow in Washington. Tonight, as we speak the military hardware is being put into place. Stages and stands are being prepared and our chief Washington correspondent, Major Garrett, is at the Lincoln Memorial tonight. Major?

MAJOR GARRETT: Good evening, David. Welcome to a hot and humid steps of the Lincoln Memorial. Over my shoulder, you see the army band formally known as Pershing’s Own, part of the pageantry here. They're working through their rehearsals. To my left, you see one of two Bradley infantry vehicles, part of the militarized pageantry.

You know, when the President talked about the show, that's the important word, because this is his show, stage managed for weeks by the White House. Of the cost, and there will be many, the President said, well, it will be very little compared to what this is all worth. We have one figure worth noting, reportedly the National Park Service will have to use $2.5 million in user fees from other national parks to help defray some of the costs here. David.

BEGNAUD: Major, we know the President will be there. Who else is going to be with him?

GARRETT: Well, let me give you some visuals on that. My photographer Tony Furlough will show you the one bleacher wrapped in bunting. That is for VIPs. Who are the VIPs? That will be for the White House to decide. Some of those VIPs will be Republican Party donors, creating a bit of partnership, muddying what is historically a non-partisan event.

As for all other matters here, the District government wants to be repaid for any additional costs. The biggest thing here to think about, David, and one of the biggest challenges, for everyone-- the President and everyone involved in this, the weather forecast for this Fourth of July here, 80 percent chance of thunderstorms and possibly lightning. If that lightning occurs, David, there will not be any of the planned [mic cuts out]

BEGNAUD: Ah, there you go. Major Garrett proving he can walk, talk, and give context. Thank you, Major.