Nets Give One Minute to Obama Counsel Indictment, Gave Manafort’s 60 Percent of Airtime 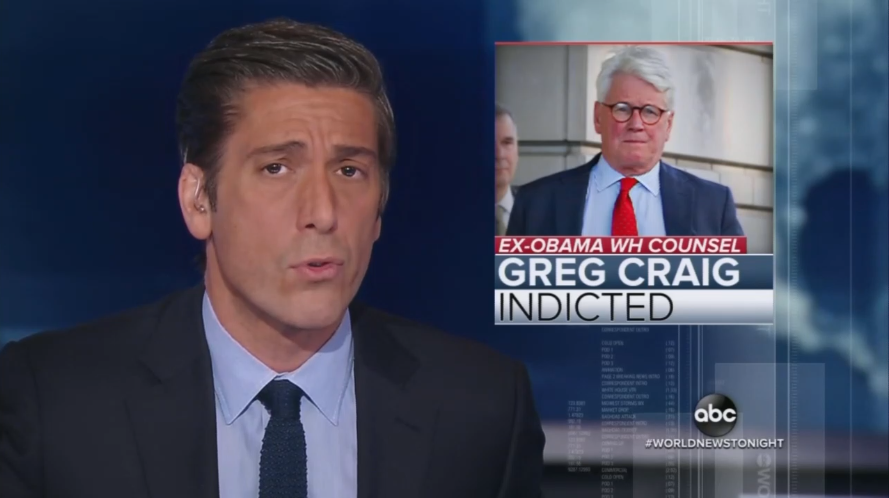 One more indictment that originated from the Trump-Russia probe came tumbling down the pike on Thursday, when a former White House counsel for President Obama was charged with lying to investigators about his foreign lobbying work for Ukraine. If that sounds familiar, it’s because that’s similar to what former Trump campaign head Paul Manafort was convicted of. But despite the similarities, the airtime dedicated to the indictment by the broadcast networks was grossly lopsided.

On Thursday, the combined evening airtime allowed by ABC, CBS, and NBC for the indictment of former White House lawyer Greg Craig was one minute and 15 seconds. Both ABC’s World News Tonight and CBS Evening News sprinted past the story with 16 and 17 seconds respectively. NBC Nightly News offered a little bit more time (42 seconds) but it was still under a minute.

With the collusion conspiracy on their minds, those same networks went into a feeding frenzy in late October 2017.

NewsBusters previously documented that following the indictments of Paul Manafort and deputy chair Rick Gates, the evening programs of ABC, CBS, and NBC dedicated 33 minutes and nine seconds on related news, while spending 22 minutes and 14 seconds on all other news for the day. Doing the math, that meant they spent 60 percent (59.86 percent) of their total airtime on news sparked by the indictments.

Spanish-language giants Univision and Telemundo also piled on, spending a combined 14 minutes and 54 seconds of their October 30, 2017 national evening newscasts on the Manafort and Gates indictments.

Fast-forwarding back to Thursday, it’s easy to see how most of the networks wanted to save face by at least touching on the Craig story.

“Tonight, a White House counsel from the Obama administration is now facing criminal charges that came out of the Mueller investigation,” announced ABC anchor David Muir. “A grand jury has now indicted Greg Craig for alleged violations of foreign lobbying laws for his work in Ukraine. Craig in private practice since 2010 denies the charges.” That was his entire news brief.

The coverage on CBS was fairly similar, but NBC White House correspondent Kristen Welker added a detail the others didn’t: “He's accused of lying to federal officials about legal work he did with Paul Manafort for the Ukrainian government. Now Manafort was sentenced to more than seven years in prison for lobbying violations and for financial crimes.” None of them mentioned how Craig was also on the team that defended former President Bill Clinton from impeachment.

But the disparity was still glaring.

DAVID MUIR: Tonight, a White House counsel from the Obama administration is now facing criminal charges that came out of the Mueller investigation. A grand jury has now indicted Greg Craig for alleged violations of foreign lobbying laws for his work in Ukraine. Craig in private practice since 2010 denies the charges.

JEFF GLOR: Former President Obama’s first White House counsel was indicted today in a case that grew out of the Mueller investigation. Greg Craig is charged with lying to the Justice Department about work he did in 2012 for Ukraine's Russian-backed government. A short time ago Craig said the prosecution is unjustified.

SAVANNAH GUTHRIE: Some breaking news tonight, a former top official in the Obama administration has been indicted as part of the Russia investigation. White House correspondent Kristen Welker joins us and Kristen, this is after Mueller already wrapped up his work.

KRISTEN WELKER: Savannah, that's right. Greg Craig former White House counsel to President Obama is the first prominent Democrat to be charged in the Russia investigation. He's accused of lying to federal officials about legal work he did with Paul Manafort for the Ukrainian government. Now Manafort was sentenced to more than seven years in prison for lobbying violations and for financial crimes. Tonight, Craig's legal team calling the charges misleading and saying it ignores evidence to the contrary, Savannah.

GUTHRIE: All right, Kristen Welker, at the White House.

ILIA CALDERÓN, ANCHOR, UNIVISION: Today they also accused Greg Craig, former legal counsel for the Barack Obama White House, of lying and hiding information in a federal investigation that grew out of the Russian scheme. Prosecutors in Washington filed two criminal charges against Craig for concealing from the Department of Justice material facts about his work for Ukraine. Craig represented Juan Miguel González in his successful claim for the child Elián González during the Bill Clinton administration.