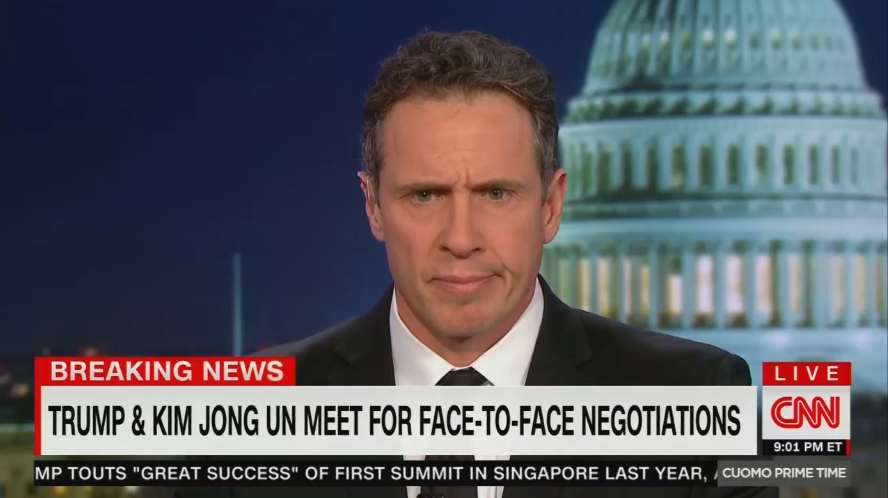 For all the liberal media’s prior pontifications about Wednesday being a “split screen” between two major events for President Trump, the congressional testimony of his former personal lawyer Michael Cohen and the denuclearization summit with North Korea, they were sure to only give the latter just a few pixels.

During the prime time and night hours on CNN and MSNBC (7:00 p.m. Eastern and 12 a.m. Eastern), the nine liberal hosts spent a combined 428 minutes and 19 seconds obsessing over the testimony of convicted liar Michael Cohen, and plotting how it could be used to bring down the Trump presidency. CNN’s share was 225 minutes and 10 seconds, while MSNBC sat at 203 minutes and nine seconds.

In stark contrast, these same cable networks spent a pitiful 12 minutes and 50 seconds combined discussing the unfolding and historic summit in Vietnam. CNN’s measly contribution was two minutes, 14 seconds. MSNBC’s was 10 minutes, 36 seconds with over half of that (five minutes, 54 seconds) having come during Hardball as Steve Kornacki again provided a refreshing break from Chris Matthews.

Now, to be fair, host Erin Burnett did cut to speak with White House correspondent Kaitlan Collins, who was in Vietnam following the President. But, for one minute and 30 seconds, they were discussing how the Cohen testimony was distracting from the trip.

Something similar happened during Anderson Cooper 360 (8:00 p.m. Eastern hour) when chief White House correspondent Jim Acosta made an appearance from Vietnam. But he managed to squeeze in a 15-second blurb on the summit (out of 37 seconds for the show):

Humorously, on CNN’s Prime Time (9:00 p.m. Eastern hour), host Chris Cuomo tried to do a news brief on the summit (48 seconds) but was hamstrung by the booth playing the wrong clip. He declared “[w]e're going to have to get the tape right and you'll hear what the President said … So, when I get that, I'll bring it to you. ”, but he never came back to the topic. The second hour of CNN Tonight brushed over the summit with 49 seconds prior to a commercial break.

Over on MSNBC, Hardball, The Rachel Maddow Show, and The 11th Hour spent at least one minute on the Hanoi summit and provided the three single largest totals for the entire evening between CNN and MSNBC. In turn, All In (18 seconds) and The Last Word (seven seconds) rendered the summit all but irrelevant with only passing mentions totaling a few sentences combined.

Speaking of The Last Word, host Lawrence O’Donnell provided a perfect quote to illustrate just how unhealthy his obsession with the Cohen hearing was and nothing else:

The smoking gun check, the one with Donald Trump’s bold signature, will now take its place in popular culture. You will be seeing it in tweets forever. You will be seeing it on t-shirts. It will be imprinted on toilet paper, on coffee mugs and it will take its place in history as the most important check Donald Trump has ever written because it is the check that could end his presidency.

Yikes. In terms of being out of control, it harkened back to his February 3, 2015 commentary about how fantastical Barack Obama’s Dreams from My Father was.

To praise, then criticize, Lyin’ Brian Williams, he found 16 seconds in his newscast to allude to the increasingly-terrifying military escalation over the past few days between India and Pakistan in light of the President being a few countries away in Vietnam. But like most liberal journalists, any praise they might incur is quickly erased by their, well, liberal bias. Here was Williams mocking Fox News:

I watched some Fox News here in the States tonight. Wrote down two of the headlines on screen. Number one: “Trump talks peace abroad while Democrats focus on Cohen saga.” Number two, “Democrats’ war on the American dream.” They're giving heavy air cover to the Trump forces here in the States.