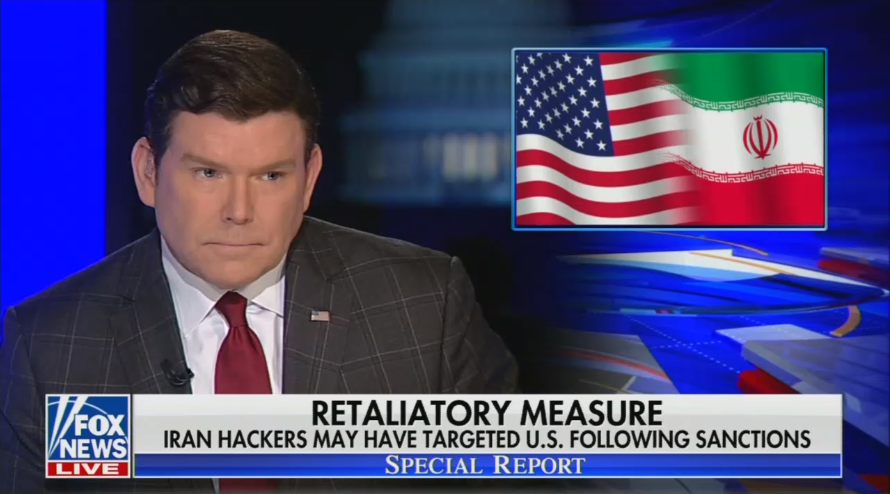 In an exclusive report out Thursday, the Associated Press detailed attempts by the Iran-backed group Charming Kitten to hack the personal e-mail accounts of dozens of U.S. officials and citizens in retaliation for President Trump’s pull out of the nuclear deal. And as has become their custom, the liberal broadcast networks (ABC, CBS, and NBC) buried their heads in the sand and ignored the news of dirty deeds by Iran.

Instead of covering the hackings, which happened just last month, ABC and CBS spent their time laughing about money falling out of a Brinks truck while NBC hyped a challenge by Vitamin Water to go a year without a smartphone for $100,000.

Where the Iran-friendly networks failed, Fox News Channel’s Special Report took up the mantel. “As President Trump moved to end the nuclear deal and re-impose sanctions, hackers said to have ties to Iran allegedly trying to break into the personal emails of American officials responsible for enforcing those sanctions,” correspondent Ellison Barber reported.

Barber noted that “experts say this recent hacking attempt could be an escalation of a long-standing problem.” That’s because according to the AP, the “hacker’s hit list” included “high-profile defenders, detractors and enforcers of the nuclear deal struck between Washington and Tehran, as well as Arab atomic scientists, Iranian civil society figures and D.C. think tank employees.” That included over a dozen U.S. Treasury officials.

One of the targets, Stanford University lecturer Andrew Grotto who used served on the National Security Council under President Obama and President Trump, spoke with Barber and told her that Charming Kitten was “known for being a little sloppy and a little loud.”

Effectively proving the amateurish nature of the group, the AP reported:

The hit list surfaced after Charming Kitten mistakenly left one of its servers open to the internet last month. Researchers at [‘London-based’ cybersecurity firm] Certfa found the server and extracted a list of 77 Gmail and Yahoo addresses targeted by the hackers that they handed to the AP for further analysis.

“Although those addresses likely represent only a fraction of the hackers’ overall effort,” the AP noted. “[A]nd it’s not clear how many of the accounts were successfully compromised — they still provide considerable insight into Tehran’s espionage priorities.”

This dead silence wasn’t the first time the networks covered for the tyrannical Iranian regime. In May of this year, ABC suggested Israel and the U.S. were the ones destabilizing the Middle East, not the terrorist-backing Iranians. In September 2017, NBC sat down with Iranian President Hassan Rouhani and sympathized with him against Trump. The networks also downplayed the regime killing anti-government protesters at the end of 2017.

Even though the brutality of the Iranian government was well known, CBS often sided with them and blamed the U.S. for their plight. CBS foreign correspondent Elizabeth Palmer stated that Iranians felt like “hostages” to a “hostile White House" and spat at the U.S. for being “belligerent” and “bullying” them.

BRET BAIER: There are new concerns about Iran's efforts to get personal information about top American officials in retaliation for increased sanctions on that country. Correspondent Ellison Barber tells us what we’re learning tonight.

ELLISON BARBER: As President Trump moved to end the nuclear deal and re-impose sanctions, hackers said to have ties to Iran allegedly trying to break into the personal emails of American officials responsible for enforcing those sanctions. That according to an exclusive report by the Associated Press. The U.S. government is focused on Iran and cyber activity for decades, but experts say this recent hacking attempt could be an escalation of a long-standing problem.

ANDREW GROTTO (Stanford University): It is hard to put this in context without knowing what their and motivation is. Is it espionage? Which, you know, they have a long history of doing. Or, is it in this second category of using cyber – destructive attacks?

BARBER: Andrew Grotto’s email was reportedly one of the targets, he worked as the senior director for cyber security policy under both President Obama and President Trump. The hackers are said to be part of the group known as Charming Kitten.

GROTTO: They’re known for being a little sloppy and a little loud.

BARBER: One of the group’s hit list reportedly became public after the hackers accidentally left a server open to the internet. A London-based cyber security firm extracted a list of 77 addresses and turned them over to the AP.

The AP says the list includes private accounts of “high-profile defenders, detractors, and enforcers of the nuclear deal struck between Washington and Tehran”. And more than a dozen U.S. Treasury officials.