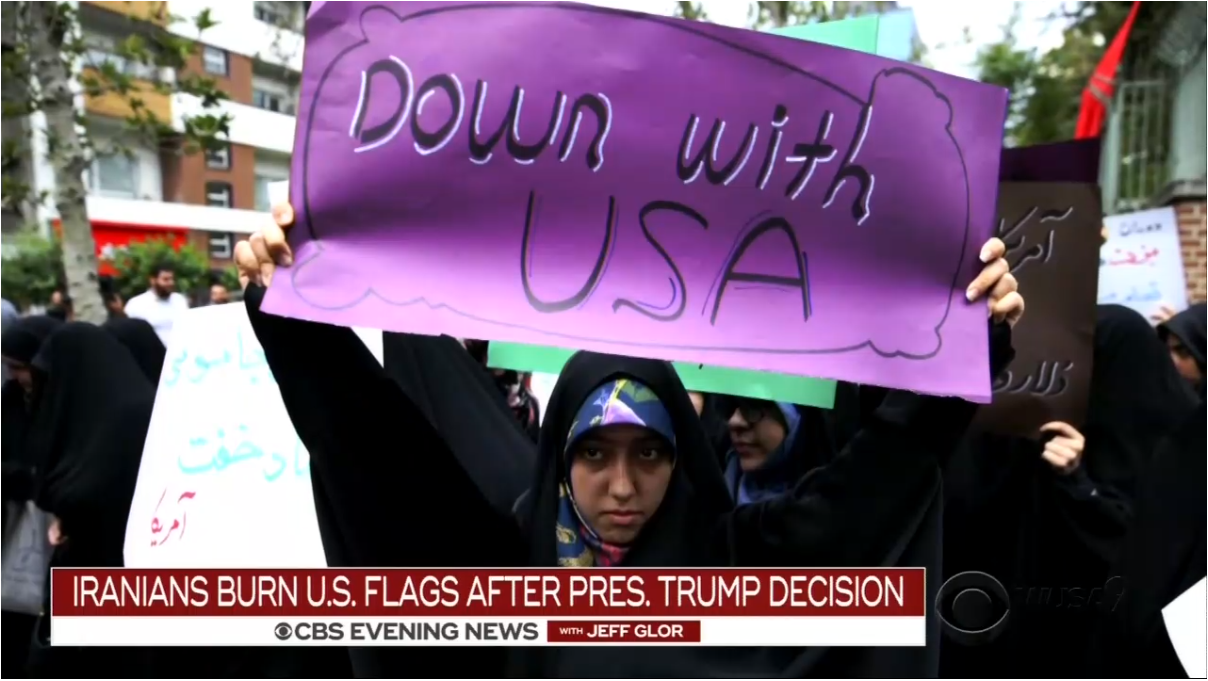 The same day the Trump administration was able to secure the release of three American hostages from North Korea in the run-up to the historic summit, CBS foreign correspondent Elizabeth Palmer was in the Iranian capital claiming the people felt like hostages of the same Trump administration. At the same time, she failed to mention Iran was actually holding several Americans captive.

After CBS Evening News led their Wednesday broadcast with the news of the North Korean hostages being released and further analysis of the negotiations, the third segment belonged to Palmer's report on the Iranian people’s reaction to the U.S. pulling out of the Iran nuclear deal.

“The hardliners didn't waste any time. By late afternoon they’d arranged a noisy demonstration,” she began her report. She was in the middle of a crowd protesting outside the old American embassy in Tehran as they chanted “death to America” and burned the American flag. They also wanted to restart the nuclear program. “But from a distance, you can see this is a pretty small group staging what's really a media circus,” she admitted.

She then pivoted to the “ordinary” Iranians and how they were being hurt by the United States’ latest move, despite the fact the nuclear agreement wasn’t helping them either. Speaking to one man, Palmer described how the people were worried about facing greater hardships because of the U.S. withdrawal from the deal:

He told us what millions of ordinary Iranians are saying, that the nuclear deal hasn't yet, as promised, improved their lives, and now that President Trump has pulled out, they're facing even more hardships under renewed sanctions.

The man told her, “I haven’t good job. I am very worried about my future and my family” and “I think it's very harder than today.” And when the broadcast returned to live, Palmer chided the Iranian government and the Trump administration for holding the people hostage. “The fact is Iranians feel like hostages, not only to their own corrupt, repressive government, but also to an inexplicably hostile White House,” she declared.

It’s perplexing how Palmer could seriously claim the White House’s position on Iran was “inexplicable” considering their support for terrorism and the fact they’re actually holding at least five Americans hostage. It could also be because the Iranian Navy routinely harasses our Navy vessels as they pass through the Strait of Hormuz:

As routinely as the Iranian navy plays dangerous games with U.S. vessels, the liberal networks omit it from their coverage. On numerous occasions, the Media Research Center has documented how the networks ignore Iran’s radical actions since the signing of the nuclear deal.

It’s disappointing that Palmer chose to suggest the United States was the one holding Iranians hostage than their government was the hostile regime threatening the lives of innocent people. But then again, she is one of the few Western journalists allowed into the oppressive country, so she may have to stay in their good graces to keep that benefit.

JEFF GLOR: In Iran, demonstrators took to the streets of the capital to protest the American withdrawal from the nuclear deal today. And Elizabeth Palmer is in Tehran.

We're in front of the old American embassy right now. A crowd has gathered. This is all highly organized. They started shouting, "Death to America," and any moment they’re going to set fire to the American flag.

These students are cheerleaders for Iran's Revolutionary Guards, who don't want Iran opening up to the world. They never liked the nuclear agreement or JCPOA that shut down Iran's nuclear program, and, in fact, they'd like to see it up and running again. But from a distance, you can see this is a pretty small group staging what's really a media circus. As we spoke to the students, an older man came up to tell us he wasn't part of it.

UNIDENTIFIED MAN: What they do, I am not agree with them.

PALMER: He told us what millions of ordinary Iranians are saying, that the nuclear deal hasn't yet, as promised, improved their lives, and now that President Trump has pulled out, they're facing even more hardships under renewed sanctions.

UNIDENTIFIED MAN: I haven’t good job. I am very worried about my future and my family.

PALMER: Are you prepared for hard times?

UNIDENTIFIED MAN: I think it's very harder than today.

PALMER: And then clearly concerned about regime spies eavesdropping on him, he added,

UNIDENTIFIED MAN: And I’ve got fear when I'm talking with you in this country.

PALMER: The fact is Iranians feel like hostages, not only to their own corrupt, repressive government, but also to an inexplicably hostile White House. Jeff?