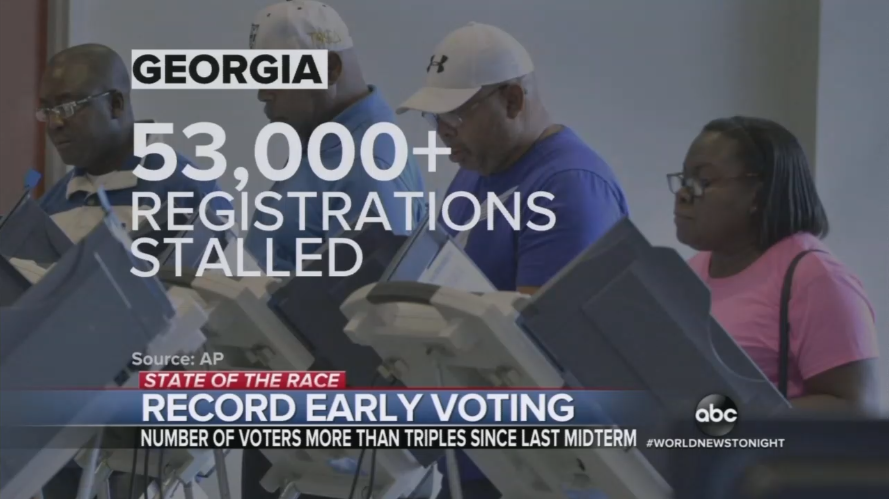 This week, Texas Secretary of State Rolando Pablos confirmed that state Attorney General Ken Paxton was looking into a case where the state Democratic Party allegedly sent out mailers to noncitizens requesting they register to vote with documents that had the citizenship box checked off. Instead of covering this case (which had been known about since late last week) both ABC News and CBS News pushed Democratic claims of voter suppression in Georgia by the GOP.

According to a Washington Times report published October 18, “The Texas Democratic Party asked non-citizens to register to vote, sending out applications to immigrants with the box citizenship already checked ‘Yes,’ according to new complaints filed Thursday asking prosecutors to see what laws may have been broken.”

Between October 18 and October 23, not a single liberal broadcast network (ABC, CBS, and NBC) covered the accusation. Yet, both ABC and CBS ran reports suggesting the Georgia Republican Party was trying the suppress the African-American turnout for the gubernatorial election.

On Tuesday, October 23, it was ABC’s turn to mislead their viewers about what was going on in Georgia. “And in Georgia tonight, where there are many long lines, the Republican candidate, the Secretary of State Brian Kemp, is facing accusations of trying to suppress the vote,” announced sensations anchor David Muir during World News Tonight.

ABC reporter Steve Osunsami seemed as though he was out to warp all the facts during his report. Given the historical fact that Democrats usually outpaced Republicans in early voting, it’s considered a weak spot in their get out the vote efforts. But according to ABC, Kemp’s concern about it had a more sinister motive.

“Republican Brian Kemp is on tape saying that the high early voting concerns him,” Osunsami said with a worried tone. “They have just an unprecedented number of that, which is something that continues to concern us, especially if everybody uses and exercises their right to vote,” Kemp could be heard saying in the soundbite.

Kemp had been Georgia’s secretary of state for years and Osunsami seemed offended that the law required a voter’s documentation to be accurate. “Kemp is already accused of stalling 53,000 voter registrations, most of them black voters, because of mismatched addresses, names spelled incorrectly, or using Jon instead of Jonathan,” he huffed. 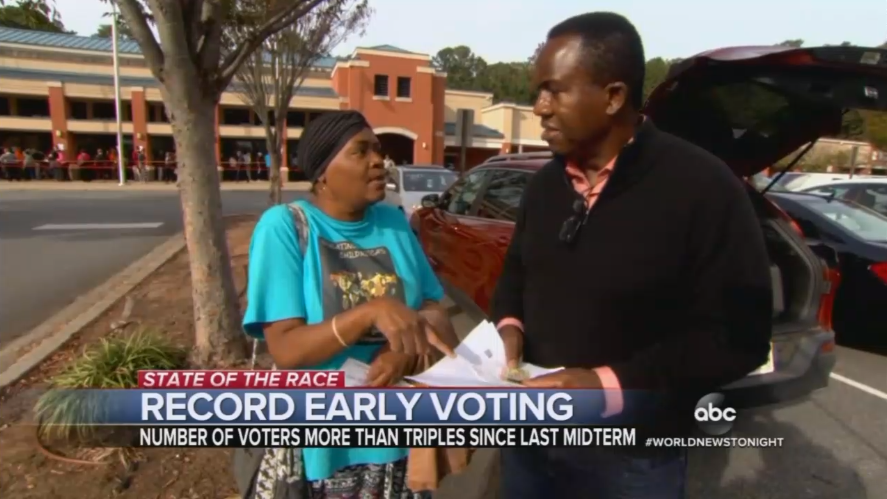 After speaking with one voter he claimed was turned away from early voting, the ABC reporter couldn’t understand why her wrong address could keep her out.

“She showed us her license and voter registration, which match, but the state's records show a different address and her vote was refused,” he said. Well Steve, maybe it’s because, without the right address, the polling staff couldn’t confirm she was voting in the right place at all.

But Osunsami made it sound like Kemp himself kicked her out of the polling place, saying “Brian Kemp says he's just following the law.”

There were also a few things wrong with Osunsami’s shots at Kemp, particularly those 53,000 pending registrations. According to reporting by the local Atlanta Journal-Constitution, those people could cast a ballot if they show a government photo ID that substantially matches the registration application.”

And if they didn’t have one of the six forms of acceptable ID (“a state driver’s license, a state or federal ID card, a valid employee ID from any government agency, a U.S. passport, a U.S. military ID or a tribal photo ID”), they can still fill out a provisional ballot.

But according to an interview Kemp did with The Resurgent’s Erick Erickson, those registrations were held up for many different reasons. Over 9,000 were people who were too young to vote. Almost 3,000 used fake addresses. “[C]itizenship could not be verified” for over another 3,000 and almost 6,000 “match another active voter file”. After those are removed “75% are on the list because they failed Social Security Number verification, a process put in place under the Obama Administration.”

DAVID MUIR: And in Georgia tonight, where there are many long lines, the Republican candidate, the Secretary of State Brian Kemp, is facing accusations of trying to suppress the vote. The Democratic candidate, Stacey Abrams, if she wins, she would be the first black female governor in the country. ABC's Steve Osunsami in Georgia, he's with our teams out across the country with the state of the race.

STEVE OSUNSAMI: Democrat Stacey Abrams will become the first black woman governor in America if she wins; a big reason for the high turnout. Tonight, Rolling Stone has released audio of the man she's running against. Republican Brian Kemp is on tape saying that the high early voting concerns him.

BRIAN KEMP: They have just an unprecedented number of that, which is something that continues to concern us, especially if everybody uses and exercises their right to vote.

OSUNSAMI: The problem is that Kemp is also the current secretary of state, who supervises elections.

UNIDENTIFIED MAN: I think it's a conflict of interest. I don't think he should be in position to make any decisions relating to election at all.

OSUNSAMI: Kemp is already accused of stalling 53,000 voter registrations, most of them black voters, because of mismatched addresses, names spelled incorrectly, or using Jon instead of Jonathan. Sabina Moore says it's happening to her.

OSUNSAMI: She showed us her license and voter registration, which match, but the state's records show a different address and her vote was refused. Brian Kemp says he's just following the law.