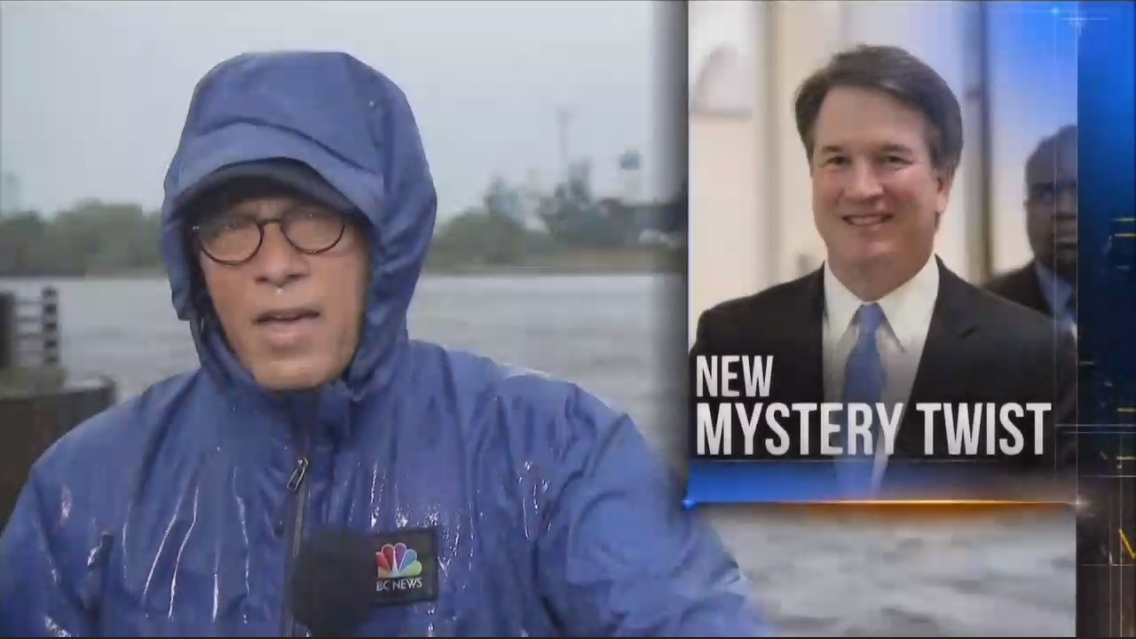 In a last-ditch effort to sink the Supreme Court nomination of Judge Brett Kavanaugh, Democratic Senator Dianne Feinstein (CA) sent a letter to the FBI asking them to investigate the candidate for an undisclosed reason. All Feinstein revealed to the public was that she received “new” information from a source she wouldn’t name. Apparently, NBC was the only broadcast network to not apply ‘the smell test’ since they were the only ones to run with it.

In the midst of their Hurricane Florence coverage, NBC Nightly News anchor Lester Holt was eager to get to the dubious story. “Now to the secret information one top Democratic Senator claims to have about Supreme Court nominee Brett Kavanaugh,” he announced with the only criticism being Republicans calling it a “delay tactic”.

The report was handled by White House correspondent Peter Alexander, who hyped “the mysterious new twist.” “Feinstein revealing little, saying she has, quote, ‘received information from an individual’ concerning Kavanaugh. That individual, Feinstein says, ‘strongly requested confidentiality, declined to come forward or press the matter further and I've honored that decision,’” he reported.

Alexander touted how Feinstein referred the “secret” information she received to the FBI and how they added it to Kavanaugh’s background file for the White House. But he failed to mention that the FBI had declined to investigate the nominee after looking at the information Feinstein provided.

According to Washington Post reporter Matt Zapotosky, who spoke to an FBI official about the matter: “Importantly, the FBI isn't doing a criminal investigation based on what Feinstein told them. The broad outline of the allegation, as I understand it, seems like it'd be in state/local authorities wheelhouse, if there even is a crime, and if the statute of limitations hasn't run.”

The Guardian newspaper managed to get a hold of a source that was briefed on the contents of the letter Feinstein sent to the FBI and it didn’t seem that serious:

A source who said they were briefed on the contents of the letter said it described an incident involving Kavanaugh and a woman that took place when both were 17 years old and at a party. According to the source, Kavanaugh and a male friend had locked her in a room against her will, making her feel threatened, but she was able to get out of the room. The Guardian has not verified the apparent claims in the letter. It is not yet clear who wrote it.

It seemed like Feinstein and NBC were trying to smear a 53-year-old Kavanaugh with a case of possible bullying from when he was 17. Feinstein requested an investigation into Kavanaugh over this but was fine with Bill Clinton as president.

NBC also didn’t seem to think that Feinstein’s timing was suspicious and portrayed it as something only Senate Republicans and the White House were complaining about.

But according to Fox News, Feinstein had been holding onto the letter for months. “That's according to a source familiar saying she had this. She’s met with [Kavanaugh] since then on August 20th. Also had an opportunity in those open hearings and closed hearings to ask him about it. And now springs this to the FBI last night,” reported chief congressional correspondent Mike Emanuel during Special Report.

NBC ran with a last-ditch effort to trip up a Supreme Court nomination based on secret claims by a secret accuser. That’s not news, that’s rumors. That’s not journalism.

JUDGE BRETT KAVANAUGH: The court in Heller-- and the Supreme Court upheld --

SEN. DIANNE FEINSTEIN: I don’t-- Let me interrupt you because--

ALEXANDER: Feinstein's move comes after Democrats attacked Kavanaugh in contentious hearings and just one week before the Senate Judiciary Committee is scheduled to vote on his nomination. The White House questioning Feinstein's timing: “Not until the eve of his confirmation has Senator Feinstein or anyone raised the specter of new information about him,” blasting it as an “11th-hour attempt to delay Kavanaugh's confirmation.”