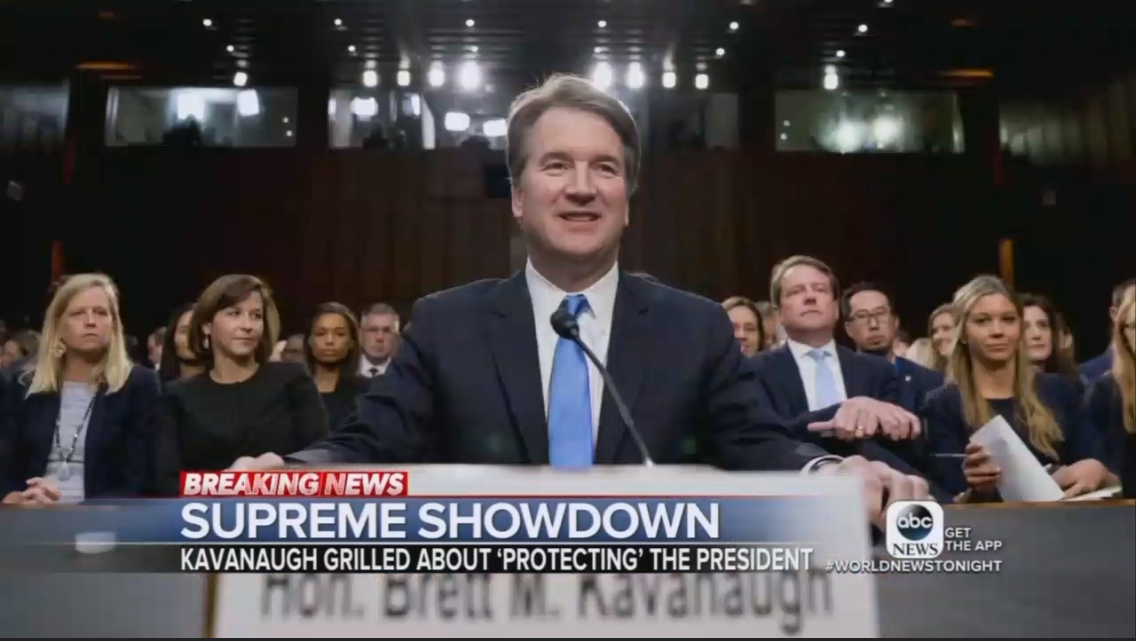 Wednesday’s 12-hour Senate confirmation hearing for Supreme Court nominee Brett Kavanaugh brought with it some substantive discussions for once. Senators peppered the candidate with hypothetical questions about how he would rule in certain situations. Kavanaugh being a studied judicial mind, he avoided giving his opinion because that was how Democrats sunk the nomination of Robert Bork. But ABC correspondent Terry Moran was not having any of it and acted like it wasn’t normal.

Moran was no rookie, because as anchor David Muir noted on World News Tonight, “Terry Moran has covered the court for years for us”. But despite that expertise, Moran never mentioned that it was standard practice for nominees to avoid answering hypotheticals. Don’t just take my word for it, CBS legal correspondent Jan Crawford noted it on Evening News:

JAN CRAWFORD: Throughout the day, Kavanaugh fielded questions on the major issues, from abortion rights to presidential pardons. But taking a page from the playbook of past nominees he refused to speculate on how he would rule in future cases.

But that fact didn’t stop Moran from huffing about Kavanaugh’s adherence to precedent.

He reported how “Democrats weren't satisfied” with his testimony to be independent from the President. “And they drilled down,” Moran touted. “What if the President himself is subpoenaed to testify? Kavanaugh ducked,” he declared.

“Another issue, guns. And Kavanaugh's strong pro-second amendment views. Senator Dianne Feinstein asking about Kavanaugh's ruling striking down Washington, D.C.’s assault weapons ban. Again, the nominee ducked,” he lamented farther. “On abortion, another evasion when he was asked whether Roe V Wade could be overruled if he is confirmed.”

Moran’s misleading report was made all the more ironic when Muir requested that he “keep us honest here” while wrapping up the segment.

As proof of a blatant double standard from Moran, one only needed to look back at what he was saying about then-Supreme Court nominee Elena Kagan. The Media Research Center’s Rich Noyes transcribed some pretty flowery praise for the candidate:

TERRY MORAN: Well, Diane, the two factors that really went into this nomination — Elena Kagan’s confirmability, the White House does think that, despite what Jon is saying, she is strong, she’s got support of conservatives in and out of Washington, and she’ll make it. And, likeability — one of the things she’s demonstrated at the institutions that she’s been at, at Harvard Law School, in the Clinton administration, at the Solicitor General’s office, is an openness to people of different views, as President Obama said.

Moran also highlighted a high school photo of Justice Kagan where she wore a robe and held a gavel. “Even in high school, check out her yearbook photo here, she had her sights set on the high court,” he gushed.

But on Wednesday, Moran concluded with a huff about how “Republicans have this thing on rails and right now, they've got the votes.”

DAVID MUIR: And across town on Capitol Hill tonight, Supreme Court nominee Brett Kavanaugh and the heated confirmation hearing today. Questioned directly for the first time at his hearing. Judge Kavanaugh was asked, does a president have to comply with a subpoena? And can a president pardon themselves? How he answered. It made immediate headlines today. And he was also pressed on guns and on a woman's right to choose. Terry Moran has covered the court for years for us, and he was in the room today.

MORAN: Despite the occasional outbursts, this hearing finally got down to issues. And the dominant issue today, the shadow looming over Kavanaugh for many Democrats, whether President Trump picked him so he would to rule in the President's favor in any cases stemming from special counsel Robert Mueller's investigation. Kavanaugh offered a personal declaration of Independence.

BRETT KAVANAUGH: No one is above the law in our constitutional system.

MORAN: Democrats weren't satisfied. And they drilled down. What if the President himself is subpoenaed to testify? Kavanaugh ducked.

DIANNE FEINSTEIN: Can a sitting president be required to respond to a subpoena?

KAVANAUGH: I can't give you an answer on that hypothetical question.

PATRICK LEAHY: President Trump claims he has an absolute right to pardon himself. Does he?

KAVANAUGH: That's a hypothetical question that I can't begin to answer in this context as a sitting judge and as a nominee to the Supreme Court.

FEINSTEIN: How do you reconcile what you just said with the hundreds of school shootings using assault weapons that have taken place in recent history?

KAVANAUGH: Handguns and semi-automatic rifles are weapons used for hunting and self-defense. But as you say, Senator, you rightly say, they're used in a lot of violent crime and cause a lot of deaths. That's what makes this issue difficult.

MORAN: On abortion, another evasion when he was asked whether Roe V Wade could be overruled if he is confirmed.

KAVANAUGH: I understand the importance that people attach to the Roe V Wade decision, to the Planned Parenthood V Casey decision. I don't live in a bubble. I understand -- I live in the real world.

MUIR: Keep us honest here, Terry. How long are these hearings expected to last, and when are we actually going to see a vote here?

MORAN: David, the hearings will last through the end of the week. The committee will vote on Kavanaugh of September 20th and the full Senate by the end of the month. The Republicans have this thing on rails and right now, they've got the votes.