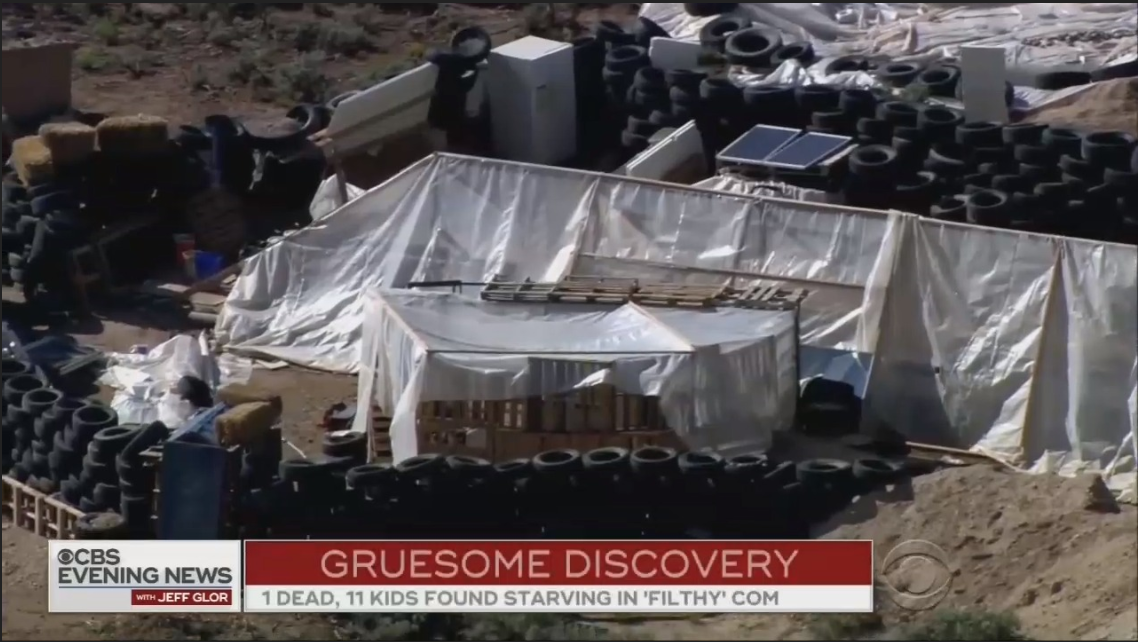 As we continue to get updates on more gruesome discoveries and the squalid living conditions at a New Mexico compound that included 11 starving children (ages one to 15) and the dead body of one child, one key detail had gone totally unreported by the major broadcast networks (ABC, CBS, and NBC): The ties to radical Islam.

Last Friday, the Taos County Sheriff’s Office executed a raid on a makeshift compound in the New Mexico desert in the search for 4-year-old Abdul-Ghani, who was believed to have been abducted by his father 39-year-old Siraj Wahhaj in Georgia back in December. And according to the Sheriff’s Office, what they found was horrific, even "third world":

“The only food We[sic] saw were a few potatoes and a box of rice in the filthy trailer,” said [Sheriff Jerry] Hogrefe. “But what was most surprising, and heartbreaking was when the team located a total of five adults and 11 children that looked like third world country refugees not only with no food or fresh water, but with no shoes, personal hygiene and basically dirty rags for clothing.”

The raid was a high stakes operation that required “a tactical approach for our own safety because we had learned the occupants were most likely heavily armed and considered extremist[s] of the Muslim belief,” Sheriff Hogrefe explained in a press release. Two men were arrested while three women who were also in the compound were detained and then released. “[A]ll 11 children were immediately taken in protective custody and later turned over to the state CYFD division,” the Sheriff’s Office said.

The missing child was not found. A child’s body was discovered on the property but had yet to be identified by authorities.

According to a warrant released on Monday, and reported by Fox News, “Wahhaj told the boy’s mother he wanted to perform an ‘exorcism’ on his then-3-year-old son because he believed he was ‘possessed by the Devil.’ The boy suffered from seizures and couldn’t walk…”

If the case couldn’t get any grimmer, the New York Post discovered that Wahhaj’s father (who shares the same name) was named “as an unindicted co-conspirator in the 1993 World Trade Center bombing. He also was a character witness in the trial of convicted terror plotter Sheik Omar Abdel Rahman.”

When Wahhaj was taken down by authorities, he was armed to the teeth, according to the Sheriff’s Office:

The “all day” operation went without major incident or any injuries, but when encountered both men initially refused to follow verbal direction and Wahhaj who was held up inside the compound was heavily armed with an AR15 rifle, five loaded 30 round magazines, and four loaded pistols, including one in his pocket when he was taken down. Many more rounds of ammo were found in the makeshift compound that consists of a small travel trailer buried in the ground covered by plastic with no water, plumbing, or electricity –

While all three networks dedicated time to the story over the last couple of day, none of them had mentioned the ties to radical Islam. It would be one thing to not report it if it was pure speculation, but since the Taos County Sheriff’s Office came out and declared them “extremist[s],” it was a key detail that needed to be included.

The transcript for the video is below, click "expand" to read:

JILLIAN MELE: Let’s get you caught up, starting his story we have been following. And we have an update. At least one of the men found inside the filthy New Mexico compound is expected in court today. He faces extradition to Georgia as investigators try to locate his missing son. That man is one of five adults believed to be Muslim extremists under arrest for child abuse. Police busting them after receiving a tip about the missing little boy. They did not find that little boy but they did discover 11 starving children living at the compound.