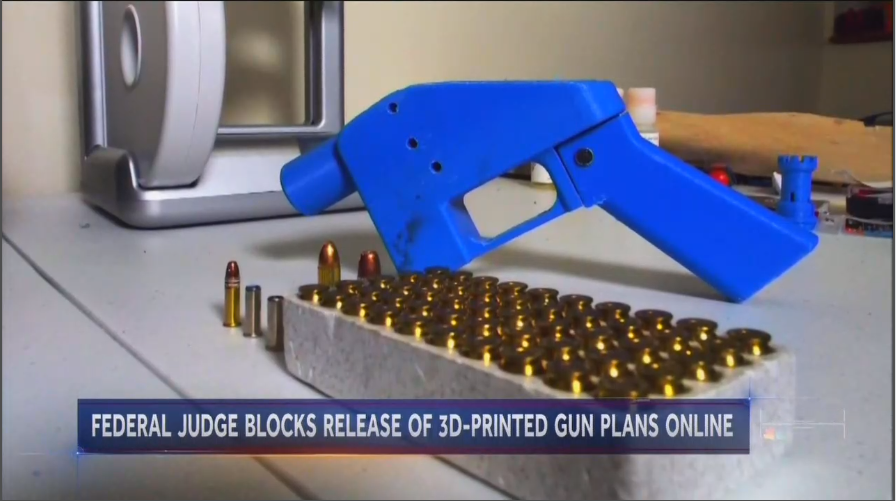 For days, the liberal media have been experiencing a Chernobyl-level meltdown about a Texas company releasing online instructions for 3D printing plastic weapons that actually fire real bullets. Of course, none of them did their homework and spewed inaccurate nonsense in an effort to stoke public fear of guns. After a liberal judge in Seattle blocked the release on Tuesday, the broadcast networks sang their praises with one network touting Democrats who said President Trump had blood on his hands.

“Let's turn now to a late development in the race to stop what some fear is the next gun threat: plastic weapons,” announced anchor Lester Holt during NBC Nightly News. “And tonight, a federal judge has just blocked a release of blueprints for the guns after several states took legal action to stop their release.”

The case in question involved gun rights advocate Cody Wilson and his company Defense Distributed. NBC reporter Tom Costello suggested it was the Trump administration that would allow 3D printed guns on the street “after the Obama administration sued to block [Wilson].” Bottom line, the blueprints to build firearms have been easily available online for years and Wilson’s case was about the international sale of firearms since the blueprints were online.

As National Review’s David French expertly noted on Tuesday, “The Obama administration justified its decision to prevent the plaintiffs from posting the files on the grounds that the files would be available for international download and international use.” He also noted that the Fifth Circuit Court’s ruling on the case found that printing firearms “is legal for United States citizens and will remain legal for United States citizens regardless of the outcome of this case.”

After scoffing at the idea that Wilson and gun rights activists had “First and Second Amendment protections,” Costello actually admitted that “various 3D instructions are online anyway.”

But those facts be damned by a liberal press that only worked to serve the Democrats. “Now, an 11th-hour legal battle. Eight states and the District of Columbia suing. And on Capitol Hill, Democrats holding the President personally responsible,” praised ABC senior White House correspondent Cecilia Vega on World News Tonight. She highlighted a clip of Connecticut Senator Richard Blumenthal (D) declaring: “The blood is going to be on [Trump’s] hands!”

Meanwhile, on the CBS Evening News, reporter Tony Dokoupil sat down with Wilson and assailed him with a question about how “when somebody downloads a gun from your website with your blueprints and kills somebody with it, how are you going to feel personally?” “If I allow you to download an AR-15, the full plans on the AR-15, I don't believe that I provide you anything other than the general knowledge of what an AR-15 is. I am no different from a publisher of information,” Wilson shot back.

Dokoupil was so ignorant about how easy and legal it was American citizens to make their own firearms, that he seemed aghast that Wilson had “personally moved beyond plastic to machine-grade metal, funding his legal fight by selling thousands of these-- a milling machine capable of making unmarked metal AR-15s and handguns-- A.K.A., ghost guns.”

The other bit of misinformation these liberal network peddled was the assertion that 3D printed firearms were “undetectable”. That is a lie. As Washington Free Beacon staff writer and resident liberal-gun-myth buster Stephen Gutowski noted on Twitter, “They all include metal and most designs simply make a single part out of 3D printed plastic.” (Gutowski previously worked for the Media Research Center.)

French also reminded readers that “The federal Undetectable Firearms Act makes it illegal to manufacture or possess a weapon undetectable by walk-through metal detectors.” Of course, there was no mention of this by any of the liberal networks.

But again, these facts did not stop the anti-gun networks from spreading their paranoid hysteria. “It’s a killer’s dream. It's a hitman's dream. It’s a terrorist’s dream. A hijacker's dream. Somebody who wants to hurt you can make their own gun,” shrieked NBC law enforcement analyst Jim Cavanaugh.

“This changes the safety of Americans forever if this is allowed to happen,” decried anti-gun Parkland father Fred Guttenberg on NBC. “Now, every American in the homeland is at risk. Terrorists, they want to home produce guns now in this land, they can.”

These stories were devoid of facts and reason. French said best as he began his article:

One of the most bizarre aspects of the modern gun debate is the extent to which it is still dominated by ignorance and misinformation. One of the most important controversies in American public life rages on, yet media gatekeepers and all too many politicians simply don’t know the most basic facts. They don’t understand the most basic constitutional issues. Even worse, many of them don’t seem to care.

DAVID MUIR: Next, the showdown over guns made of plastic. Guns made from 3D printers that work like regular guns, and the debate over whether the directions on how to make them should be posted online. The deadline for those directions was midnight tonight, and the Trump administration had cleared the way for those directions to be made public. But breaking developments, what a judge has now decided for now. Here's ABC's senior White House correspondent Cecilia Vega tonight.

CECILIA VEGA: Anyone with a 3D printer can make one. A homemade gun, untraceable in a crime, no background check required. The plastic, critics warn, easy to sneak past metal detectors. Detailed instructions, including for building parts of AR-15 style rifles were set to go online for anyone to access at midnight. Publishing them, a Texas group called Defense Distributed. On their website, the countdown. "The age of the downloadable gun formally begins."

VEGA: For years, the Obama administration fought the group in court. But the Trump administration recently backed down, clearing the way for the gun blueprints to be posted. Now, an 11th-hour legal battle. Eight states and the District of Columbia suing. And on Capitol Hill, Democrats holding the President personally responsible.

RICHARD BLUMENTHAL: The blood is going to be on his hands.

VEGA: And today, an about-face from the President himself, contradicting his own White House with this tweet, "I am looking into 3D plastic guns being sold to the public. Already spoke to NRA. Doesn't seem to make much sense!" But the last time the President went head-to-head with the NRA, in the wake of the parkland massacre, he caved on sweeping gun control changes. Tonight, the question, will this time be any different?

MUIR: Cecilia Vega with us from the White House tonight. And Cecilia, detailed instructions for making those guns, as I mentioned, were set to go online at midnight tonight, but now that judge has stepped in?

VEGA: Yeah David, a federal judge in Seattle has put a halt to the blueprints going up online. So, it seems the plan, at least as you said for now anyway, is on hold. Let me make it clear. This is not because of anything the President did. Asked to clarify that tweet today on those 3D guns, an aide said, we continue to look at all options while also supporting the First and Second amendment.

JEFF GLOR: Late today, a federal judge in Seattle blocked the uploading of any more blueprints for using 3D printers to make guns. And the founder of a pro-gun group agreed to stop posting any new blueprints online until September while a multistate lawsuit makes its way through the courts. As Tony Dokoupil explains tonight, it may be too late.

TONY DOKOUPIL: In the past three days, more than 2,500 people have downloaded Cody Wilson's blueprints for 3D-printed AR-15 assault-style rifles.

DOKOUPIL: At least eight states are waging a legal battle against Wilson to block access to the ten blueprints that detail how to make 3D printed firearms, from handguns to AR-15 style rifles, at home. The plastic weapons are untraceable, often undetectable, and deadly. When somebody downloads a gun from your website with your blueprints and kills somebody with it, how are you going to feel personally?

DOKOUPIL: The debate captured the attention of President Trump, who tweeted, "I am looking into 3D plastic guns being sold to the public. Doesn't seem to make much sense.” The federal government settled a lawsuit with Wilson's organization Defense Distributed allowing the company to publish its first batch of blueprints last Friday. The State Department tells CBS “the decision to settle the case was made in the interest of the security and foreign policy of the United States.”

There’s now a three-month backlog for milling machines like this one, which we found at Central Texas Gun Works just down the road from where Wilson makes them at his factory. Wilson's goal now is to keep publishing digital gun files until every gun on Earth is available to anyone online.

LESTER HOLT: Let's turn now to a late development in the race to stop what some fear is the next gun threat: plastic weapons. 3D knockoffs lethal, homemade, and hard to detect. The technology is accessible and so are the guns. And tonight, a federal judge has just blocked a release of blueprints for the guns after several states took legal action to stop their release. NBC’s Tom Costello has late details.

CHUCK SCHUMER: Make no mistake about it, this is the doing of the Trump administration. This is part of a long pattern pf letting the gun lobby get whatever they want.

COSTELLO: This morning, President Trump tweeted: “I am looking into 3D plastic guns being sold to the public. Already spoke to the NRA. Doesn't make much sense.” But it was the Trump administration that agreed Cody Wilson could post the instructions.

COSTELLO: After the Obama administration sued to block him.

FRED GUTTENBERG: This changes the safety of Americans forever if this is allowed to happen.

GUTTENBERG: Now, every American in the homeland is at risk. Terrorists, they want to home produce guns now in this land, they can.

JIM CAVANAUGH: It’s a killer’s dream. It's a hitman's dream. It’s a terrorist’s dream. A hijacker's dream. Somebody who wants to hurt you can make their own gun.