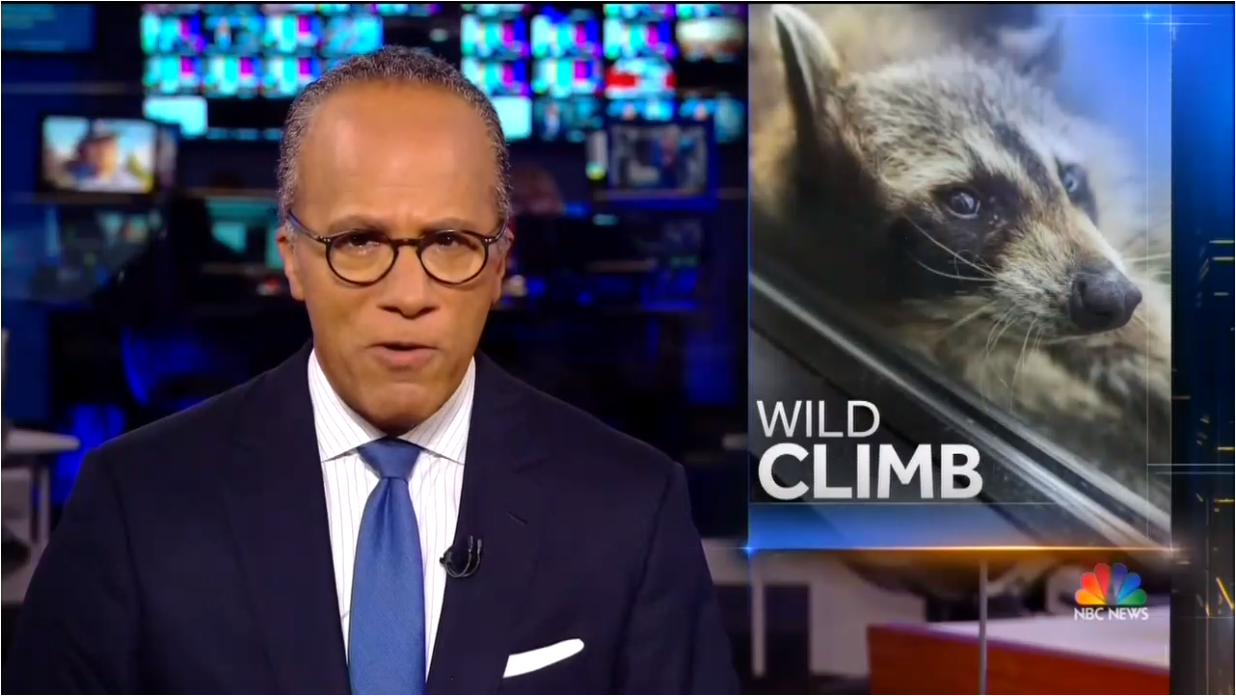 On Wednesday, CBS News was the only broadcast network of the big three (ABC, CBS, and NBC) to inform their viewers of an ambush on the U.S.-Mexico border that left a Border Patrol agent in critical condition. By their evening broadcast, CBS reported that the agent was upgraded to stable condition but their broadcast competitors ignored the shooting altogether. They instead chose to hype the social media phenomenon of a raccoon that scaled a building in Minnesota.

During CBS Evening News, the network didn’t touch the raccoon story at all and gave the Border Patrol agent shooting the serious coverage that it deserved (one minute and 49 seconds). “Now to a remarkable story of survival. A Border Patrol agent is in stable condition after being shot several times at close range he was on patrol, alone and on foot when he was attacked early yesterday,” announced John Dickerson, who was filling in for anchor Jeff Glor.

“In a desolate part of southern Arizona near the Mexican border, a lone agent investigating activity picked up by sensors was ambushed,” reported correspondent Mireya Villarreal. “The 21-year veteran is also a trained paramedic and treated his own gunshot wounds.” She also recalled FBI crime statistics that found “assaults on [Border Patrol] agents averages 428 per year”.

Villarreal wrapped up her report by noting that Border Patrol had apprehended several people near the where the shooting occurred but they weren’t suspects in the case. She also reiterated Dickerson’s earlier note that the agent was in stable condition.

CBS This Morning was the only morning newscast to even mention the shooting (22 seconds). Although, they did spend 47 seconds on the raccoon.

NBC Nightly News may not have found the time to mention the shooting of a Border Patrol agent but they did run a report on the Trump administration ripping apart families seeking asylum (two minutes and 15 seconds).

Of course, they chose to elevate the hyperbolic and incendiary language used by many on the left. “America is better than this inhuman, callous indifference and willful injury to children must stop,” shouted Washington State’s Democratic Governor, Jay Inslee, in a clip NBC shared.

NBC reporter Gadi Schwartz also highlighted “religious leaders” who wanted to target and deny Holy Communion to all Catholics who worked in border law enforcement. While he suggested there were multiple leaders pushing that policy, Schwartz only cited Tucson Arizona Bishop Edward Weisenberger. NBC also played a clip of Franklin Graham’s comments on the situation.

ABC and NBC couldn’t find the time to cover a Border Patrol agent who had to fight for his life but they needed to cover that raccoon.

JOHN DICKERSON: Now to a remarkable story of survival. A Border Patrol agent is in stable condition after being shot several times at close range he was on patrol, alone and on foot when he was attacked early yesterday. Mireya Villarreal picks up the story.

BORDER PATROL AGENT 1: We know the inherent dangers of this profession.

MIREYA VILLARREAL: In a desolate part of southern Arizona near the Mexican border, a lone agent investigating activity picked up by sensors was ambushed.

BORDER PATROL AGENT 1: The agent was attacked by an unknown number of assailants, one of whom fired several shots at the agent in close proximity.

VILLARREAL: The 21-year veteran is also a trained paramedic and treated his own gunshot wounds. Jim Chilton owns this land and says it's often used by the drug cartels.

VILLARREAL: The number of assaults on agents averages 428 per year, according to the FBI. But under a new reporting policy, Border Patrol says that number is dramatically higher. They multiply all the variables. So a 2017 incident in south Texas involving six suspects, seven agents, and three kinds of weapons was reported as 126 assaults. Despite reporting differences, agents who drove us along the Arizona border say the threat is real.

BORDER PATROL AGENT 2: These guys are also scouting our partners here at the customs office for vehicles.

VILLARREAL: Does it ever bother you guys?

BORDER PATROL AGENT 2: It's a little disconcerting, but you get used to it after a while.

VILLARREAL: Several suspects were picked up near the shooting scene and are being held on immigration violations but they have not been connected right now to the shooting of this agent. As we said earlier, the agent is in stable condition and is in good spirits, John.