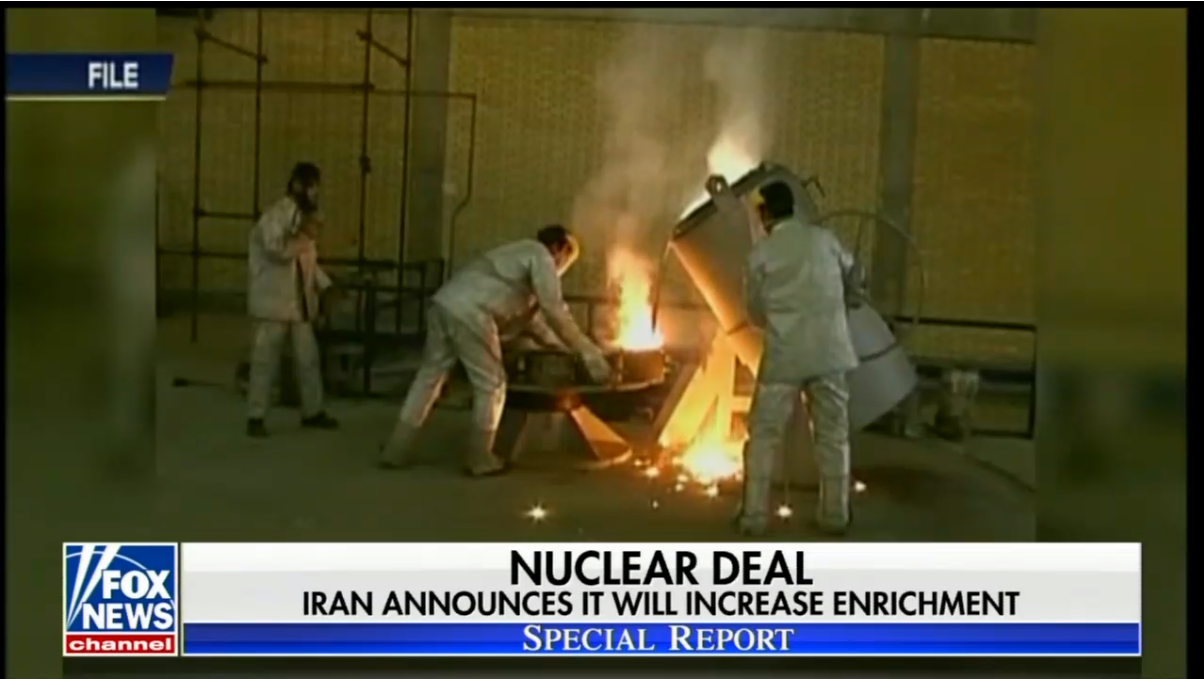 The liberal media would do anything to protect former President Obama’s legacy, even siding with the radical Islamic regime in Iran apparently. That seemed to be the case Tuesday evening as all three of the major broadcast networks (ABC, CBS, and NBC) ignored Iran announcing they planned to ramp up their uranium enrichment program during their evening broadcasts. There was also a report by The New York Times that said the Iranians had recently completed construction of a “centrifuge assembly center.”

Where the liberal networks fell short, Fox News Channel’s Special Report excelled. “Iran says it's increasing its nuclear enrichment capacity. It’s seen as a warning to the western nations still in the nuclear deal of what could happen if it fails or falls completely apart,” announced anchor Bret Baier at the start of the segment.

“In a news conference broadcast on state television, the director of Iran's atomic energy organization said the country would begin building advanced centrifuges at its Natanz facility soon,” reported Fox News correspondent Benjamin Hall. He also noted that Iran claimed the increase in enrichment was allowed under the deal. Just further proof of how terrible the infamous Iran deal was.

Iran’s announcement elicited this response from Florida Republican Senator Marco Rubio, as noted by Hall: “If Iran starts enriching they’ve violated the JCPOA and Europe should get out of it. And everybody else who signed it should get out of it because Iran will be violating the deal.”

Instead of reporting on a Republican senator critical of Iran, ABC’s World News Tonight chose to highlight Education Secretary Betsy DeVos getting “grilled” by Democratic ones for not focusing on gun restriction for school safely.

Iran’s actions weren’t just something conservatives and Obama opponents were reporting on, the liberal New York Times touched on it too. “Iran announced on Tuesday that it had completed a new centrifuge assembly center at the Natanz nuclear site, in a first step to increasing its enrichment capacity,” Thomas Erdbrink wrote.

As the Media Research Center has shown, this kind of blackout of Iran’s actions was a common tactic for these liberal networks to downplay their hostility. They have a long history of overlooking the Iranian Revolutionary Guard’s harassment of U.S. Navy vessels. Recently, ABC and NBC actually suggested the U.S. and Israel were the ones destabilizing the Middle East despite Iran launching missiles. And around that time, CBS claimed the Iranian people felt like “hostages” to a “hostile White House.”

While they couldn’t find the time to report on Iran’s enrichment ambitions, NBC ended their evening program by celebrating 50 years of Hot Wheels cars. This was the same network that sympathized with the Iranian regime against our president. The network also sports Iran deal-cheerleader Andrea Mitchell, who once claimed suggestions of Iran being a threat were ploys by President Trump.

For CBS’s example of twisted priorities, they ended their show by highlighting a man trying to swim across the Pacific Ocean. When these networks don’t feel the need to go to bat for the radical Islamic regime, they choose not to cover them at all.

BRET BAIER: Iran says it's increasing its nuclear enrichment capacity. It’s seen as a warning to the western nations still in the nuclear deal of what could happen if it fails or falls completely apart. Here is correspondent Benjamin Hall.

BENJAMIN HALL: It's been less than a month since President Trump pulled out of the nuclear deal, and Iranian officials are there going to increase enrichment, a move they say is allowed under the agreement. In a news conference broadcast on state television, the director of Iran's atomic energy organization said the country would begin building advanced centrifuges at its Natanz facility soon. Reaction was swift.

HALL: Supreme Leader Ayatollah Ali Khamenei made the announcement in which he or order the increase in enrichment capacity.

AYATOLLAH ALI KHAMENEI (via translator): The Iranian nation and government will not standby suffering from sanctions nuclear limitations.

HALL: The initial increases are modest. Iran claims it would still be within the limits set by the 2015 agreement. Under which, Iran is allowed to enrich up to 3.67 percent. 90 percent is needed for a bomb. But the decision to restart appears to more of a warning to the remaining signatories of the nuclear deal of consequences if it were to collapse. Israeli Prime Minister Benjamin Netanyahu is currently on a tour meeting with European leaders, and when asked what he wanted to discuss, he replied only Iran, Iran, Iran.

BENJAMIN NETANYAHU: The greatest threat to the world today, in my view, is nuclear weapons in the hands of a radical Islamic regime like Iran.

HALL: Although European powers still back the deal, they have concerns over Iran's ballistic program and its influence across the Middle East. Iran says the two issues are non-negotiable. Without the U.S., it seems unlikely the Iran deal will survive. Already, major international companies are distancing themselves from Iran for fear of U.S. sanctions. And it feels now as of the ball is in Iran's court. Bret.