Amid Their Roseanne Firestorm, ABC Whines: Trump Hasn’t Condemned Her Yet! 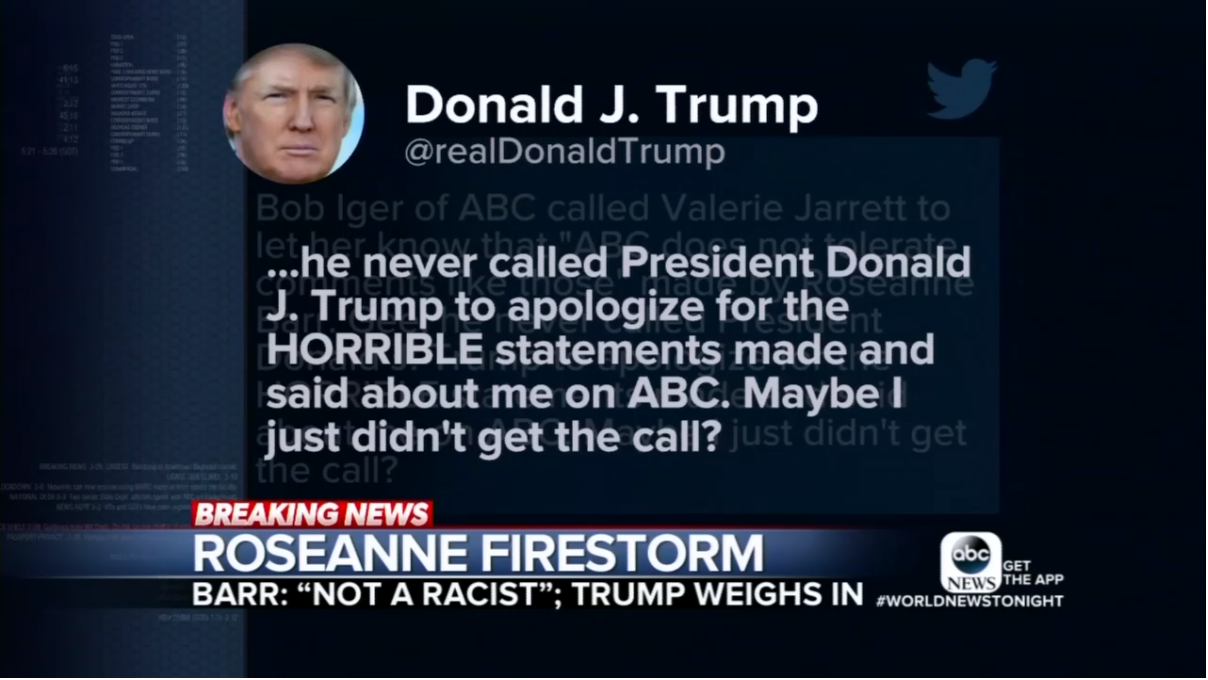 Since canceling ratings-powerhouse Roseanne on Tuesday, ABC and Disney have been under tremendous fire for even hiring Roseanne Barr given her long history of racism and unhinged antics. And in a tweet Wednesday, President Trump called out the company’s double standard of keeping on other such people but who target him.

Instead of keeping their head down and taking their lumps, ABC actually complained about the White House pointing out their double standard and Trump not condemning their former star.

“Tonight, President Trump, who celebrated Roseanne before … has so far not condemned her racist words,” decried ABC national correspondent Matt Guttman as he played a clip of Trump touting her ratings. “Instead, the President tweeting about Disney CEO Bob Iger, the head of ABC's parent company, after Iger called Jarrett personally to apologize for Roseanne's racist tweet.”

In classic ABC News fashion of only telling half the story, Gutman’s clip cut out the part were Trump was praising the show because it represented blue-collar workers like he did.

ABC and Disney still have no good explanation of why they decided to hire Roseanne in the first place (besides for the ratings) given that this wasn’t the first time she’s compared a black Obama official to an ape and not to mention her ‘burnt Jew cookies’ photo shoot. The White House also called out the network for their hypocrisy in keeping on other vile people such as Joy Behar, ESPN’s recent re-rehire of the loon, Keith Olbermann, and the sports network’s unwavering support for Jemele Hill.

In the White House press briefing on Wednesday, Press Secretary Sarah Huckabee Sanders called out the liberal company for their blatant double standard:

Where was Bob Iger's apology to the White House staff for Jemele Hill calling the president and anyone associated had him a white supremacist? To Christians around the world for Joy Behar calling Christianity a mental illness (…) [W]here was the apology for Bob Iger hiring for ESPN Keith Olbermann after his numerous expletive-laced tweets saying the president is a Nazi and even expanding Olbermann’s role after that attack against the President's family.

Of course, Gutman complained about this too. “When pressed on this today, the White House at first complained of a double standard, before eventually saying no one is defending Roseanne,” he said. Again, he failed to mention the examples Sanders gave and made it seem like none were given or existed.

HLN host S.E. Cupp, who has been on the receiving end of one of Olbermann’s sexist assaults described him on her show Wednesday as “one of television's most prolific misogynists.” Back in 2011, his took to Twitter and said, “On so many levels she’s a perfect demonstration of the necessity of the work Planned Parenthood does.”

NBC Nightly News also got in on whining about the exposing of the double standard. NBC’s Anne Thompson mocked Trump’s accurate claims of bias by pointing to a Twitter joke made by liberal hand puppet and late night host Jimmy Kimmel, the same white guy who attacked Cuban-American Republican Senator Ted Cruz (TX) for his looks.

Despite the facts, she also insisted Sander’s points were nothing but “spin.”

This denial of a double standard by NBC was amazingly tone-deaf given their recent dust-up with on-air “talent” Joy Reid, when it was exposed that she had authored homophobic and bigot blog posts. The network stuck by her and she was allowed to keep her weekend MSNBC show. NBC also allows Al Sharpton to have his own weekend show on MSNBC despite his long history of derogatory comments against Jews.

Thompson also spoke with “prominent author on race in America” Michael Eric Dyson. He touted Roseanne’s firing as a “racial #MeToo moment.” He’s a regular on CNN, MSNBC, and ABC even though he claimed ‘brown skin” Republicans could be “white supremacist[s].”

This is a perfect example of the old saying, “those who live in glass houses shouldn’t throw stones.” Because while these liberal networks push back on Trump’s assertion of a double standard as fake, it’s real and it’s observable.

The relevant portions of the transcripts are below, click "expand" to read:

GUTMAN: -- Has so far not condemned her racist words. Instead, the President tweeting about Disney CEO Bob Iger, the head of ABC's parent company, after Iger called Jarrett personally to apologize for Roseanne's racist tweet.

And this morning, the President tweeting, "He never called President Donald J. Trump to apologize for the horrible statements made and said about me on ABC. Maybe I just didn't get the call?" Ignoring Roseanne's words completely. When pressed on this today, the White House at first complained of a double standard, before eventually saying no one is defending Roseanne.

SARAH HUCKABEE SANDERS: The President is simply calling out the media bias, no one is defending what she said.

MICHAEL ERIC DYSON: This is the racial #MeToo moment, isn't it?

ANNE THOMPSON: Michael Dyson is a prominent author on race in America.

DYSON: This is a particular moment where your race baiting and your bigotry and your violent racism have to be taken into account and things are changed.

VALERIE JARRETT: Bob Iger, who’s the CEO of Disney called me before the announcement. He apologized.

THOMPSON: That got President Trump's attention. He tweeted, Iger never called him “to apologize for the horrible statements made and said about me on ABC. Maybe I just didn't get the call.” ABC Late Night host Jimmy Kimmel responded, “maybe you were out playing golf?” Trump's press secretary put a different spin on it.

SARAH HUCKABEE SANDERS: This is a double standard that the President is speaking about. Nobody is defending her comments. They are inappropriate.

ROSEANNE BARR (a clip from the show): Thank you for making America great again!