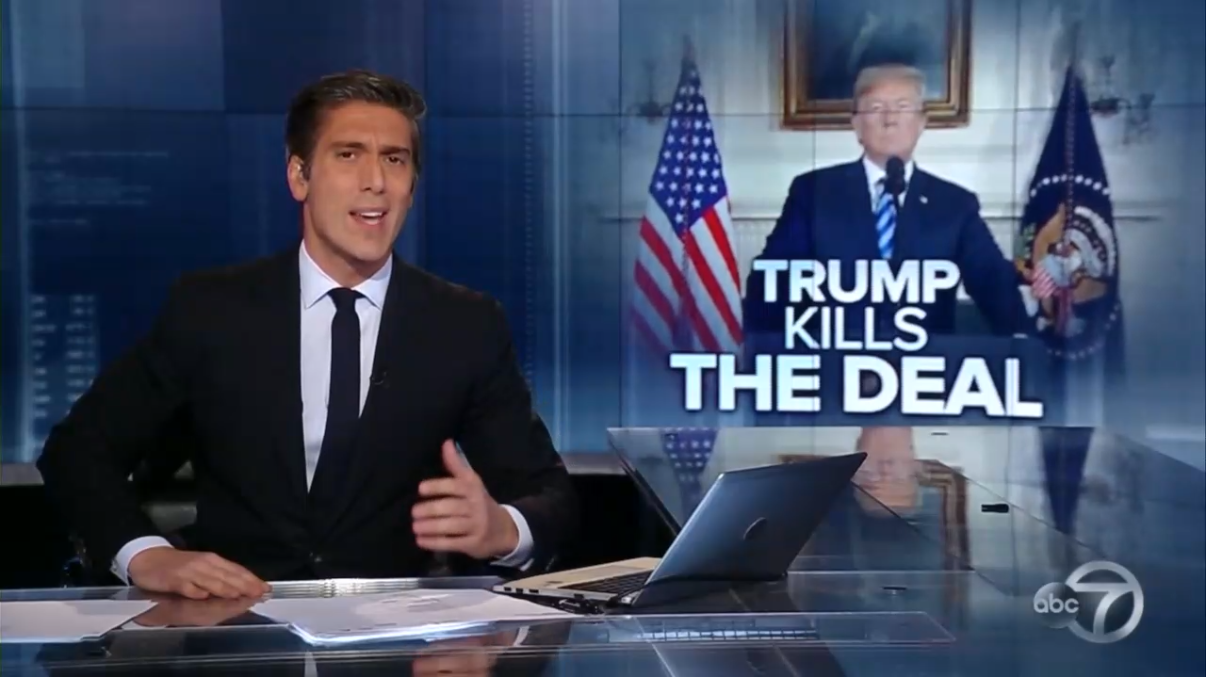 President Trump fulfilled his campaign promise to pull out of the Iran nuclear deal Tuesday, much to the screeching of the liberal media and world leaders. All three of the major broadcast networks (ABC, CBS, and NBC) began their evening news broadcasts in a tailspin, appalled by the President defying our allies, shattering our credibility as a country, and possibly leading us into a war.

They each ran not one but two segments hyperventilating about the pull out. And a common theme was how it was damaging Obama’s legacy.

“America's allies had urged the President not to do this,” anchor David Muir announced at the start of ABC’s World News Tonight. “They are reacting tonight, and so is Iran already with a new threat.” And the network’s chief White House correspondent, Jon Karl, parroted the sentiment and kicking off his report by saying: “Defying our allies and keeping a campaign promise, President Trump is taking the United States out of the Iran nuclear deal.”

Karl noted that Trump found that the deal fell short in stopping Iran’s financing of terrorism, but no mention of the $1.7 billion cash payment the Obama administration agreed to give them. But he managed to feel sorry for Obama since his legacy was being tarnished:

Anguished by today's decision, former President Obama. The Iran deal, his chief foreign policy accomplishment. Today in a statement, he warns, "The United States could eventually be left with a losing choice between a nuclear-armed Iran or another war in the Middle East."

In their second report, ABC was worried about how foreign countries and the Iranian people saw the U.S. “They are dismayed and bewildered right now,” ABC reporter Terry Moran said about U.S. allies. “Anger and defiance, (…) saying America's arrogant and can't be trusted,” for the Iranian perspective.

On CBS Evening News, anchor Jeff Glor began the program by declaring: “Candidate Trump promised to pull out of it. Today, President Trump did. With widespread implications.” “President Trump took the most aggressive path out of the deal,” asserted correspondent Weijia Jiang citing the application of U.S. sanctions.

“Mr. Trump is celebrating it as a campaign promise fulfilled. By pulling out of the agreement, the President reverses one of the Obama administration's signature foreign policy legacies,” she continued to huff. “Today, the former president called withdrawal ‘A serious mistake.’”

In CBS’s second report, reporter Elizabeth Palmer was in Tehran (a perk from being on good terms with the government) and said that the Iranians were planning to stay in the deal if it still benefited them, something ABC didn’t do. She ended her report by talking about instability in the region and incorrectly pointed the figure at Israel, citing a recent strike on an Iranian military installation in Syria as an example. 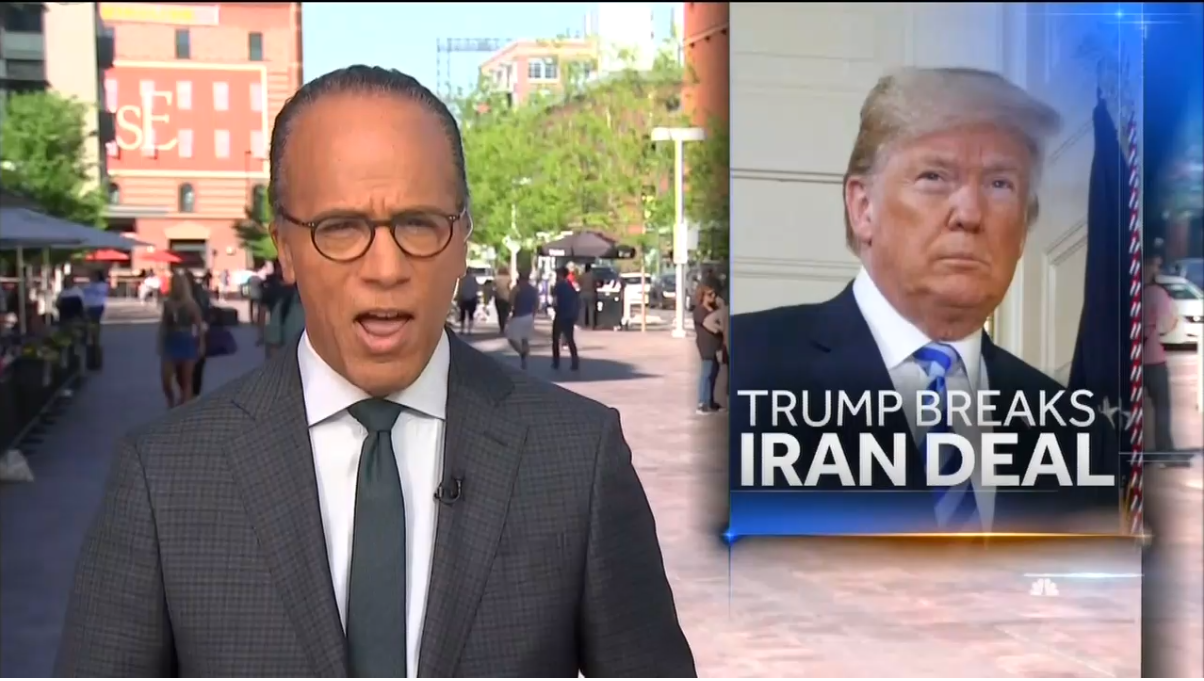 Meanwhile, on NBC Nightly News, Lester Holt described Trump’s decision as the U.S. “essentially reneging” on the agreement. Although, White House correspondent Hallie Jackson noted: “The President never liked that the deal let Iran start up some activity again in 2025 and that it didn't address other bad behavior, like Iran's ballistic missile program.”

But Jackson still turned to President Obama and his former CIA director, John Brennan, to rip into the move. She reported that Obama warned the decision “risks eroding America's credibility” and played a clip of Brennan fretting: “Mr. Trump has sent the signal, do not count on the United States, you can't believe what we say.” This is the same CIA director whose agency hacked the computers of U.S. Senators because they were set to release the damning torture report.

NBC chief foreign correspondent Richard Engel began the network’s second segment by explaining how Iran planned to stay in the deal for now. But he described a “chill” among U.S. allies in Europe because “the U.S, under President Trump, may not be a reliable partner anymore.” He also feared for what it could mean for the upcoming negotiations with North Korea. “They'll now want more guarantees for any agreement they'd make. So, the price just went up,” he speculated.

The relevant portions of the transcript are below, click "expand" to read:

DAVID MUIR: Good evening. And it's great to have you with us here on a very busy Tuesday night. And we begin with President Trump's major announcement today, being watched all over the world. Pulling the U.S. out of the Iran nuclear deal and imposing tough new sanctions on Iran instead. The President in the speech seen here in the U.S. and carried live in Iran, calling the deal disastrous. America's allies had urged the President not to do this. They are reacting tonight, and so is Iran already with a new threat. ABC's chief White House correspondent Jonathan Karl leading us off.

JON KARL: Defying our allies and keeping a campaign promise, President Trump is taking the United States out of the Iran nuclear deal.

KARL: Under the Iranian nuclear deal, Iran agreed shut down its production of weapons-grade uranium and allowed regular inspections by the international atomic energy agency, which says Iran has stuck by its side of the deal. But the president says it falls short, that it doesn't prevent Iran from supporting terrorism or building up its missile program.

KARL: Anguished by today's decision, former President Obama. The Iran deal, his chief foreign policy accomplishment. Today in a statement, he warns, "The United States could eventually be left with a losing choice between a nuclear armed Iran or another war in the Middle East." And tonight, from Iran's president, an ominous threat -- Hassan Rouhani announcing he's ordered Iran's scientists to prepare to start enriching uranium again if necessary. When I recently asked the president about that prospect, he answered with a threat of his own.

MUIR: American allies urged the President not to do this, to stay in the deal. Our chief foreign correspondent Terry Moran live in London tonight and our allies already responding tonight?

TERRY MORAN: That's right, David. They are dismayed and bewildered right now. You saw the European leaders, President Macron of France getting the red carpet treatment at the White House, Chancellor Merkel of Germany meeting with President Trump, trying to change his mind, because they and every other country that signed this deal think this deal is working.

MUIR: And Terry, one more question while we have you. Viewers will remember our trip to Iran. We witnessed the sanctions, the crippling effect on the Iranian people before this nuclear deal was even negotiated. It was just days before the negotiations began, in fact. The crowds waiting for medicine, cancer treatment. We heard President Trump today telling the Iranian people, “the people of America stand with you,” but how is this decision being received on the streets of Tehran tonight?

MORAN: Anger and defiance, David. They do not believe that claim. Social media in Iran just lit up with a lot of anti-American tweets, that's no surprise, saying America's arrogant and can't be trusted.

JEFF GLOR: Good evening. We're going to begin with the Iran nuclear deal. Candidate Trump promised to pull out of it. Today, President Trump did. With widespread implications. The President, who calls the deal defective at its core, is reimposing economic sanctions on Iran. In response, Iran's president threatened to start enriching uranium again and Britain, France, and Germany, all signatories to the deal, say they will try to salvage it. We have reports tonight from Washington and Tehran. First, Weijia Jiang is at the White House.

WEIJIA JIANG: President Trump took the most aggressive path out of the deal, announcing the U.S. will reinstate the highest level of economic sanction on Iran.

JIANG: The President declared he had definitive proof that Iran had violated the 2015 agreement aimed at freezing the country's nuclear ambitions, but produced no evidence. These were the President's top military advisers last fall.

JIANG: Iranian president Hassan Rouhani insisted today it is the U.S., not Iran, that has broken the agreement, but said he may soon restart his country's nuclear program. France, Germany, and the U.K., also parties to the deal, issued a joint statement that expressed regret and concern over the U.S. exit.

JIANG: Mr. Trump is celebrating it as a campaign promise fulfilled. By pulling out of the agreement, the President reverses one of the Obama administration's signature foreign policy legacies. Today, the former president called withdrawal "A serious mistake."

LIZ PALMER: Here in Iran, President Hassan Rouhani went on TV almost immediately to respond. He said pulling out of the deal had damage's America's credibility, but crucially, he said that as far as Iran is concerned, the nuclear deal is not yet dead. Iran, he said, will try, with the other five signatories, to make the agreement work, minus the United States. But there's no guarantee.

Major powers around the world tonight have called President Trump's decision a mistake, all, except for the United Arab Emirates, Saudi Arabia, and Israel. This is already a volatile region, and in a reminder today, Israel fired missiles into Syria and, according to monitoring groups, killed several Iranian Revolutionary Guard fighters.

LESTER HOLT: But we begin with that big decision announced by President Trump today, that the U.S. is essentially reneging on the nuclear deal with Iran. The President's decision to walk away from the pact, which was designed to inhibit Iran’s ability to make a nuclear weapon, comes despite pressure from key European allies that were also signatories to the deal, as well as repeated findings by his own administration, that Iran was in compliance with the agreement. But for Donald Trump, it's a campaign promise made, promise kept. Albeit one with uncertain consequences.

HALLIE JACKSON: The 2015 deal forced Iran to get rid of 95 percent of its nuclear fuel and allow outside inspections in exchange for relief from tough international sanctions. But the President never liked that the deal let Iran start up some activity again in 2025 and that it didn't address other bad behavior, like Iran's ballistic missile program.

JOHN BRENNAN: Mr. Trump has sent the signal, do not count on the United States, you can't believe what we say.

JACKSON: Here at home, new sanctions might make it harder for Iran to sell its oil. That could trigger higher prices, which may mean you end up paying more for gas.

RICHARD ENGEL: This is Richard Engel. Instant reaction to President Trump's announcement in Iran, where President Hassan Rouhani came out, near midnight, to says he will stick with the deal even without the U.S. But threatening what could happen if the now wounded agreement crumbles entirely. If Iranian benefits in the deal aren't provided, he said, Iran is ready to resume industrial nuclear activity.

Across Europe, there's a chill tonight that the U.S, under President Trump, may not be a reliable partner anymore. An unusual joint statement read, “it is with regret and concern that we, the leaders of France, Germany and the United Kingdom take note of President Trump's decision.”

ENGEL: But this move today by President Trump will make North Korea and especially its backer China very nervous. They'll now want more guarantees for any agreement they'd make. So, the price just went up, Lester.