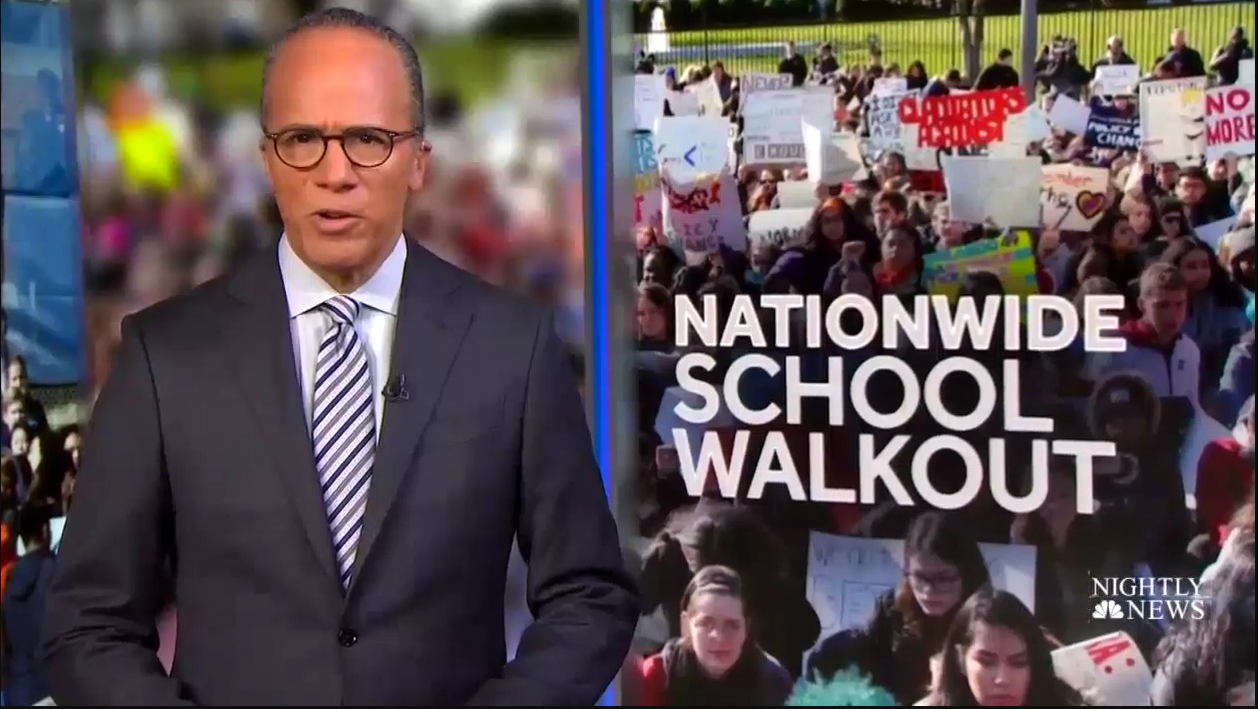 Not only did the major liberal English broadcast networks (ABC, CBS, and NBC) and Spanish-language networks Univision and Telemundo ignore a lawsuit alleging a House Democrat of "child sex abuse" during their Thursday evening broadcasts, they also completely overlooked the student-led Stand for the Second nationwide school walkout against gun control. This blackout came after they collectively spent 10 minutes celebrating the nationwide walkout led by anti-gun Parkland students back in April.

As the Media Research Center study into the network coverage of the anti-gun walkout found:

It was a tale of two protests. (…) On Wednesday, the three broadcast networks (ABC, CBS, NBC) never once mentioned the pro-life walkout during their news shows on the night of the event, April 11. In contrast, the same evening shows devoted more than 10 minutes to the gun walkout the day it happened. This comes after the networks covered the March for Our Lives 13 times more than the pro-life March for Life.

Despite the fact the walkout occurred Thursday morning, CBS News didn’t seem to find time to publish a report online about it until well after CBS Evening News was off the air. Although, they were the only network in the big three to even go that far.

“The ‘Stand for the Second’ event was launched in response to student-led walkouts in March to show that not all students agree more gun laws are the answer to protect schools,” wrote CBS’s Christopher Brito. “The March protests against gun violence involved students at thousands of schools from coast to coast; Wednesday's events were more modest in size, but still passionate.”

While he was sure to remark on the “modest” size of the walkout, the CBS reporter never mentioned that the anti-gun walkout had tremendous help in promoting their cause through the media’s vigorous support. On MSNBC, they even urged viewers to sign a promise to vote anti-gun. And in the run-up to the pro-gun walkout, they didn’t give them a single second of promotion.

From the networks alone, the anti-gun students got huge amounts of airtime. As another MRC study found:

Since February 15 (the day after the Parkland, Florida school shooting) through March 19, the Big Three (ABC, CBS, and NBC) morning and evening news programs have aired a whopping 69 stories, plus an additional nine interviews, talking about the students’ anti-gun efforts. During that same time, these networks failed to run even a single story mentioning any of the students from the same high school (like Kyle Kashuv) who have openly championed the Second Amendment.

In all, they aided anti-gun advocates at a rate of 11 to one in terms of who they went to for opinions and analysis. That’s not to mention the hordes of liberal activist groups and celebrities who came together to give them a boost.

In spite of the media’s bias against them, the Stand for the Second walkout appeared to be a great success judging by the tweets put out. For all the media’s bloviating about how the anti-gun student faced an uphill battle against the NRA, those who want to preserve their right to bear arms faced the liberal bias of the media.