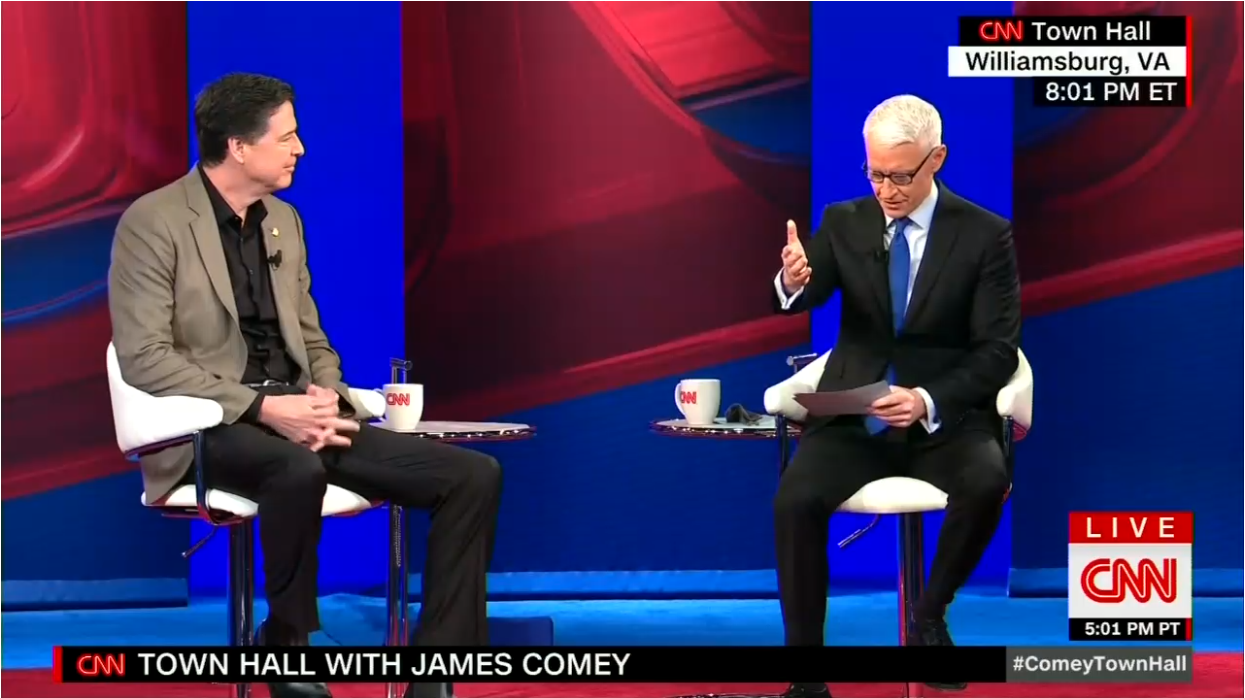 CNN’s major primetime event on Wednesday night was their town hall featuring former FBI Director James Comey taking questions from the students, faculty, and staff at the Collehe of William and Mary (his alma mater). Being a town hall-style event, the evening was filled to the brim with questions, a majority of which were asked by moderator Anderson Cooper. But when it came to the questions asked by those in attendance, they asked eight questions critical of Trump with only four critical of Comey.

In all, there were some 58 questions asked throughout the night and the questions from the audience only numbered 21. And while the questions touched on many topics, eight of them were critical of President Trump in some way. Of the four questions critical of Comey, three were about him specifically (including questions about his leadership and motive) and only one was about his handling of the Hillary Clinton e-mail investigation.

An analysis of the dichotomy on the town hall questions is important because, as the Media Research Center has documented throughout the years, CNN has a habit of prescreening the questions and picking the ones they like and help push their narrative. And while they only picked one student to question Comey about the e-mails, they appeared to largely leave it up to Cooper who asked five questions on the subject.

And straight from the get-go, the Trump-critical questions CNN allowed were off the rails.

The first question was posed by a graduate student named Zachary Smith, who wanted to know about Trump’s fitness for office (a question CNN has been pushing for months, particularly his mental fitness). “Do you believe that President Trump possesses the moral and mental capacities needed to effectively lead our armed forces given his unprecedented loyalty he pledged, the general temperament, and the documented outbursts,” he wanted to know.

Comey responded by first praising the audience for attending the event. “You’re trying to get them on your side right away,” Cooper joked. “If they are not on my side, I am out of luck,” Comey laughed. That exchange was interesting given the CNN-led lynch mob that was their Parkland town hall, complete with accusations of scripted questions.

After a question to Comey about whether or not he broke the law for leaking his memos, Cooper went to a student who crudely asked about the Steele dossier. “What do you think would happen if there were so-called ‘pee tapes’ and they were leaked to the public tomorrow would it matter in the long run,” she said. That was followed up with a question from a professor regarding President Trump’s possible criminal background:

What else do you think Putin might have on Trump that makes Trump so reluctant to criticize Russia? Do you think it might be proof Russian organized crime money has been laundered through Trump’s businesses?

And while it wasn’t a question about Trump, CNN felt the need to have a student ask yet another question about gun control in the wake of Parkland and the so-called “March for Our Lives.” The student even parroted the long-debunked claim there had been over 18 school shooting this year. So much for “Facts First” on CNN. Comey actually praised the students and was looking forward to gun control.

Of the 21 questions, the students asked, there was only one that could be argued was 'pro-Trump,' and it was about forgiveness: “In open reconciliation between the two of you could not only allow our country to recover and unite but would also demonstrate leadership. Have you begun to forgive the President?”

A sampling of the town hall questions from the transcript are below (click "expand" to read):

ANDERSON COOPER: To we got a lot of questions from students, faculty and staff so, let's get through this. This is Zachary Smith. He’s getting his masters in chemistry. Zachary, what’s your question?

ZACHARY SMITH: Hi Director Comey. Do you believe that President Trump possesses the moral and mental capacities needed to effectively lead our armed forces given his unprecedented loyalty he pledged, the general temperament, and the documented outbursts?

JAMES COMEY: Thank you for that question. Really important question. Ten seconds just to thank the students of William and Mary for coming out and looking so good tonight. Thank you. Thank you.

COOPER: You’re trying to get them on your side right away.

COMEY: If they are not on my side, I am out of luck.

COOPER: I want to go to Evelyn Lawhorn, a senior studying government.

EVELYN LAWHORN: Hi, my questions was: Do you think there is any credence to the President's claims that you broke the law when you released your memos?

COOPER: The next question is from Julia Wicks, she’s a junior studying English and she has a question about some of the allegations in the Steele dossier.

JULIA WICKS: Hi. What do you think would happen if there were so-called “pee tapes” and they were leaked to the public tomorrow would it matter in the long run?

COOPER: Next question is from Carl Fredericks—excuse me—Friedrichs, a professor of marine science here at William and Mary. Carl?

CARL FRIEDRICHS: Hello. What else do you think Putin might have on Trump that makes Trump so reluctant to criticize Russia? Do you think it might be proof Russian organized crime money has been laundered through Trump’s businesses?

COOPER: Next question is from Daniel Powers. We got a lot of questions from student, obviously, about the decisions you made before the 2016 election. That is going to come as in surprise for you. Daniel is a senior studying history and computer science. Daniel?

DANIEL POWERS: Good evening. There’s [a] very compelling case to be made that your announcements, especially [your] October 28 announcement, cost Hillary Clinton the election. At the same time, you never disclosed how Trump was involved in an FBI investigation into the Russians. Should you have disclosed that to the American public?

COOPER: I want to bring in another student. This is Emily Holtzman. She is a senior studying government. Emily?

EMILY HOLTZMAN: Mr. Comey, my question for you is if you wanted the bureau to remain independent why did you factor in the legitimacy of a Hillary Clinton victory into your decision to announce she was being investigated prior to the election? Isn't this a political consideration?

COOPER: I want you to meet Brian Connelly, he’s a junior studying government.

BRIAN CONNELLY: Thank you. In recent weeks, President Trump has nicknamed you slippery Comey. What is your nickname for him?

ARIA AUSTIN: Good evening. Student-led marches and walkouts have occurred all over the country including here in Williamsburg in response to the 20 school shootings taking place only 16 weeks in 2018. The issue of gun control is a major topic of discussion in America right now and young people are taking control of that narrative. Do you think the March for Our Lives movement and several others will effectively lead to stricter gun control laws? And if so, why now?

ROBERT COLTER: I'm a Californian, a Mexican and a Republican. And my friends often urge me to switch parties. And sometimes I've been tempted. But I won't. Because to me it's still the party of Lincoln, of Ike, George H.W. Bush, his son, and my family. That being said, I think the way Trump -- I think his demeanor has been offensive to Republican norms and civil discourse. What first attracted you to the Republican Party and what do you think is a positive message we could rally around today?

IAN DOTY: Mr. Comey the conflict between you and President Trump had begun to characterize divisions within our country. In open reconciliation between the two of you could not only allow our country to recover and unite, but would also demonstrate leadership. Have you begun to forgive the President? Do you think you could ever do so?