CNN Rebukes Student's Claims of ‘Scripted’ Questions, But Have Long History of It 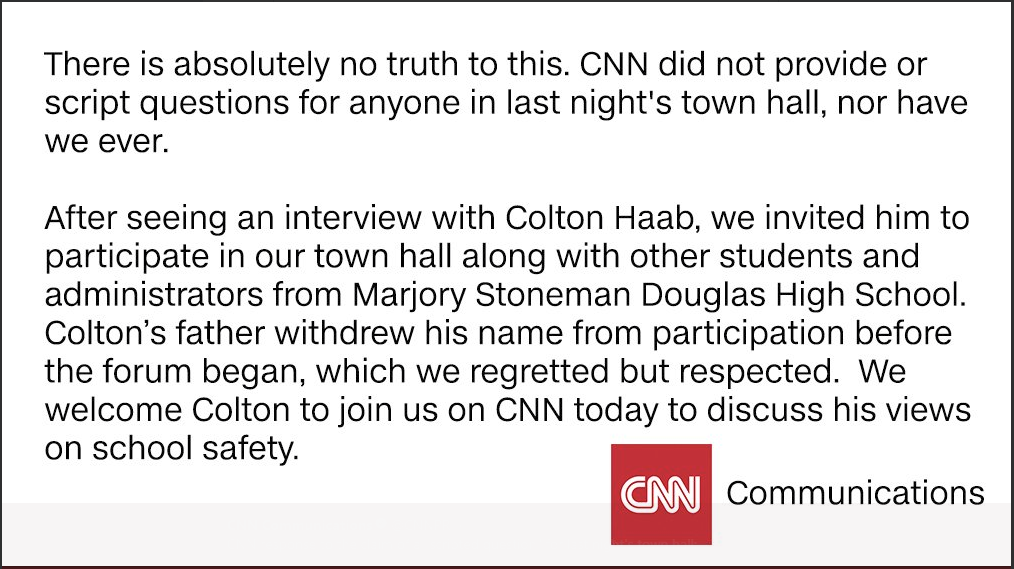 In the wee hours of Thursday morning, CNN began taking heat for supposedly scripting much of their train wreck gun control town hall from just hours earlier. Colton Haab a Parkland shooting survivor, who protected his fellow students, told a local ABC affiliate that CNN would not allow him to ask the questions he had prepared and wanted him to read theirs.

CNN responded to the widely-reported accusations in an early morning tweet from their public relations Twitter account. “There is absolutely no truth to this,” the statement began. “CNN did not provide or script questions for anyone in last night’s town hall, nor have we ever.” The network concluded by saying that Haab was welcome to join their anchors on TV to “discuss his views.”

But CNN’s assertion that they didn’t script Wednesday night’s event might not hold up well under scrutiny. And when it came to their claim that they never had a scripted event or planted questions, it’s easy to discover they have a long history of planting questions and tipping the balance of discussions.

One instance of a scripted question that should stick out for most, occurred during a 2007 Democratic presidential debate when CNN partnered with YouTube and they fielded a question from a ridiculous animated snowman. “Billiam the Snowman” pressed the candidates on global warming and noted how it was bad for snowmen.

In sharp contrast, during the Republican version of the CNN/YouTube debates that same year, they had retired general Keith Kerr, a gay man, question the candidates about LGBT personnel in the military. The network failed to mention that he was a member of LGBT Americans for Hillary Steering Committee.

Debate moderator and then-CNN host Candy Crowley was involved in an infamous 2012 display of tipping arguments when she sided with President Obama and against Governor Mitt Romney. Obama lied in saying he called the Benghazi attack terrorism and when Romney rebuked him, Crowley stepped in. “Crowley endorsed Obama’s version, telling Mitt Romney: ‘He did, in fact, sir, call it an act of terror,’” the MRC wrote at the time.

As NewsBusters columnist Michelle Malkin wrote in the New York Post over two years ago, “CNN has a long history of allowing political plants to flourish in its public forums,” and exclusively for the left.

In regards to that same CNN/YouTube GOP debate from 2007, Malkin recalled that they included a questioner that was “a supposed ‘undecided’ voter who urged Ron Paul to run as an independent, but who had already publicly declared his support for former New Mexico Gov. Bill Richardson’s Democratic presidential bid.” “A staffer for Sen. Dick Durbin (D-Illinois), a former intern for Rep. Jane Harman (D-California) and a former intern for the Council on American-Islamic Relations,” Malkin added.

Malkin also noted that CNN did the same thing during the push for ObamaCare. At a town hall event, CNN included “an operative for the Washington, DC-based Health Care for America Now, the K Street Astroturf outfit with a $40 million budget to lobby for government-run health care that directed its activists to “drown out” opponents at town hall meetings.”

CNN can deny that they scripted the town hall this time, but saying they never scripted anything at all was going too far. In fact, given their history, their denials should be received with great skepticism.