ABC, NBC Neglect Support for Tariffs from Some Senate Democrats 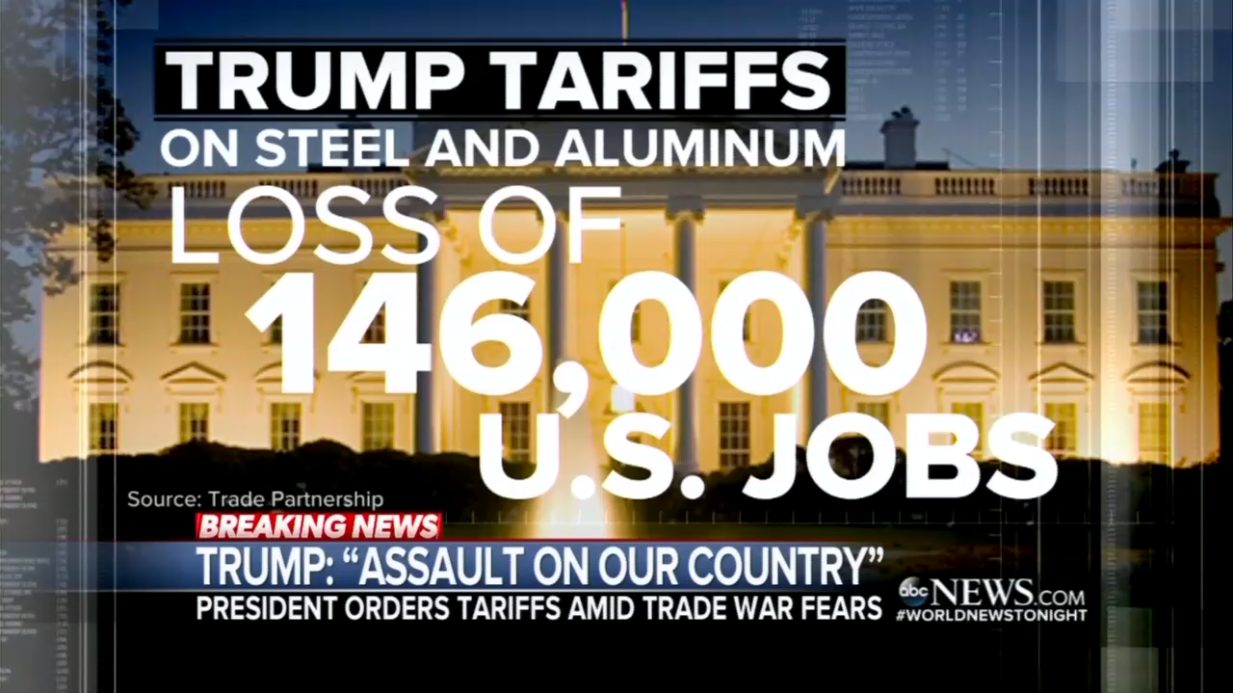 As unpopular and questionable as President Trump’s new tariffs on steel and aluminum were, they did have some appeal to a seemingly unlikely group: Senate Democrats (along with a few House members). With the President signing the necessary documents in front of the cameras on Thursday flanked by American steelworkers, Senators let the press know they supported the move. But if you were only watching ABC’s World News Tonight and NBC Nightly News, you would think there was only opposition.

Even though they only gave one example, CBS Evening News was the lone network program to even mention the support for tariffs from some Democrats. “Some of the strongest support for the plan came from rust belt Democrats like Joe Manchin of West Virginia,” reported national correspondent Chip Reid.

“I'm encouraged. I really am. And I think it gives us a chance, basically, to reboot, get jobs back to West Virginia, back to America. I'm excited about that,” explained Democratic Senator Joe Manchin (W.V.) in the CBS clip.

In addition to Senator Manchin, a few Democrats such as Ohio Senator Sherrod Brown, Pennsylvania Senator Bob Casey, and Indiana Senator Joe Donnelly put out press releases with glowing support for the tariffs.

“When foreign countries cheat on trade, Pennsylvania workers lose their jobs. I commend the Administration for taking action,” Casey said. He even asked for Trump to “refine this order” by going further and ratcheting it up by “consider[ing] additional action on downstream products, like transformer cores.” The Senator also urged Trump to “go after China and other trade cheaters.”

Meanwhile, Brown sounded like he was reading from a Trump stump speech:

For far too long, Chinese cheating has shuttered steel plants across our state and put Ohioans out of work. Today’s action finally sends a clear message to our trading partners that we aren’t going to allow them to cheat Americans out of their jobs and infect global markets. By standing up for steel jobs today, we’re also protecting American jobs up the supply chain from becoming the next victims of Chinese cheating.

Donnelly stated that he was “pleased that President Trump is taking action,” and planned to “carefully review the details of his proclamations.” He wanted the tariffs because, “trade is critical for Indiana’s economy—from our manufacturers to our farmers—but it must be fair. For too long Hoosier workers have fought unfair competition from countries like China.”

Where these Democrats were on board with the President, ABC and NBC focused almost solely on those who disagreed. “The President calls the tariffs a matter of national security, but sources familiar with the deliberations tell ABC News that national security adviser, H.R. McMaster and defense secretary James Mattis are both opposed,” ABC’s Jon Karl said. “In Congress, Republicans overwhelmingly oppose the tariffs.”

While the full ramifications of the tariffs were yet to be determined, the liberal media were more in favor of just piling on Trump by just showing the opposition.

CHIP REID: Some of the strongest support for the plan came from rust belt Democrats like Joe Manchin of West Virginia.

JOE MANCHIN: I'm encouraged. I really am. And I think it gives us a chance, basically, to reboot, get jobs back to West Virginia, back to America. I'm excited about that.