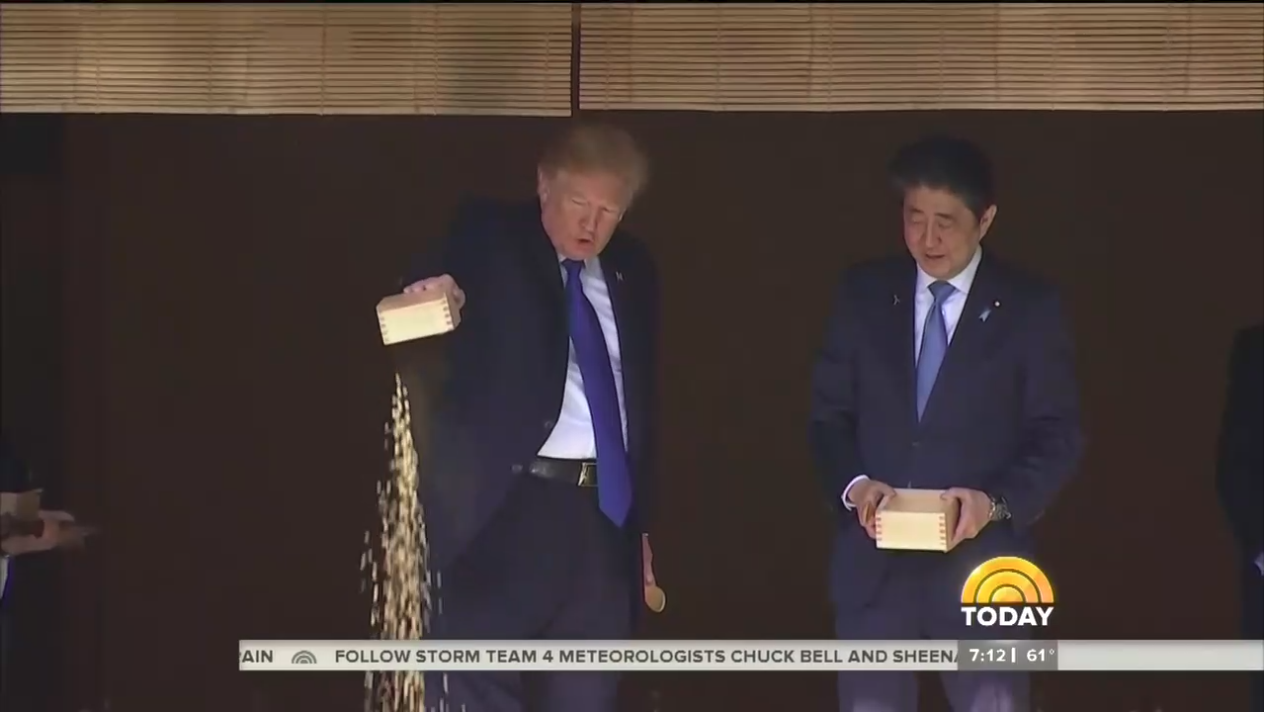 While President Trump was away on a foreign trip to Asia, the liberal media spent late Sunday and Monday creating a false narrative of him “breaking protocol” by dumping fish food into a koi pond. The pretend grave offense occurred when Japanese Prime Minister Shinzo Abe was giving President Trump a tour of a state guest facility when they stopped to feed the fish in the famous koi pond under a walkway.

“Trump feeds fish, winds up pouring the entire box of food into a koi pond,” one CNN headline read as if he dumped it in out of cultural ignorance. In the original video put out by CNN's Twitter account, the camera zooms in tight on the President while he threw food to the fish with a spoon before he dumped the whole box into the water. The article’s author, Veronica Rocha promoted this deceptive version of the event with a tweeted GIF of her own.

What wasn’t in CNN’s video was PM Abe leading the way and dumping his box of fish food first before Trump followed. CNN had since used another news outlet’s view of the event which clearly showed what really happened, but the article still sported the deceptive headline.

CNN wasn’t the only news outlet portraying the food dump as some sort of cultural gaffe. On NBC’s Today show, White House correspondent Peter Alexander reported the feeding with an air of shock. “Later, Mr. Trump feeding Asian carp at a koi pond. First tossing spoonful’s of fish food before emptying the entire box!” There was no mention of Trump following Abe’s example but he quickly brought up a future meeting Trump would have with Russian President Vladimir Putin.

During CBS This Morning, the cast was laughing at Trump for his faux pas. “The British Telegraph reports President Trump broke protocol in Japan by dumping an entire box of fish food into a Japanese koi pond,” announced Charlie Rose before then mentioning Abe tossed his first. But, according to his co-host Gayle King: “The President said enough of this spoon stuff … and the Japanese President said: ‘Okay, I’ll do that too.’” King clearly saying Abe dumped his food after Trump did, which again was false.

That wasn’t the only fake news CNN was pushing regarding Trump’s visit to Japan. The CNN Money’s Daniel Shane tried to paint the President as an idiot who didn’t know Japanese car manufactures actually built their vehicles in the U.S. “Trump asks Japan to build cars in the U.S. It already does,” his headline read.

But as pointed out on Monday by The Daily Caller’s Alex Pfeiffer, Trump was actually making a joke, which people in the room laughed at but went unreported by CNN. The transcript of Trump’s comments provided by Pfeiffer clearly demonstrates what actually happened: “Try building your cars in the United States instead of shipping them over. Is that possible to ask? That’s not rude. Is that rude? I don’t think so. (Laughter.) If you could build them.”

The fact that they’re spending any time at all on feeding fish and a joke to create some scandals proves just how much they hate the man and just how they’ll twist anything around. So much for CNN’s Facts First and call an apple an apple campaign.