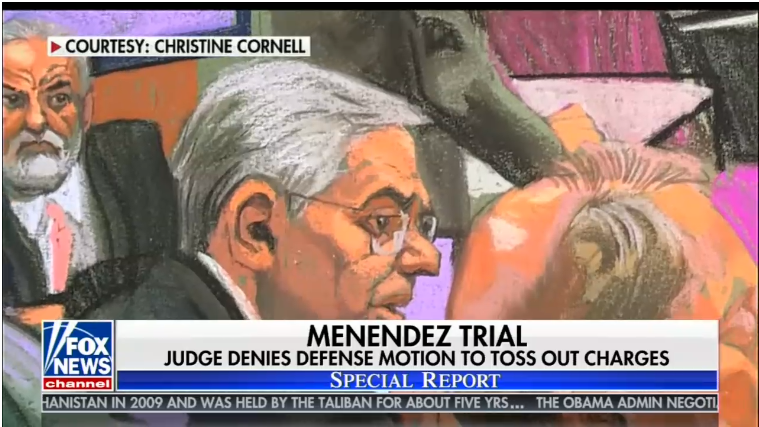 “This is what bribery looks like,” declared federal prosecutor J.P. Cooney on Thursday as the closing arguments in the long-running corruption trial of Democratic New Jersey Senator Bob Menendez took place. The trial had seen contentious exchanges between the defense and the judge, claims of a lack of impartiality, and requests for the case to be thrown and for a mistrial to be declared. The closing arguments themselves were just as fiery, but just as with the rest of the trial, the big three networks (ABC, CBS, and NBC) pretended it didn’t happen.

Since day one, the network evening news shows have not touched the story at. As the Media Research Center’s Mike Ciandella recently reported about the network’s preference for Robert Mueller indictments over Menendez:

But the networks aren’t opposed to covering political scandals – as long as the scandal doesn’t involve their political allies. On the night of October 30 alone, these three evening news broadcasts spent a total of 33 minutes and 9 seconds combined covering the indictments handed out by Special Counsel Robert Mueller. These indictments are obviously news, but the fact that the networks could spend more than half an hour in one night on this story and not a single second in nearly two months on Menendez shows a blatant bias.

And a CNN report following the day in court showed just how appealing the story should be for them to cover. “Prosecutors accuse Menendez of pressuring high-level officials in the Obama administration and other career diplomats to help Melgen resolve his business disputes in exchange for political contributions,” Laura Jarrett wrote. “A luxurious hotel suite at the Park Hyatt in Paris, and free rides on Melgen's private jet that Menendez failed to report on his Senate disclosure form.”

In his argument to the jury on Thursday, Cooney described Menendez as the “personal U.S. Senator” of Dr. Salomon Melgen, the Florida eye doctors alleged to be the financier of the bribery scheme. “Robert Menendez may have been elected to represent New Jersey, but Robert Menendez chose instead to represent the wealthy doctor from Florida,” he said. “This is what bribery looks like.”

And from Menendez’s defense attorney, Kirk Ogrosky came accusations of lying directed at the prosecution. “They're lying to you, they're making up a story and trying to get the evidence to fit their story,” he asserted. “Think about what these prosecutors have done, it's actually pretty terrifying.”

Menendez was the first sitting U.S. senator to be in a corruption trial since the 1980s and the trial proceedings had the hallmarks of a juicy must see courtroom drama, but the liberal networks refused to highlight any corruption accusations against their political allies. And in recent days they’ve proved they’re more interested in speculating about Trump legal future and not that of the Senator in the corruption trial.