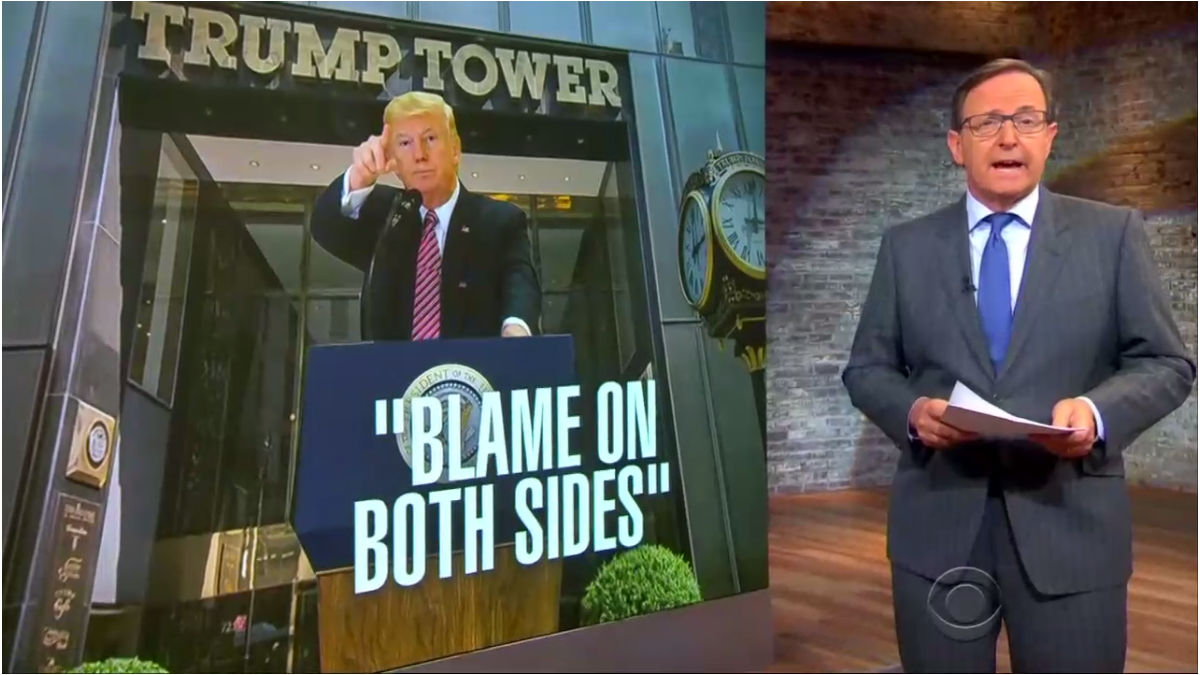 In a jaw-dropping spectacle in the lobby of Trump Tower on Tuesday, the President went off on the media while ranting about his response to the violence in Charlottesville, Virginia over the weekend. Trump stepped in it when he appeared to defend the alt-right and doubled down on his original comments from Saturday. The presentation was originally supposed to be the unveiling of an infrastructure proposal that would overhaul the system.

The Big Three Networks (ABC, CBS, and NBC) could not get enough of Trump’s fiery and furious tirade as he went to battle with the press. And their evening news broadcasts later that day were commanded by the coverage of Trump. Minus their commercials and teasers, the total air time the networks set aside for all their news coverage combined was 58 minutes and 38 seconds. Of that total time, they spent 45 minutes and 31 seconds on Trump’s wild press conference (77.6 percent).

The coverage was absolutely pervasive on CBS Evening News, where they dedicated all 21 minutes and 13 seconds of total news time to the Trump show. That’s right. They used 100 percent of their air time to talk about what Trump said or tie racism back to him in someway. Nothing else was talked about from the whole wide world of news.

On NBC Nightly News, their total news time was 18 minutes and 49 seconds. They came in second with their total Trump press conference coverage accumulating for 13 minutes and 18 seconds (70 percent). That meant they only gave five minutes and 31 seconds to all the other possible stories to cover.

The overwhelming amount of coverage the Big Three Networks afforded to Trump’s spectacle completely drowned out other major news stories of the day.

For instance, CBS and NBC completely omitted how, over night, the murderous North Korean regime blinked and backed down in their game of chicken with the United States. They noted it during their Tuesday morning broadcasts but left only ABC to cover it by evening. One would think the possible aversion of a nuclear attack would be major news.

They also ignored the radical leaders of Iran threatening to pull out of the nuclear agreement. According to the Fox News Channel’s Rich Edson on Special Report: “Iran's President threatens its restored nuclear program would be more dangerous than the one suspended two years ago.” He also noted how their parliament chanted “death to America” as they voted on increasing funds for military programs.

And it had been a day since Politico published a damaging story about how the “Obama team was warned in 2014 about Russian interference,” and did little to stop it. “There was no explicit warning of a threat to U.S. elections,” they wrote. “But the official said some diplomats and national security officials in Moscow felt the administration was too quick to dismiss the possibility that the Kremlin incursions could reach the United States.” There was no mention of this story on Monday or Tuesday.

And for all of their coverage of the Trump’s press conference, the Big Three Networks didn’t discuss the President’s infrastructure proposal in any detail. NBC was the lone network to mention it, but it was only to describe why the conference was called at all.

Instead of covering any of those other major stories, ABC chose to report on a lawsuit between jewelry maker Tiffany & Co. and Costco. Meanwhile, NBC hyped the newest popular song on iTunes that literally plays no music.