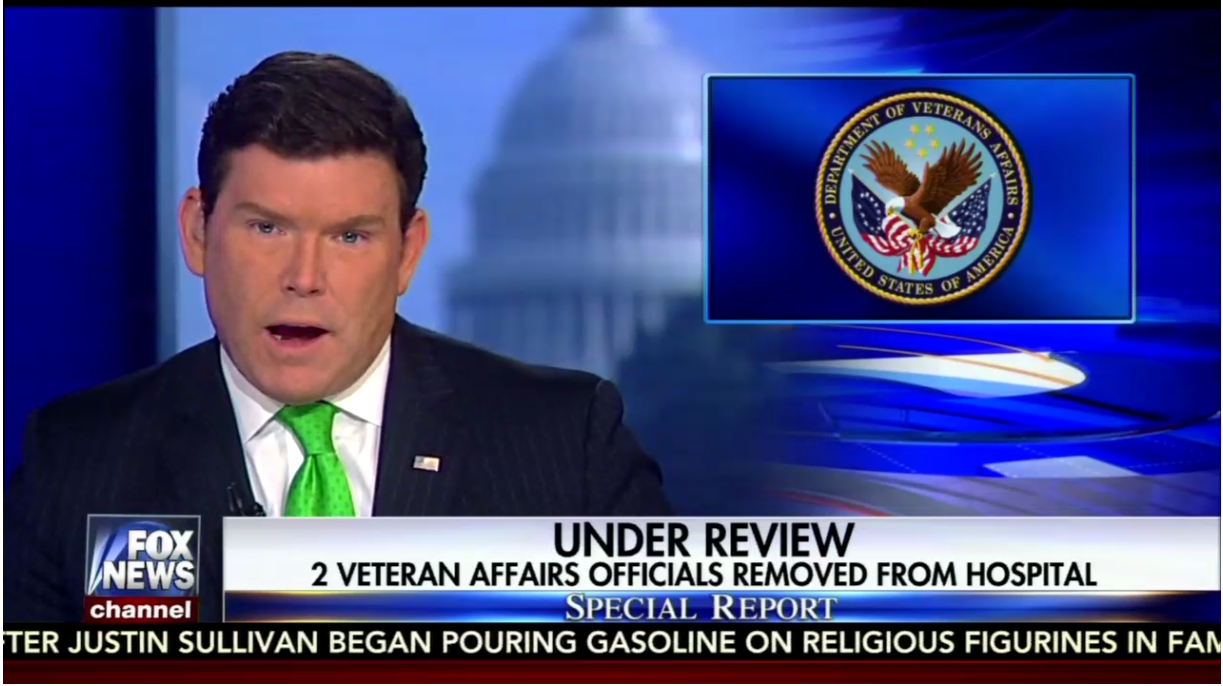 The Trump administration took swift action against two high ranking officials at the Manchester VA Medical Center in New Hampshire on Sunday. The firings came one day after The Boston Globe published a scathing expose on the atrocious conditions present at the VA hospital. But despite the horrendous conditions and the Trump administration’s decisive action, the Big Three Networks (ABC, CBS, and NBC) ignored everything.

Fox News Channel’s Bret Baier, the anchor of Special Report, was one of the few on cable news to give the story anytime at all. In a news brief on Monday he said:

President Trump's chief of Veterans Affairs has removed two top officials from New Hampshire's only veterans’ hospital. The Boston Globe reports review has been ordered for Manchester VA Medical Center. Physicians and employees say that facility was endangering patients with conditions such as a fly-invested operating room and surgical instruments that were not always sterilized.

According to The Globe, Veterans Affairs Secretary David Shulkin “removed the hospital director, Danielle Ocker, and replaced her with Alfred Montoya, the current director at the White River Junction VA in Vermont. He also removed chief of staff James Schlosser, saying he would name Schlosser’s replacement soon.”

Not only were unsanitary health conditions running rampant, but there was also gross incompetence. “The hospital ordered a $1 million nuclear medicine camera in 2015 to replace a balky one, but never installed it because it was too big for the examination room,” wrote The Globe. “Without a reliable camera, the hospital in February stopped offering nuclear stress tests for heart disease risk, and bone scans that can detect tumors.”

The Boston Globe’s expose chronicled story after story of veterans that were victims of the subpar treatment at the facility. And in a press release on Sunday, that specifically cited The Globe’s reporting, Shulkin expressed his concern:

These are serious allegations, and we want our Veterans and our staff to have confidence in the care we’re providing. I have been clear about the importance of transparency, accountability and rapidly fixing any and all problems brought to our attention, and we will do so immediately with these allegations.

The press release also stated that “the VA Office of the Medical Inspector and the VA Office of Accountability and Whistleblower Protection are being sent in beginning Monday to conduct a top-to-bottom review of the Manchester VAMC, including all allegations in the article.”

The coming reforms at the Manchester VA Medical Center are thanks to a team of “11 physicians and medical employees” who blew the whistle.

“The US Office of the Special Counsel, the whistle-blower agency, has already found a ‘substantial likelihood’ of legal violations, gross mismanagement, abuse of authority, and a danger to public health, according to a January letter to one of the doctors who alleged wrongdoing,” The Globe added.

Despite the all of the evidence of wrongdoing and effective action on the part of the Trump administration, the Big Three Networks had no interest in the story of veteran safety. Previously, the networks have turned a blind eye to Trump signing VA reform into law, and the Trump administration bringing the hammer down on a VA hospital director in Louisiana. Instead, they found the time to fawn over a dog a baby deer on Monday. Only the highest of standards for their priorities.

BRET BAIER: President Trump's chief of Veterans Affairs has removed two top officials from New Hampshire's only veterans’ hospital. The Boston Globe reports review has been ordered for Manchester VA Medical Center. Physicians and employees say that facility was endangering patients with conditions such as a fly-invested operating room and surgical instruments that were not always sterilized.