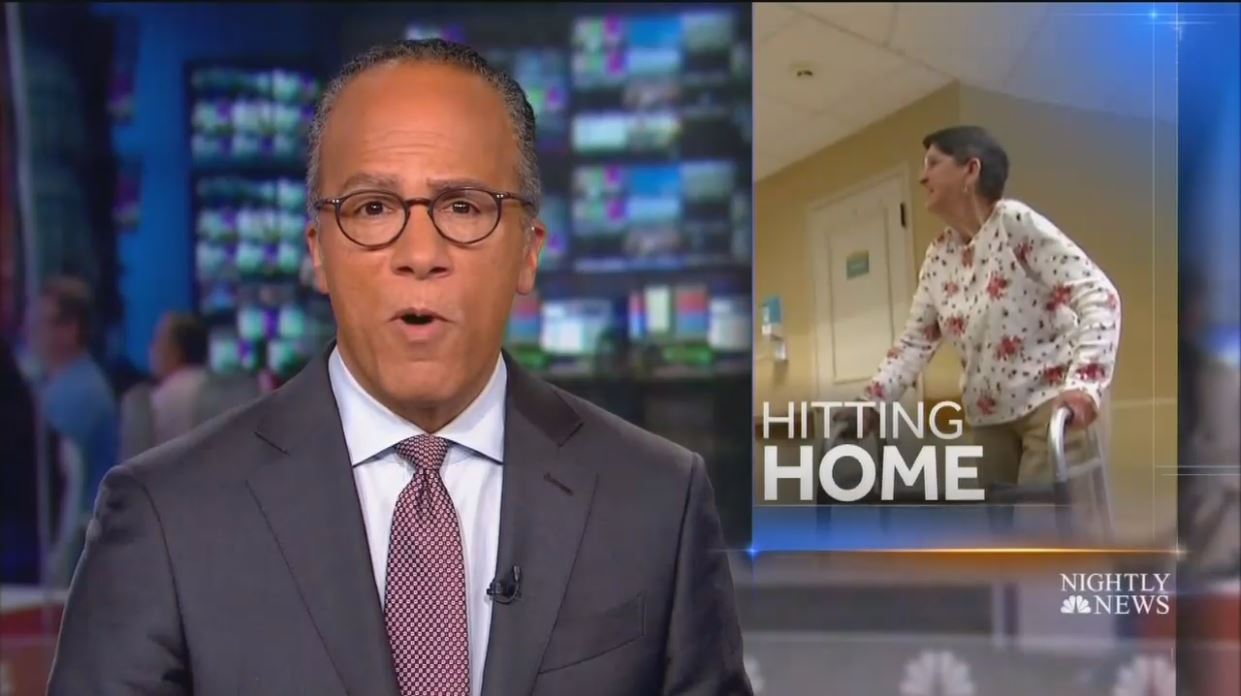 On Monday, the often inaccurate Congressional Budget Office released its report with the latest analysis of the health care bill recently released by Senate Republicans. First impressions: There was a lot for the liberal media to make hay with. In addition to running with the misleading figure of the number of uninsured, ABC and NBC both continued to push the fake news story of there being massive cuts to Medicaid in the bill during their evening broadcasts. That’s despite the fact that the CBO report itself disproves their lie.

ABC reporter Mary Bruce was hyping the opposition to the bill from left-leaning Republicans, during World News Tonight, when she made her fallacious claim about slashes to Medicaid. “Republicans can afford to lose just two votes, but already five say they cannot support their own party's bill,” she touted. “One of the biggest sticking points, the bill's plan to slash spending on Medicaid by $800 billion.”

On NBC Nightly News, Correspondent Kasie Hunt claimed that “the analysis also estimates the cuts to Medicaid will help save $321 billion over the next ten years.” That was after she read a vulgar tweet from a Democratic Senator chastising the bill. “Democratic Senator Brian Schatz tweeting, ‘CBO confirms this thing is a bleep sandwich.’”

NBC didn’t stop their smear of the Better Care Reconciliation Act at that. They disgustingly ran a report talking about how the GOP bill was going to hurt the elderly in nursing homes because of the supposed cuts to Medicaid. “And as you noted, among the proposals in the Senate health care bill are some steep cuts to Medicaid over the long term,” declared Anchor Lester Holt. “But some health care providers say the effects would be devastating to the 1.4 million Americans living in nursing homes.”

This assertion was similar to old Democratic Party attacks that insisted Congressman Paul Ryan was trying to “throw grandma off a cliff.”

Holt handed the report off to Gabe Gutierrez who was visiting a nursing home in Chicago, Illinois. “These days Jane Hale is worried,” he reported. “The 74-year-old has been living in this nursing home near Chicago for 11 years, first on private insurance, now on Medicaid.” The report was about how drastic cuts to Medicaid would leave the elderly unable to pay for their care at nursing homes.

The report ended with Hale trying to guilt Republicans, saying: “I think that the people that are trying to do the cuts ought to stop and think what if it was their mother, where would you want them to be?” Gutierrez followed up by with: “A question she hopes Washington will consider.” 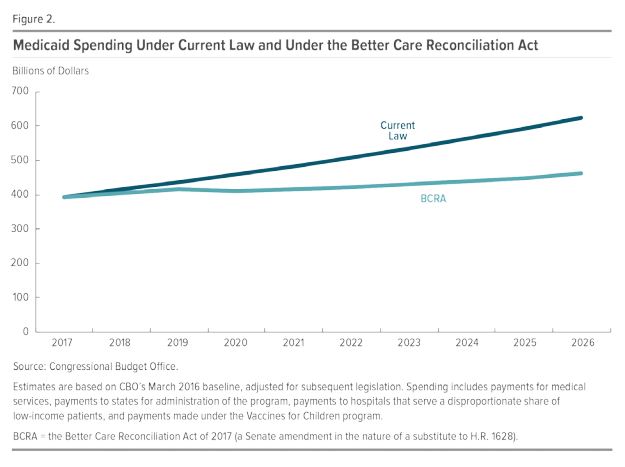 But their accusations that Medicaid was being “slashed” were false and the CBO’s own report proved it. On page 13 of the report, the CBO provided a graph (Figure 2) that depicts the projected cost of Medicaid spending over the next 10 years. The graph shows a reduction in additional spending on Medicaid but the amount still increases over the 10 year period. The graph is so simple a child could understand it. And on page 35, the report also details how the bill gives $8 billion to Medicaid and CHIP to states that spend less than their cap on the programs.

Their reporting on the 22 million that would “lose insurance” under the bill was also grossly misleading. Although the CBO failed to give a specific amount or percentage, on page four, the report does explain the drop, noting that it was “primarily because the penalty for not having insurance would be eliminated.” The Big Three Networks (CBS included) never made the distinction between those losing insurance and those rejecting the individual mandate.

The CBO had also cautioned readers that their estimates could be wildly off:

CBO and JCT have endeavored to develop budgetary estimates that are in the middle of the distribution of potential outcomes. Such estimates are inherently inexact because the ways in which federal agencies, states, insurers, employers, individuals, doctors, hospitals, and other affected parties would respond to the changes made by this legislation are all difficult to predict. In particular, predicting the overall effects of the myriad ways that states could implement waivers is especially difficult.

Is the Senate’s health care bill perfect? No. But the liberal media are stoking people’s deepest fears by concocting doomsday scenarios and not giving the bill a fair shake. They are eager to make Republicans “own the problems” with their bill when they never had Democrats “own” the failures of Obamacare, and they couldn’t be bothered to know who it was hurting.

TOM LLAMAS: And we begin with that breaking news from Capitol Hill tonight. The Senate's plan to repeal and replace ObamaCare, facing an uphill climb. Senate Majority Leader, Mitch McConnell aiming for a vote by the end of the week. The President sounding optimistic, but there is resistance from a growing number of Senators from their own party. Resistance too at town halls in protest around the country. Just today, this Die-In in Bloomington, Indiana. And tonight, the Congressional Budget Office predicting that the plan would leave millions more Americans uninsured while raising the premiums for the most vulnerable. ABC's Mary Bruce starts us off on Capitol Hill.

MARY BRUCE: Tonight, the nonpartisan Congressional Budget Office reveals the Senate health care bill would leave 22 million more Americans uninsured over the next decade. 15 million more uninsured next year alone. While some young people could see their premiums go down, according to the CBO, a 64-year-old making roughly $57,000 a year could see their annual premium rise by nearly $14,000.

BRUCE: Other Republicans will likely point to the potential savings. The deficit would plunge $321 billion by 2026. Republicans can afford to lose just two votes, but already five say they cannot support their own party's bill. Five more have voiced serious concerns. One of the biggest sticking points, the bill's plan to slash spending on Medicaid by $800 billion.

SUSAN COLLINS: I'm also very concerned about the Medicaid cuts, what it means to our most vulnerable citizens.

LESTER HOLT: There are two big stories playing out this evening that are putting key parts of the Trump agenda on the line including the U.S. Supreme Court allowing parts of the president's travel ban to go into effect for now. But we start with a major new wrinkle in the fight to win passage of a health care bill in the Senate. The independent Congressional Budget Office has crunched the numbers and the Republican plan tonight it estimates 22 million Americans could lose their health coverage over the next ten years. Already facing mounting reluctance within their own party, Republican leaders are still insisting on getting a vote this week. Our coverage starts with NBC's Kasie Hunt. 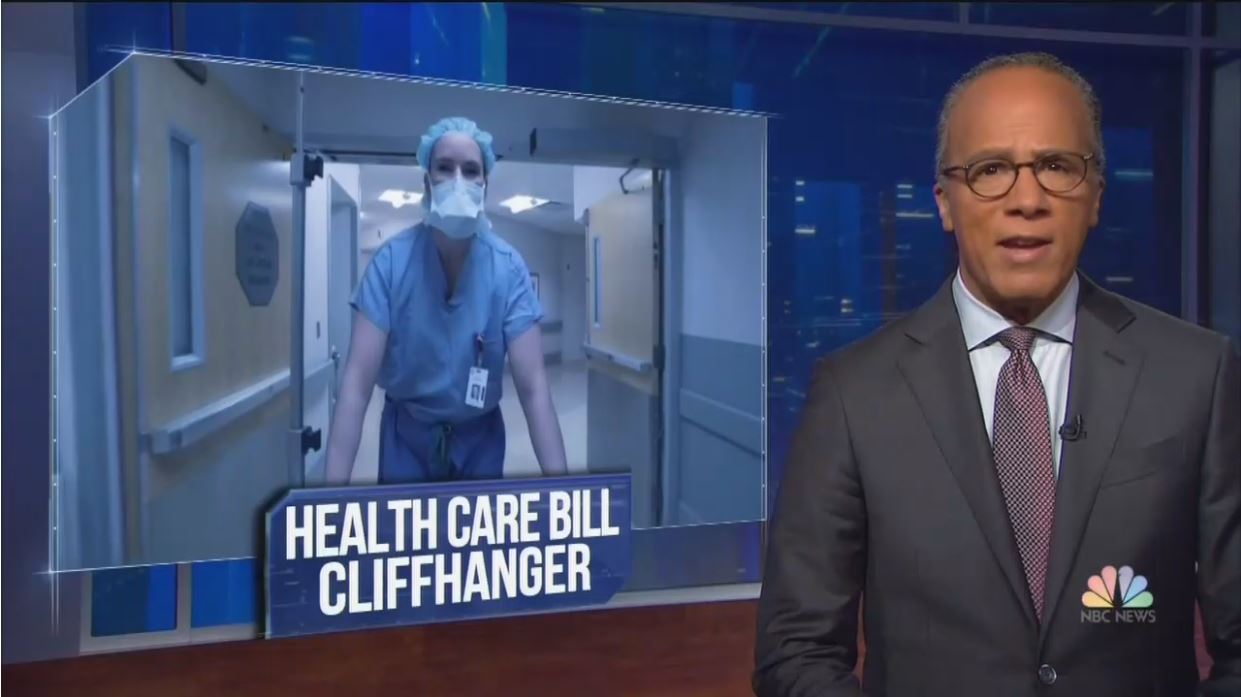 KASIE HUNT: Healthcare for 22 million people hanging in the balance. That's how many could lose coverage over the next decade over the Senate health care bill. According to the new non-partisan analysis from the Congressional Budget Office, out late today. For the Senators deciding how to vote, it's millions more uninsured than many had hoped.

HUNT: Democratic Senator Brian Schatz tweeting, “CBO confirms this thing is a bleep sandwich.” But the analysis also estimates the cuts to Medicaid will help save $321 billion over the next ten years. And that gives Senate Majority Leader Mitch McConnell more room to negotiate even as he faces protest in the ranks.

HOLT: And as you noted, among the proposals in the Senate health care bill are some steep cuts to Medicaid over the long term. Supporters say the changes are necessary to save the program. But some health care providers say the effects would be devastating to the 1.4 million Americans living in nursing homes. NBC's Gabe Gutierrez has a closer look.

JANE HALE: It's really scary because you don't know what's going to happen.

GUTIERREZ: The 74-year-old has been living in this nursing home near Chicago for 11 years, first on private insurance, now on Medicaid.

HALE: I think that the people that are trying to do the cuts ought to stop and think what if it was their mother, where would you want them to be?