In an absolutely shocking tweet late Tuesday afternoon, MSNBC’s Counter Terrorism Analyst Malcolm Nance stepped up and suggested that ISIS bomb a Trump property in Turkey. “This is my nominee for first ISIS suicide bombing of a Trump property,” he tweeted in response to another one asserting that President Trump congratulated Turkish President Recep Tayyip Erdogan’s election win for corrupt reasons tied to his tower. 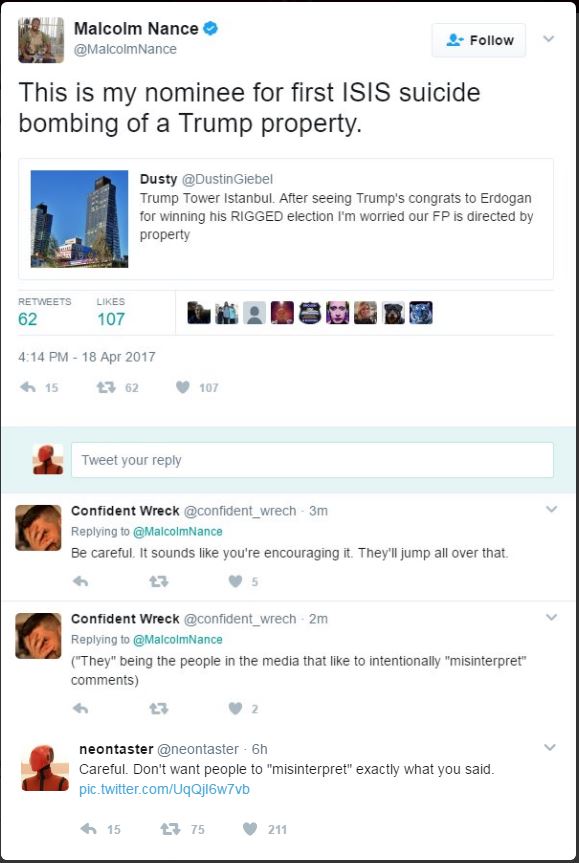 Nance has since deleted the tweet but has yet to issue an apology or a clarification.

This isn’t the first time Nance has invoked ISIS in relation to Donald Trump. During the 2016 election, he once declared that Donald Trump was the “ISIS candidate,” and claimed he was propping up the terrorist organization with his rhetoric.

And when it comes to terrorist attacks, Nance has a history of playing them down. In his commentary on the truck attack in Nice, France, Nance argued that the driver could possibly be just suffering from a mental ailment.

Nance had also downplayed the attack at the gay nightclub in Orlando, Florida. There he suggested that the attack was not linked to terrorism but Omar Mateen’s personal “psycho-sexual problem.” He also added that “San Bernardino may, in fact, have been a hybrid act of terrorism/workplace violence.”