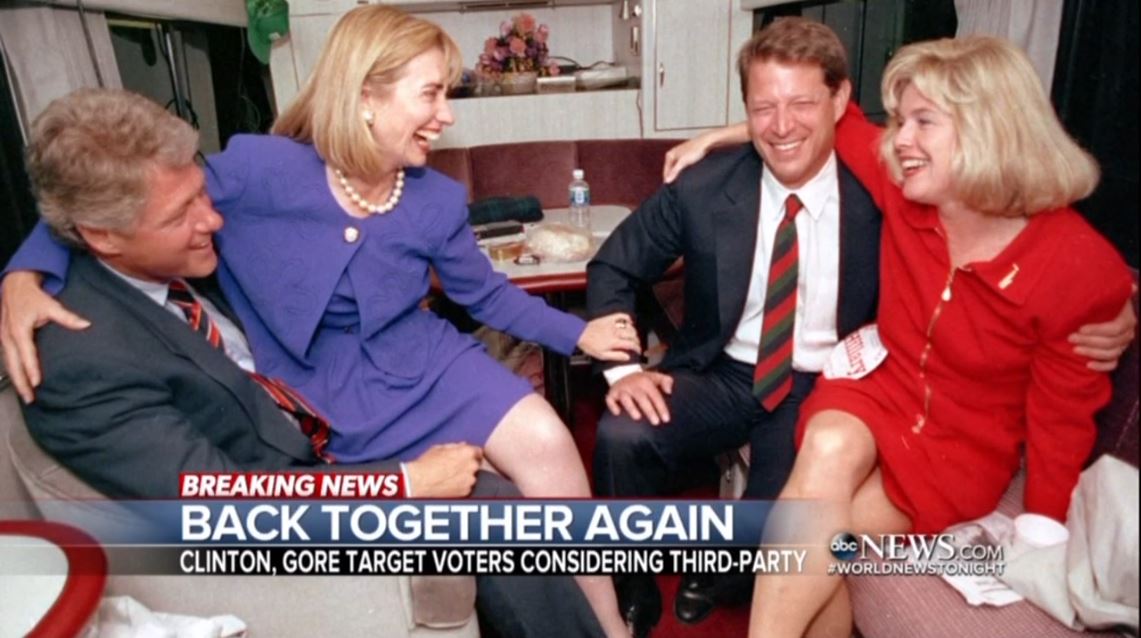 While all of the “Big Three” networks were buzzing about the ongoing “GOP civil war” Tuesday, only one wasn’t able to find the time to report the latest deluge of leaked e-mails to plague the Hillary Clinton campaign. ABC dedicated spent three minutes touting how failed presidential candidate Al Gore stumped for Clinton in Florida. “Meantime this evening, a very rare appearance, alongside Hillary Clinton tonight. Al Gore and Clinton back together again,” hyped Anchor David Muir on World News Tonight.

“Your vote really, really, really counts. A lot. You can consider me as exhibit an "A" of that truth,” Gore joked to the Florida crowd at a Clinton Rally. “Even today, the painful memory still fresh,” ABC’s Cecilia Vega noted as she played a clip of the Democratic crowd chanting “You won, you won,” a reference to Gore loss to George W. Bush in 2000. “Take it from me, your vote can make all of the difference in this election,” he continued.

According to Vega, the Clinton campaign’s strategy with tapping Gore is aimed a courting a demographic she continues to struggle with, millennials. “About 1 in 4 millennials now leaning toward a third party candidate,” Vega stated before playing a clip of President Obama scolding millennials for casting “a vote for Trump” with their support for a third party.

What ABC failed to report, but their competitors did, was the latest batch of Clinton Campaign e-mails released by WikiLeaks on Tuesday. “As [Gore] spoke, reporters were poring through a third torch of e-mails hacked from the account of Clinton Campaign Chair John Podesta,” reported Nancy Cordes on CBS Evening News, “The 1,200 e-mails posted by WikiLeaks today, bring the total since Friday to 5,000.”

Cordes even drew attention to an e-mail criticizing Clinton for her private e-mail server, “As Clinton's e-mail controversy swirled last August, think tank president Neera Tanden asked, “Why doesn't she just turn over the server to a third party at this point? Isn't it going to leak out of the FBI Anyway?"”

During Andrea Mitchell’s report on NBC Nightly News Bloomberg’s Mark Halperin shared his dire warning about future e-mail leaks, “This latest batch of documents demonstrates once again that Hillary Clinton is one disclosure away from potentially having this race flip flop once again.”

Closing out her report, Vega seemed to be trying to get out the vote. “A record number of early votes expected this year, as many as 1 in 3 people expected to cast their votes before Election Day,” she told Muir, “And Hillary Clinton and Al Gore were in this state today because the last day to register in Florida is tomorrow.”

DAVID MUIR: Meantime this evening, a very rare appearance, alongside Hillary Clinton tonight. Al Gore and Clinton back together again. Back in 1992, the Clintons and the Gores celebrating their win. The four of them were often seen campaigning together, nearly 25 years ago. And there he was today, Al Gore, who has not done many political events since his own bruising loss. ABC's Cecilia Vega on why gore decided to come out this time.

CECILIA VEGA: Tonight, Al Gore coming out of the political shadows to deliver a cautionary tale.

VEGA: Gore standing with Hillary Clinton in Florida, the scene of his 2000 election loss. 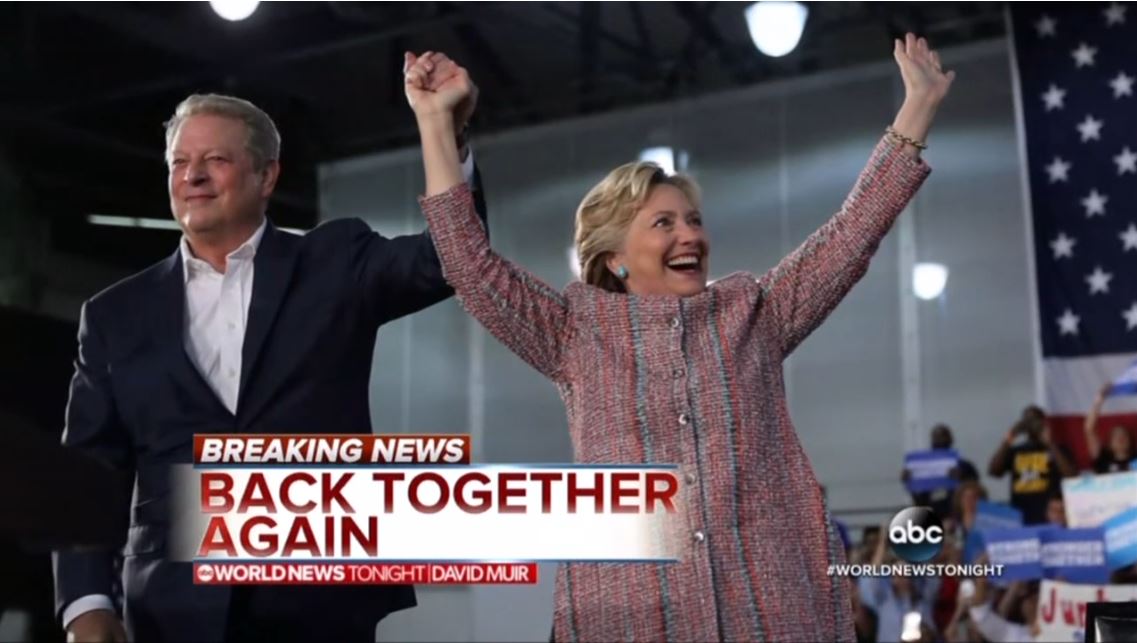 CROWD: You won, you won.

GORE: Take it from me, your vote can make all of the difference in this election.

VEGA: The Clinton/Gore relationship complicated. From the high of their 1992 win to their bitter falling out after the Monika Lewinsky scandal. When Gore ran to succeed Bill Clinton, he ran from him, too.

GORE: I stand here tonight as my own man and I want you to know me for who I truly am.

GORE: You want to do a hands up?

VEGA: About 1 in 4 millennials now leaning toward a third party candidate. President Obama recently laying it on the line.

CLINTON: I can't wait to have Al Gore advising me, when I am president of the United States.

VEGA: Clinton riding high these days, but warning supporters not to think this race is over.

MUIR: And Cecilia Vega joins us live tonight from Miami. And early voting so crucial, really for both campaigns. And the Clinton team with the Trump video in the last couple of days and her debate performances, they want to bank votes now?

VEGA: Yeah, David. Voting is already under way in a number of states. A record number of early votes expected this year, as many as 1 in 3 people expected to cast their votes before Election Day. And Hillary Clinton and Al Gore were in this state today because the last day to register in Florida is tomorrow. David? 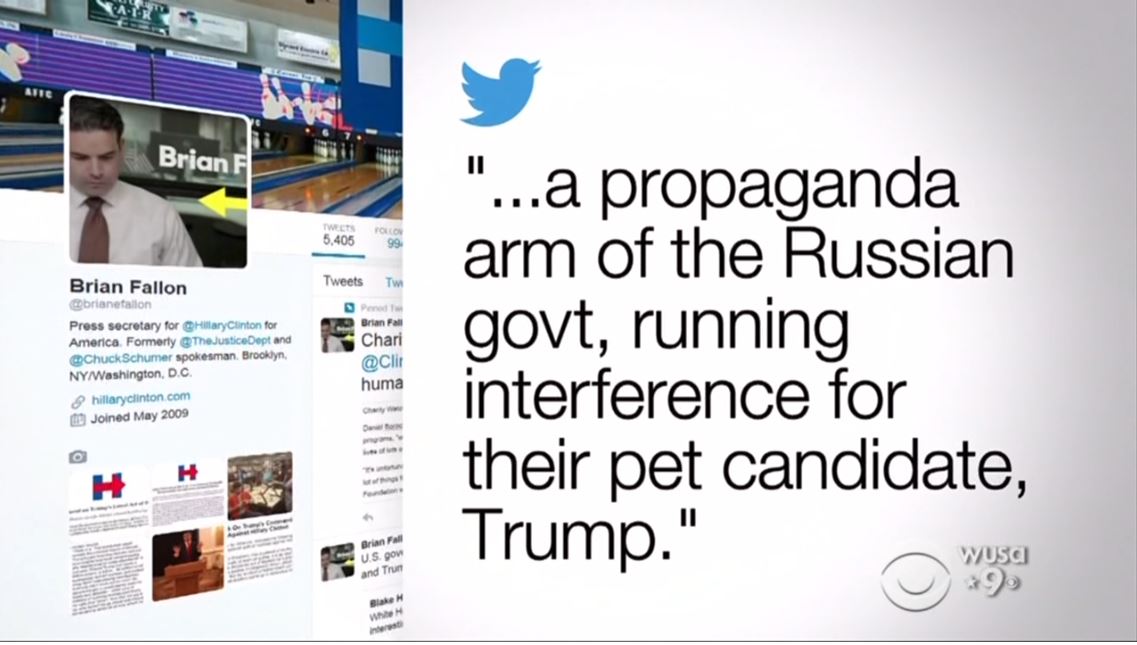 CORDES: That was one of two messages Gore was asked to deliver, especially to young voters who have been slow to warm up to can Clinton but who cite the environment as their number one issue. As he spoke, reporters were poring through a third torch of e-mails hacked from the account of Clinton campaign chair John Podesta. The 1,200 e-mails posted by WikiLeaks today, bring the total since Friday to 5,000.

Several are from supporters fretting about Clinton's tone. Starbucks' CEO Howard Schultz wrote last July that the "The campaign feels yesterday. It's too packaged and prescribed. Reboot the look of it all and the overriding message before it's too late." As Clinton's e-mail controversy swirled last August, think tank president Neera Tanden asked, “Why doesn't she just turn over the server to a third party at this point? Isn't it going to leak out of the FBI Anyway?"

Today, Clinton's press secretary called WikiLeaks, "A propaganda arm of the Russian government running interference for their pet candidate, Trump." WikiLeaks founder Julian Assange has denied the Russian connection, but US intelligence officials said last week that Russian state actors appear to be behind hackings at the DNC and other democratic groups.

Republicans called attention to one particular e-mail today in which Clinton's press secretary alerted aides that the justice department was about to release a court filing regarding Clinton's e-mails. Trump accused him of colluding with the federal government, but Clinton aides pointed out, Scott, that that information was publicly available.

MITCHELL: But all of it happening as a new batch of hacked e-mails from Clinton campaign chair John Podesta, released by WikiLeaks and not independently verified by NBC News, show Clinton was reluctant to adopt one of Gore's biggest goals, stopping the keystone pipeline. Clinton first signaling support.

CLINTON: Not yet signed off on it, but we are inclined to do so.

MITCHELL: But in 2015, with Sanders rising in the polls, Clinton aides exchanged a flurry of e-mails about how to change her position on the pipeline without it looking manufactured and very political. Weeks later responding to a voter's question, she switched her position.

BERNIE SANDERS: Therefore, I oppose it. 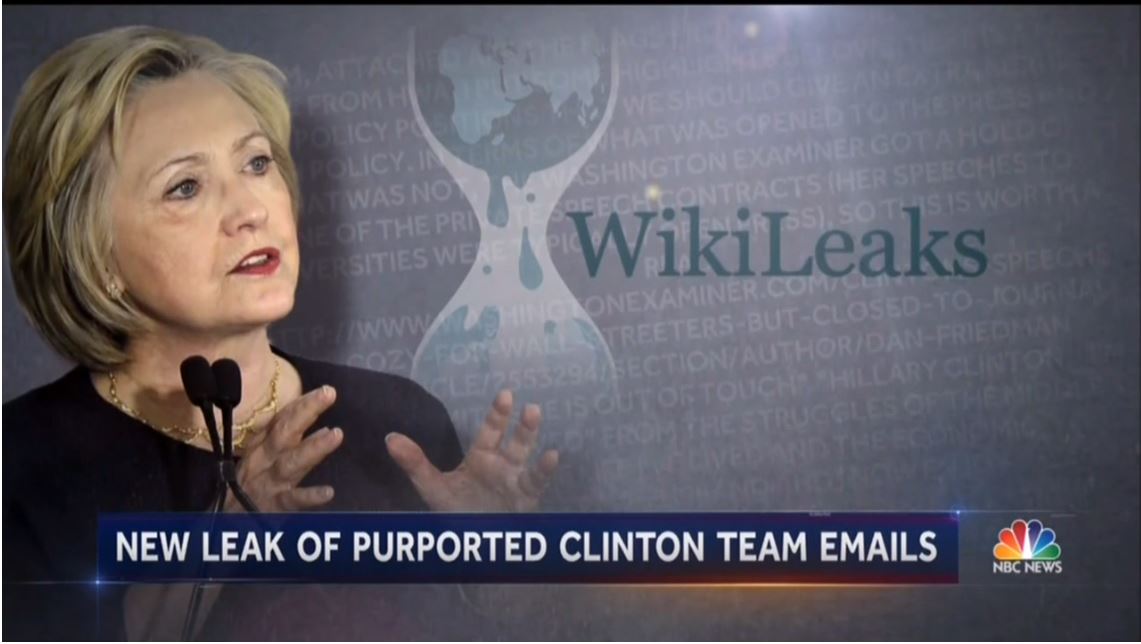 MITCHELL: Another e-mail showing contact between the Clinton campaign and the Justice Department. Clinton Press Secretary Brian Fallon writing, he was in touch with the justice department where he once worked, regarding lawsuits over Clinton's e-mails. Quote, “DOJ folks informed me there's a status hearing in the case.” The White House tonight denying any impropriety.

MARK HALPERIN: This latest batch of documents demonstrates once again that Hillary Clinton is one disclosure away from potentially having this race flip flop once again.

MITCHELL: The Clinton team blaming the leaked e-mails on what US Intelligence says is Russian hacking. Donald Trump who has had intelligence briefings on Russia's role, but denied it in Sunday's debate today tweeting, “Clinton is unfit to run because of what WikiLeaks revealed.”

Tonight Clinton getting attention for something she said to The New York Times. Saying, “I'm the only thing standing between you and the apocalypse.” She's said that before. The campaign telling us tonight, it's partly tongue in cheek, but also serious. She does think that Donald Trump is unlike any other Republican nominee. Lester?