The liberal “Big Three” networks seemed to try everything in their power to not mention Hillary Clinton’s latest e-mail controversy Wednesday. Throughout all of their news programs, both morning and evening, they gave the e-mails a total of 6 minutes 59 seconds. In stark contrast, they dragged out Trump’s “Second Amendment people” comment with a whopping 25 minutes 54 seconds of coverage. “One day after Donald Trump used the second amendment to shoot himself in the foot, Hillary Clinton used her first amendment right to speak out against him,” touted anchor Scott Pelley on CBS Evening News.

ABC’s World News Tonight had the largest disparity in coverage of the two stories Wednesday evening. The network dedicated a mere 38 seconds to the e-mail controversy, as they mixed it in with other coverage of Clinton.  “Today, the Clinton campaign saying, "Hillary Clinton never took actions as Secretary of State because of donations to the Clinton Foundation,” reported Cecilia Vega, “But Trump says the e-mails exposed pay for play connections.” ABC gave Trump’s comment 3 minutes 24 seconds that evening.

On a side note, instead of covering Clinton’s e-mail controversy ABC chose to lead the night by broadcasting the man climbing Trump Tower. They broadcasted live from the tower for 3 minutes 47 seconds, which was not included in larger time total.

NBC Nightly News gave the e-mails a tiny bit more time that ABC Wednesday evening, at 59 seconds. They too mixed it into a larger report about Clinton. Correspondent Kristen Welker played a clip of former President Bill Clinton defending the Clinton Foundation last year, “We have never done anything knowingly inappropriate in terms of taking money to influence any kind of American government policy.” “89 days until the election and Donald Trump isn't making life easy for himself,” remarked reporter Kate Tur talking about Trump’s comment. Also, NBC had finally found out that the father of the Orlando nightclub shooter attended a Clinton rally and gave the story 18 seconds. 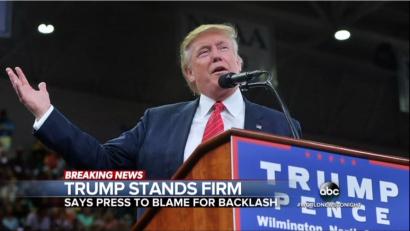 CBS had the most balanced coverage for the two topics Wednesday evening, with only eight more seconds dedicated to Trump’s comment. During his report Major Garrett seemed to scold Trump by bringing on Bayor University’s Martin Medhurst, who stated, “For a president it's even more severe, because when a president misspeaks, or is ambiguous in ways that are not intentional, he risks putting the country in great harm.”

Also not included in the total times, but offers an interesting comparison, were the numbers from Spanish-language networks Univision and Telemundo. Telemundo reported on Trump’s comment for two minutes, 42 seconds, while giving no time at all to the e-mails. In sharp contrast Univision actually gave eight more seconds to the e-mails than they did Trump’s comment, 2 minutes 28 seconds and 2 minutes 20 seconds respectively.

In addition, the “Big Three” gave almost the same about of time to the man climbing Trump Tower in their evening broadcasts (6 minutes 24 seconds), as they gave to Clinton’s e-mails in the morning and the evening combined (6 minutes 59 seconds).

SCOTT PELLEY: One day after Donald Trump used the second amendment to shoot himself in the foot, Hillary Clinton used her first amendment right to speak out against him. That's where we begin tonight, with Major Garrett.

HILLARY CLINTON: If you are running to be president, or are president of the United States, words can have tremendous consequences.

MAJOR GARRETT: That was Hillary Clinton in Iowa today, reacting to what Donald Trump said yesterday at a rally in North Carolina.

DONALD TRUMP: If she gets to pick her judges, nothing you can do folks. Although, second amendment people, maybe it there is, I don't know.

CLINTON: Yesterday, we witnessed test in a long line of casual comments from Donald Trump that cross the line.

GARRETT: Trump argued he was only talking about political advocacy.  But Secret Service felt compelled to announce it took note of Trump’s comments. The inference the violence arises in an atmosphere of suspicion that Trump helped create. On in which the GOP nominee warned supporters of abridged second amendment rights if his opponent is elected.

GARRETT: He also warns of a fraudulent November election.

TRUMP: And I'm afraid the election is going to be rigged. I have to be honest.

GARRETT: There is no proof to either charge. When it comes to the language of running for and being president, precision is key. Every word is scrutinized for obvious and hidden meaning. Martin Medhurst studies presidential rhetoric at Baylor University.

MARTIN MEDHURST: For a president it's even more severe, because when a president misspeaks, or is ambiguous in ways that are not intentional, he risks putting the country in great harm.

GARRETT: Modern US presidents have something akin to a stock phrase on this front.

BILL CLINTON: I want to be clear with you.

GEORGE W. BUSH: A message to the people of Iran is clear

BARACK OBAMA: Let me be as clear as I can be.

GARRETT: To clarify one important part of the story, the Secret Service said today it will take no formal action about Trump's comments. Scott, on twitter, Trump denied a report the agency spoke with the campaign about the matter.

SCOTT PELLEY: The State Department released e-mails today from one of Hillary Clinton's closest aides. A conservative group sued to get them, but whether the messages expose corruption or just mundane government business depends on which campaign you're listening to. Here's Nancy Cordes.

DONLAD TRUMP: Some of these were really, really bad, and illegal.

NANCY CORDES: The Trump campaign says the new e-mails show Clinton Foundation donors got special treatment at the State Department. They point to this exchange between top foundation official Doug Band, and two of Secretary Clinton’s top aides. Band reaches out in 2009 on behalf of a job seeker, writing that it is “important to take care of” this person whose name redacted.  Huma Abedin writes back assuring Band that State Department “personnel has been sending him options.”

TRUMP: It's called pay for play.

CORDES: But Clinton campaign aides says the job seeker wasn’t a donor. He was a 20-something former advance staffer to both Bill and Hillary Clinton, who had nothing to do with the foundation. And State Department spokesperson Elizabeth Trudeau says they get job referrals from outside sources all the time.

ELIZABETH TRUDEAU: It's not unusual for candidates to be recommended to the department through a variety of avenues.

CORDES: In the second exchange, Band is looking to put a billionaire foundation donor in contact with State officials, writing, "We need Gilbert Chagoury to speak to the substance person regarding Lebanon." Abedin responds, "It's Jeff Feltman,” the Ambassador, “I’m sure he knows him. I'll talk to Jeff."

MIKE PENCE: Favors were done by State Department officials for foreign donors to the Clinton Foundation.

CORDES: Clinton aides insist the well-connected Chagoury wasn’t looking for a favor, but that he had information about Lebanon that he wanted to share.

The Clinton campaign argues Trump is hyping underwhelming e-mails to distract from her growing list of Republican endorsements. Just today Scott, her campaign unveiled a formal coalition of 50 current and former GOP officials who say they’ll work together to win over other Republicans.