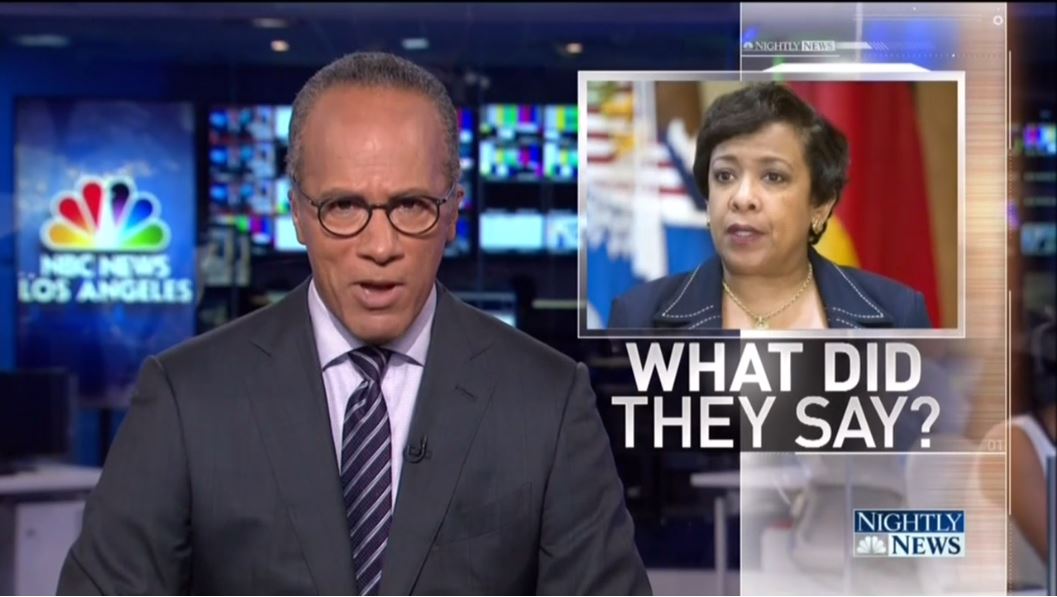 On Thursday, the ABC and NBC evening newscasts finally found the time to report on the secret meeting between former President Bill Clinton and Attorney General Loretta Lynch, after omitting it Wednesday night and Thursday morning. However, both broadcasts tried to play the encounter off as harmless with nothing to worry about. “Aides to Bill Clinton and Lynch say it was a chance meeting, and they were simply exchanging pleasantries,” reported ABC’s Tom Llamas on World News Tonight, “The conversation, she insists, all personal, no business.”

Clinton fan girl Andrea Mitchell made the pair’s argument for them on NBC’s Nightly News:

They run into each other on the tarmac at the airport. It's 108 degrees so they board her air-conditioned government plane along with her husband and visit for 30 minutes … Lynch saying it was social about golf, grandchildren and visits each had paid to former Attorney General Janet Reno who is ailing.

Both whined that Donald Trump used the meeting to “pounce” on Clinton and Lynch. “Tonight, Donald Trump accusing Attorney General Loretta lynch of an ethical breach after she met with President Bill Clinton on the tarmac of a Phoenix airport for 30 minutes,” Llamas said.

They also argued that the real problem with the situation was the “optics” of it.” “The optics of the chance meeting causing an uproar because it comes at a time when the Justice Department is looking into Hillary Clinton's use of a private e-mail server,” said anchor Lester Holt leading into the segment.

CECILIA VEGA: And next, to the race for the White House, Donald Trump revealing a new detail about how he would take on ISIS, saying he prefers to keep his plans secret from the enemy. But he does want NATO to play a much bigger role. Also tonight, why Trump is targeting Bill Clinton. ABC's Tom Llamas, one-on-one with the candidate today. 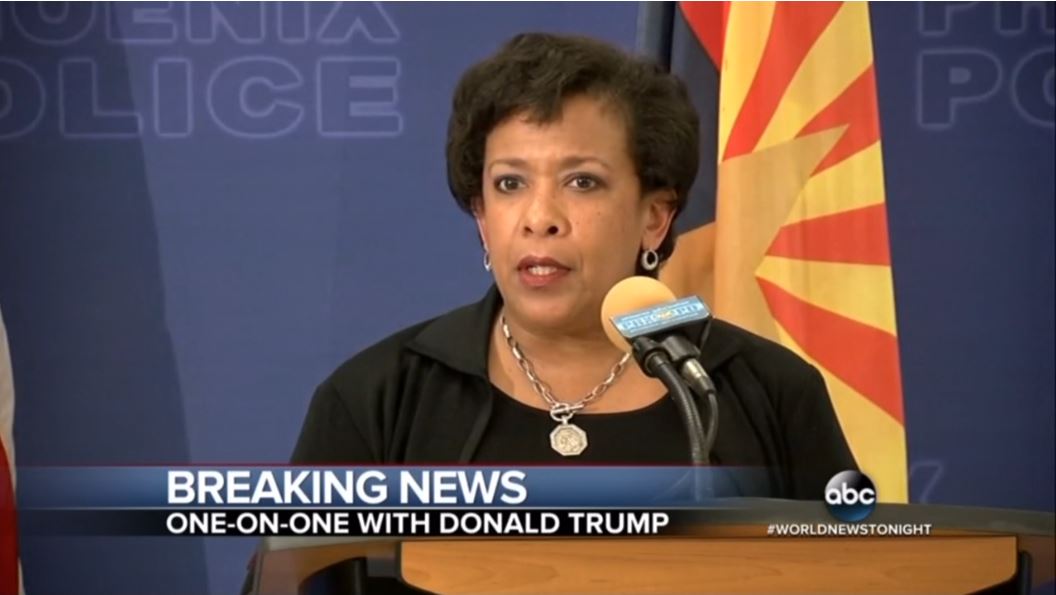 TOM LLAMAS: Tonight, Donald Trump accusing Attorney General Loretta lynch of an ethical breach after she met with President Bill Clinton on the tarmac of a Phoenix airport for 30 minutes. Lynch's Justice Department still investigating Hillary Clinton's use of a private e-mail account.

DONALD TRUMP: Who would think that when you have this massive investigation going on on e-mails, which is so serious, they'd have a meeting like this? So, I was very surprised.

LLAMAS: Aides to Bill Clinton and Lynch say it was a chance meeting, and they were simply exchanging pleasantries.

LORETTA LYNCH: Our conversation was a great deal about his grandchildren. It was primary social and about our travels. He mentioned the golf he played in Phoenix.

LLAMAS: The conversation, she insists, all personal, no business.

LLAMAS: I asked Trump about that in New Hampshire today. Do you take President Clinton at his word that that meeting was to be polite, that it was sincere, just to say hello?

TRUMP: Well, when you meet for a half hour and you're talking about your grandchildren and a little bit about golf, I don't know. It sounds like a long meeting. It was a very sad situation to see, Tom, that I can tell you.

LESTER HOLT: There is more controversy tonight not on the campaign trail but on the tarmac in Arizona. The former President of the United States, Bill Clinton, bumping into the current Attorney General of the United States, Loretta Lynch. The two talking for a few minutes. The optics of the chance meeting causing an uproar because it comes at a time when the Justice Department is looking into Hillary Clinton's use of a private e-mail server. NBC's Andrea Mitchell has details.

ANDREA MITCHELL: Bill Clinton on a campaign trip in Arizona. Attorney General Loretta Lynch visiting the Phoenix police. They run into each other on the tarmac at the airport. It's 108 degrees so they board her air-conditioned government plane along with her husband and visit for 30 minutes.

MITCHELL: Lynch saying it was social about golf, grandchildren and visits each had paid to former Attorney General Janet Reno who is ailing. But with the Justice Department investigating Hillary Clinton's e-mails, on radio today Donald Trump pounced.

MITCHELL: The attorney general says the e-mail investigation is being handled by career agents who follow the facts and the law. But critics, even some Democrats, say it could raise suspicions.

David Axelrod tweeting, “I take Loretta lynch and Bill Clinton at their word that their convo in Phoenix didn't touch on probe, but foolish to create such optics.” The president not answering a question about it late today.

BARACK OBAMA: Thank you very much

JORGE RAMOS, ANCHOR, UNIVISION: Coinciding with the investigation about the emails of Hillary Clinton, the Attorney General, Loretta Lynch, and ex-President Bill Clinton held a meeting that has generated criticism. The Attorney General said to the press that during the meeting there was no discussion about any specific case, Lourdes Meluzá explains to us why some think that both of them acted in an inappropriate manner.

LOURDES MELUZÁ, CORRESPONDENT, UNIVISION: Ex-President Bill Clinton met for a half hour with Attorney General Loretta Lynch in her private jet when both met in the airport of Phoenix, Arizona. This happens as the Department of Justice investigates the private emails of his wife, Hillary Clinton, when she was Secretary of State. The debate is over whether they acted inappropriately. 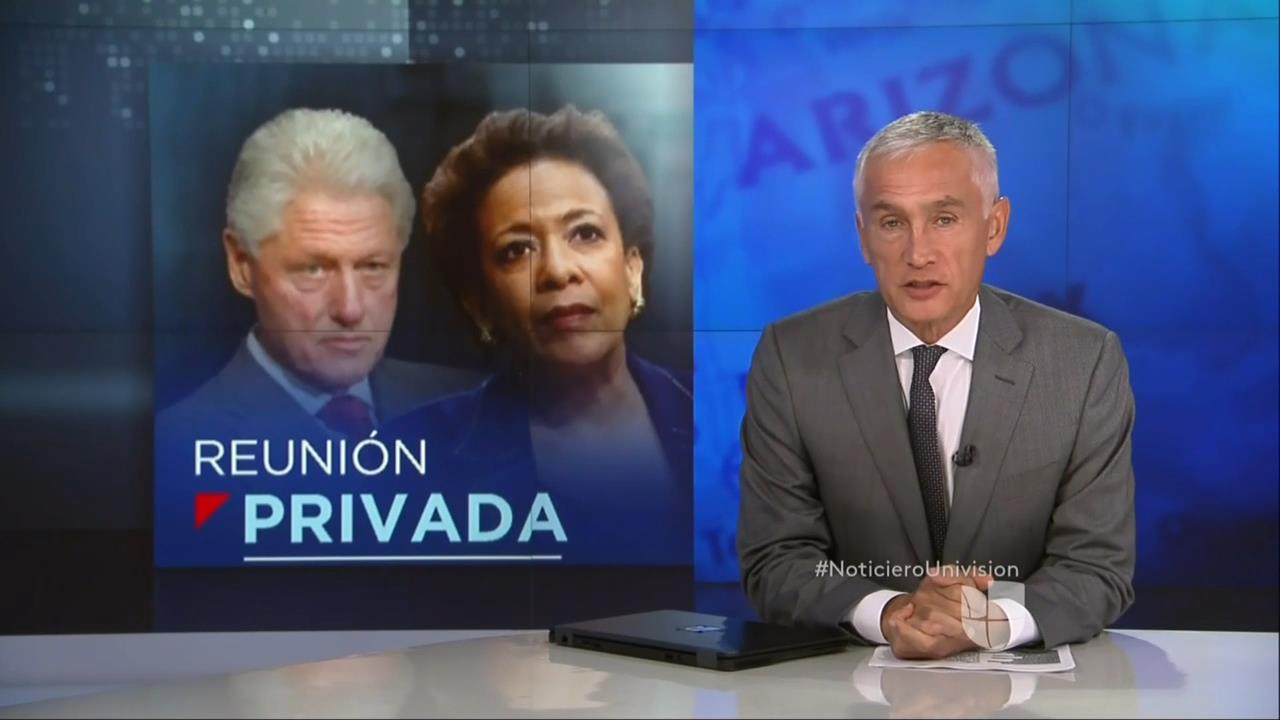 LORETTA LYNCH, ATTORNEY GENERAL OF THE UNITED STATES: [In English] Um, our conversation was a great deal about…

LOURDES MELUZÁ, CORRESPONDENT, UNIVISION: [Translating Loretta Lynch’s remarks] “Our conversation was a great deal about his grandkids, mainly social and centered on our trips.” She reassured that they didn’t talk about Clinton’s controversial e-mails nor Benghazi.

JASON POBLETE, REPUBLICAN ANALYST: Look as a lawyer, we know that sometimes the appearance of impropriety can be worse than an actual conflict [of interest].

LOURDES MELUZÁ, CORRESPONDENT, UNIVISION: He adds that under the law, people with personal interests in a case should not have contact [with investigators].

JASON POBLETE, REPUBLICAN ANALYST: The ex-President meets with her for a half hour knowing this, and in my opinion, trying to undermine the law.

LOURDES MELUZÁ, CORRESPONDENT, UNIVISION: Both understood that they could not touch on delicate subjects, he said.

JOSÉ PARRA, DEMOCRAT ANALYST: Especially in an area where it is easy to see them. Now optics is perhaps something they should have considered, that even if we are talking about family, maybe it would be best to do it another time.

LOURDES MELUZÁ, CORRESPONDENT, UNIVISION: Attorney General Lynch said that the investigation into the emails of the ex-Secretary of State is being conducted by career investigators and agents that always follow the law. The conclusion of the FBI investigation is coming soon.