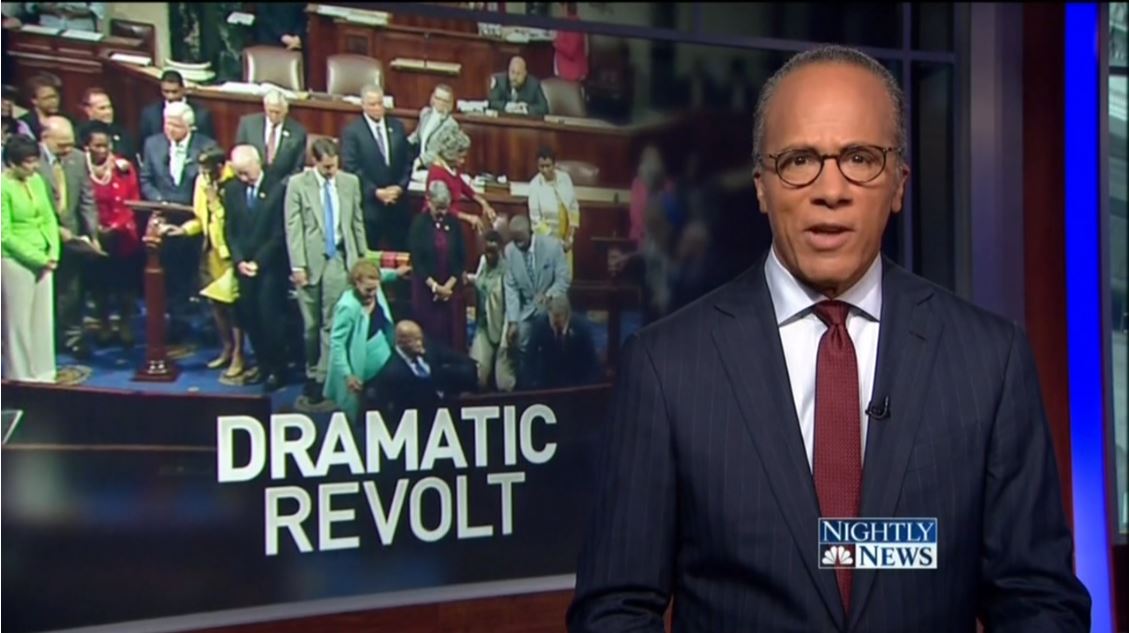 On Wednesday, House Democrats staged a sit-it on the House floor trying bring their failed Senate bills to a vote in the House. Many are calling their actions a publicity stunt, and they seem to be right. All three of the liberal networks were glued to Capitol Hill during their evening broadcasts. “The dramatic sit-in on Capitol Hill,” ABC’s David Muir touted on World News Tonight, “Sitting down, demanding action on gun control.” The sit-in also gave them the opportunity to trash House Republicans.

“And as funerals continue for the 49 who were murdered, Democrats today seized the floor of the House of Representatives, demanding that the Republican majority allow a vote on gun control,” stated CBS’ Scott Pelley on Evening News, trying to shame the opposition.

The sit-in is being led by Representative John Lewis who had participated in many sit-ins during the fight for civil rights. The networks were eager to link the fight for equality with their current push for gun-control. “It was Congressman John Lewis, who famously led sit-ins in the segregated south, who started today's sit-in on the House floor,” praised ABC’s Jon Karl. NBC’s Peter Alexander interviewed Lewis:

LEWIS: We're fighting for the rights of people to live without fear for gun violence.

When the sit-in started the House went into recess since no business was able to be conducted. And in accordance with the rules of body, when no official business is being conducted, the cameras were shut off. Such rules are in place and followed no matter which party is in the majority, but that didn’t stop the liberal media from painting House Republicans as the villains.

Alexander declared it was a sign of their weakness, “Republicans in retreat, forced to go into recess, cameras showing the protest turned off. Those cameras controlled by the Republican House Speaker.” Then NBC continued to throw praise to the Democrats, “Democrats in rebellion taking to social media to broadcast their message, violating House rules.”

They also whined that the Senate’s recent votes on proposals related to gun-control had gone nowhere. Their reports failed to mention that two of the bills were written by Republicans and voted down by Democrats. They also failed to report that Senate members agreed to set the needed vote totals to 60, which both sides knew they couldn’t reach, effectively sabotaging their bills.

DAVID MUIR: In the meantime now, to the other headline we're following right now. The dramatic sit-in on Capitol Hill. Some members of Congress suddenly staging a protest on the floor of the House. Sitting down, demanding action on gun control. They are still sitting there tonight. Long-time civil rights icon, Congressman John Lewis, saying this is about the right to vote on this. President Obama thanking Congressman Lewis today, but here's the question. Will there be a vote? What Republican House Speaker Paul Ryan said just moments ago. ABC's Jonathan Karl on Capitol Hill tonight.

JON KARL: It's something we've just never seen before, members of congress staging a sit-in like a bunch of protesters on a college campus.

JOHN LEWIS: We are blind to a crisis. Mr. Speaker, where is the heart of this body? Where is our soul?

KARL: It was Congressman John Lewis, who famously led sit-ins in the segregated south, who started today's sit-in on the House floor. Dozens of Democrats vowing to stay as long as long as it takes to get a vote on guns. The president weighed in, too.

BARACK OBAMA: If we're going to raise our kids in a safer, more loving world, we need to speak up for it. 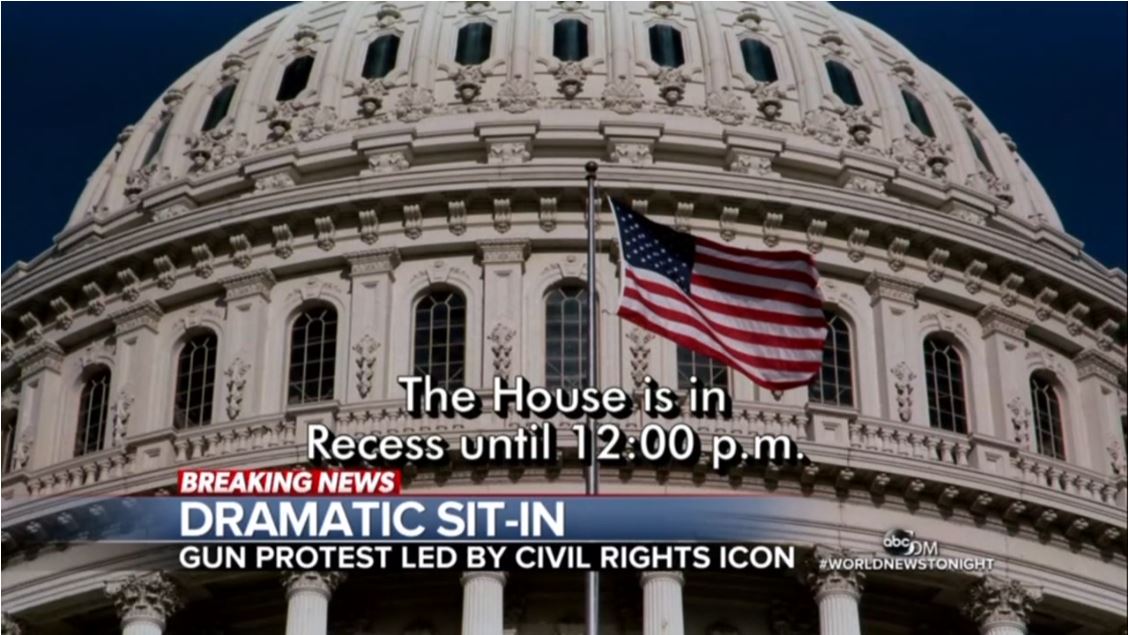 KARL: The move incensed Republicans who turned off the cameras and declared a breach of the rules. But that didn't stop the protesting members of Congress, who started broadcasting themselves with their cell phones. The Speaker of the House calling it a publicity stunt.

PAUL RYAN: This is nothing more than a publicity stunt.

KARL: Since the anguish of Orlando, there have been pleas for some kind of gun legislation. This mother making her case to congress, posting a picture of her 3-year-old practicing a preschool lockdown, saying this is the future.

But gun rights advocates say the proposed bills won't do any good and violate the second amendment. The battle is growing tonight. Democratic Senators joining in, too. Including Elizabeth Warren and fresh off the campaign trail, Bernie Sanders stopping by.

MUIR: All right, let's get right to live to Jon Karl on Capitol Hill tonight. And Jon, there are several hours in now, they say they have no intention of leaving, but will this actually force House Speaker Paul Ryan into bringing a vote on this?

KARL: Ryan just spoke a few minutes ago, he said he is absolutely not budging. He points out that the bills that they are demanding votes on have already failed in the Senate but David, those protesters show no sign of leaving. In fact, we just saw them bringing in blankets and pillows, apparently ready to go through the night.

MUIR: Alright, a long night ahead for you, as well, job Karl. Thank you.

SCOTT PELLEY: Tonight, 18 of the 53 wounded in Orlando remain in the hospital, three in critical condition. And as funerals continue for the 49 who were murdered, Democrats today seized the floor of the House of Representatives, demanding that the Republican majority allow a vote on gun control. Julianna Goldman is on Capitol Hill.

JOHN LEWIS: The time for silence and patience is long gone.

JULIANNA GOLDMAN: Veteran civil rights activist Congressman John Lewis led the more than 100 Democrats flowing in and out of the House chamber throughout the day.

LEWIS: We're calling on the leadership of the House to bring commonsense gun control legislation to the House floor. Give us a vote!

GOLDMAN: Republicans tried to begin the day's agenda around noon, but with Democrats refusing to cede the floor, instead they declared a recess. 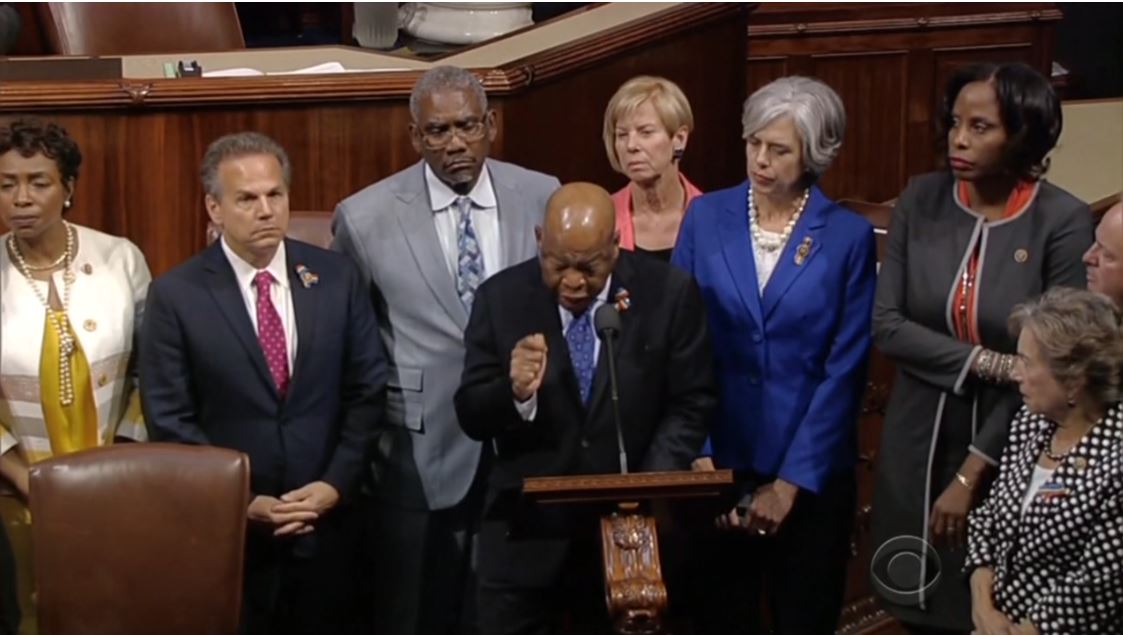 UNIDENTIFIED REPRESENTATIVE: Shut the mics off, shut the cameras off, but they're not going to shut us off.

GOLDMAN: Shutting off the cameras and microphones leaving the members to stream the sit-in on to social media from their iPhones. In shows of solidarity some Senate Democrats brought over snacks. Majority leader Harry Reid, Elizabeth Warren, and Chris Murphy walked over to the House chamber.

CHRIS MURPHY: I hope they stay there as long as it takes.

GOLDMAN: Murphy led a nearly 15-hour filibuster last week demanding that Senate Republican leaders allow votes on gun control. They did, and all of the measures failed. Today a spokesperson for House Speaker Paul Ryan said, “the House cannot operate without members following the rules of the institution." Lewis said history has shown otherwise.

LEWIS: Sometimes you have to turn things upside down to set them right side up.

GOLDMAN: Congress is set to leave Friday for its July 4 recess. Scott, House Democrats say they're prepared to stay here for as long as it takes to get a vote.

LESTER HOLT: Good evening. We have seen political standoffs of all kinds in Washington, but nothing like what is playing out right now in the chambers of the House of Representatives. An old-fashioned sit-in led by a civil rights icon. Democratic representatives literally occupying the house floor, refusing to budge until a gun-control bill is brought up for debate. Social media continuing to provide images of the revolt, even after House-controlled TV cameras were ordered turned off. NBC's Peter Alexander is at the capitol right now with the latest.

JOHN LEWIS: Not next year, but now! Today!

PETER ALEXANDER: An unprecedented demonstration, dozens of Democrats today calling for a vote on gun control.

JOHN LARSON: [Omitted that he said “rise up Democrats” first] Rise up, Americans. This cannot stand. We will occupy this floor.

UNIDENTIFIED: The House will be in order. 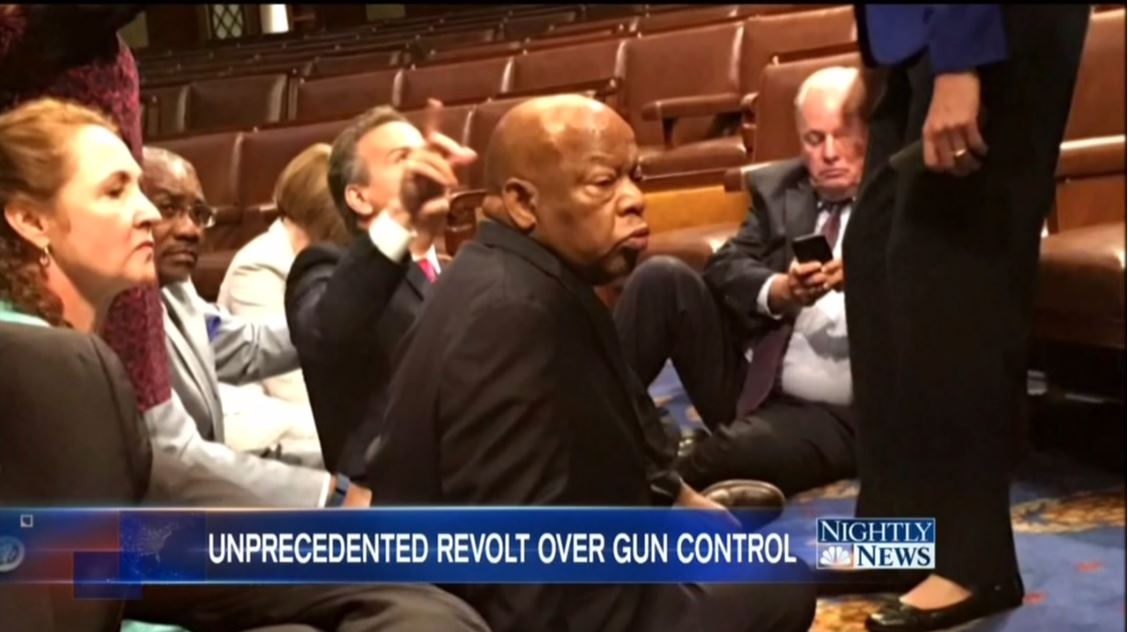 ALEXANDER: Republicans in retreat, forced to go into recess, cameras showing the protest turned off. Those cameras controlled by the Republican House Speaker. Democrats in rebellion taking to social media to broadcast their message, violating House rules.

UNIDENTIFIED: They will not silence our voice.

LEWIS: We're fighting for the rights of people to live without fear for gun violence.

ALEXANDER: The president punctuating the point, thanking Lewis for his leadership. As word spread, the chorus grew. Democrat Keith Ellison abruptly leaving a meeting after receiving this note, “Your mom called and wants you on the floor.”

Democrats commandeering the chamber for hours, joined by Senate colleagues days after their filibuster forced a gun vote, all of which failed. Today's rallying cry, “no bill, no break.” Their demand, Speaker Paul Ryan keep lawmakers working through next week's planned recess, until the House votes on background checks and a no fly, no buy bill. Blocking gun sales to suspected terrorists. Republicans balking.

KEVIN CRAMER: I, frankly, don't mind voting every day against a bill that would take away second amendment rights from folks.

PAUL RYAN: This isn't trying to come up with a solution to a problem, this is trying to get attention.

ALEXANDER: I just left the House chamber where Democrats are still holding court at this hour. Paul Ryan's office said no votes are scheduled. Democrats insist they'll stay as long as it takes. Although Lester, it’s unclear how the stalemate over guns ends.