On CBS’s Evening News it was more of the same from reporter Dean Reynolds, “In Congress, Senator Patrick[sic] Murphy launched a filibuster to force a vote on gun control legislation.” But Reynolds went even farther by brushed off concerns of upholding due-process for American citizens, claiming the numbers were too small to care about:

Some in Congress worry that law-abiding citizens on the list by mistake would be blocked from buying protection. And, yet, of 323 million Americans, there are just 25,000 on the watch list, and 6400 on the no-fly list, so cases of mistaken identity would involve a small portion of the population.

Their praise for Democratic filibusters follows a long pattern for the liberal media. When liberal Texas State Senator Wendy Davis filibustered over abortion they praised her as a “political star” and “Texan of the Year.” In contrast the networks slammed Senator Ted Cruz’s as a “long-winded protest,” with NBC’s David Gregory declaring Cruz hadn’t “moved anyone.” And when it came to Senator Rand Paul’s filibuster for clarification on the US’s protocols on drone strikes in America on Americans, ABC couldn’t be bothered to explain it properly.

In addition, neither ABC nor Spanish-language networks Univision and Telemundo ran a report on Murphy’s filibuster.

LESTER HOLT: And this, the deadliest mass shooting in US history continues to have a ripple effect in Washington. Drawing calls among Democrats, and now some Republicans for new gun control measures, including Donald Trump who says he plans to meet with the NRA. NBC's Peter Alexander has details. 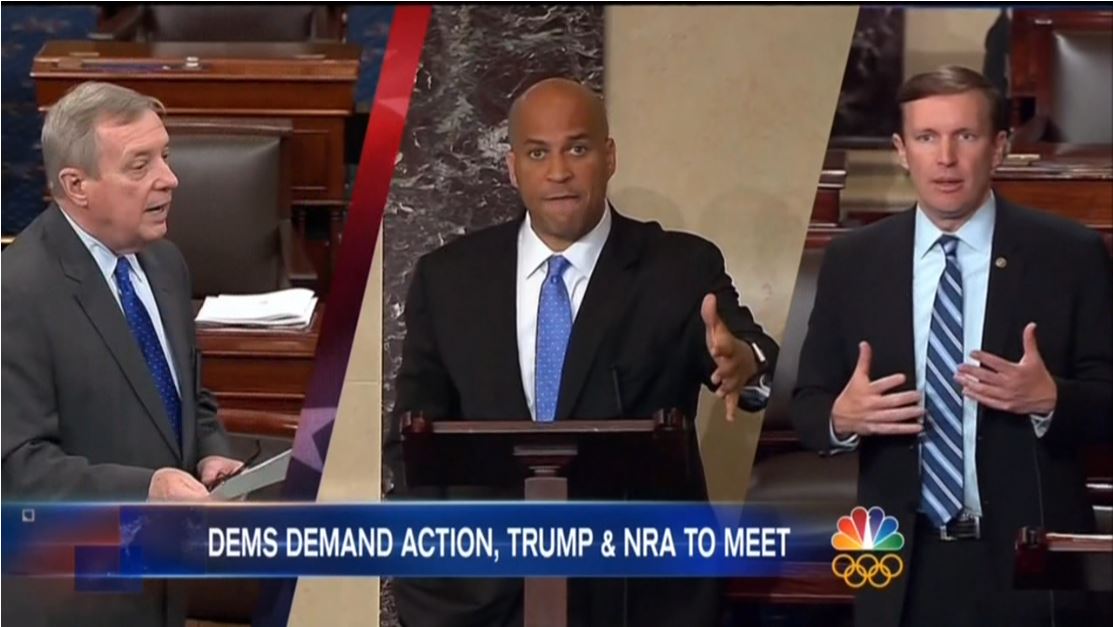 PETER ALEXANDER: In the wake of the Orlando massacre, a filibuster fueled by frustration.

CHRIS MURPHY: I'll remain on this floor until we get some signal, some sign that we can come together –

ALEXANDER: Donald Trump after meeting Tuesday with the head of the NRA, wading into the debate.

DONALD TRUMP: I'm going to save your second amendment.

ALEXANDER: Trump signaling an openness to new restrictions that would ban people on the terrorist watch list or no-fly list from buying guns. On that, Americans widely agree, but how to get it done remains the source of a fierce debate.

Just one day after the San Bernardino mass shooting last December, 54 senators, including all but one Republican, rejected a bill to block suspected terrorists from legally buying guns. The NRA's opposition centers around due process. Protecting the constitutional rights of people wrongly put on a watch list. But new signs the tide may be shifting. The most vulnerable Senate Republicans fighting for reelection appearing to moderate their tone.

PAT TOOMEY: Let's get to work here. Let's sit down together and figure out how we achieve this.

ALEXANDER: Senator Pat Toomey said to be working on a compromise with New York City Mayor Michael Bloomberg's gun control group. Those impacted most tried to keep the pressure on. The White House today screening the documentary Newtown with a handful of Sandy Hook families.

UNIDENTIFIED VOICE FROM THE FILM: I knew the school was going to be torn down. I had to see it before it was gone forever.

ALEXANDER: A new Democratic proposal would not only ban those on a terror watch list from buying guns, but add new restrictions for people like the Orlando shooter who had been investigated for terror ties within the last five years. Peter Alexander, NBC News, Washington.

SCOTT PELLEY: The FBI had investigated the killer for possible ties to terrorism. Omar Mateen was on the terror watch list until the FBI cleared him. It seems hard to justify, but people on that terror list are still allowed to buy weapons, and that has set off a debate that Dean Reynolds is covering. 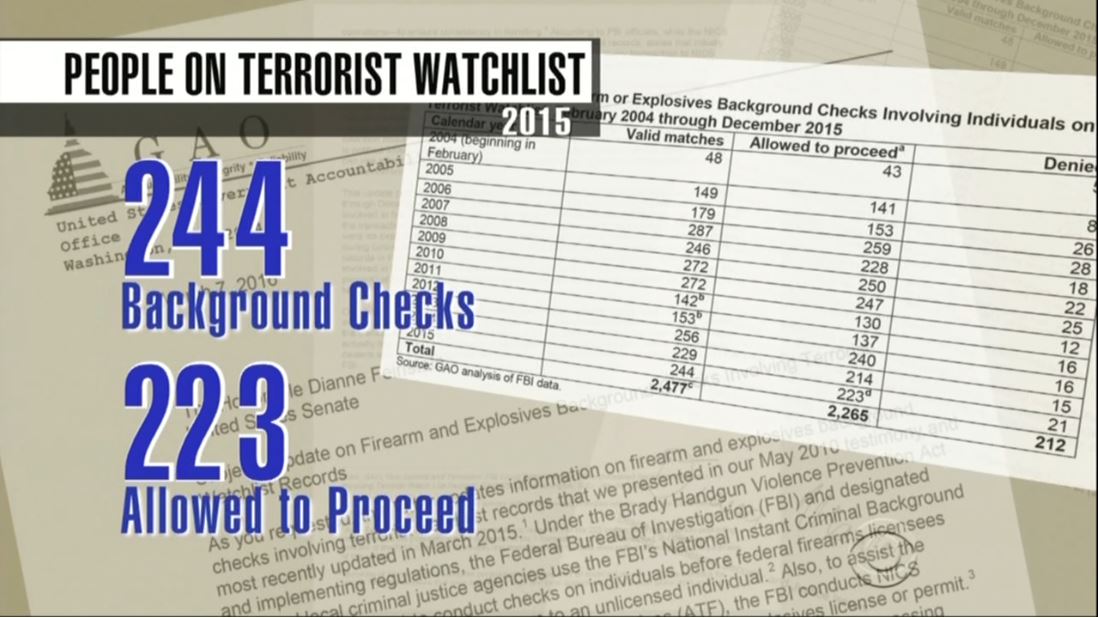 REYNOLDS: And Donald Trump tweeted that when he next meets with the National rifle Association, he'll talk about "Not allowing people on the terrorist watch list or the no-fly list to buy guns." In Congress, Senator Patrick[sic] Murphy launched a filibuster to force a vote on gun control legislation.

REYNOLDS: Some in Congress worry that law-abiding citizens on the list by mistake would be blocked from buying protection. And, yet, of 323 million Americans, there are just 25,000 on the watch list, and 6400 on the no-fly list, so cases of mistaken identity would involve a small portion of the population.

But there is another concern, Scott, voiced by FBI Director James Comey, and it is that if a suspected terrorist is blocked from buying a weapon, it might tip him off that the FBI Is on his trail.