It has been long speculated that the hosts of MSNBC’s Morning Joe, Joe Scarborough and Mika Brzezinski, were too buddy-buddy with GOP front runner Donald Trump. There are even accounts of the hosts visiting Trump’s hotel room to watch the New Hampshire primary results come in. Newly leaked hot mic audio, from the recent town hall event the two hosted for Trump, made its way to the airwaves via the Le Show radio program Sunday. The audio clearly shows the overly-friendly relationship the two have with the real estate mogul.

Throughout the over seven minute long audio clip the three can be heard conversing about the success of the Trump campaign, favorable poll results, his debate performances, and how he is going to win South Carolina and Nevada. Mika can be heard gushing over how Trump brought two of his supported on stage to speak, something she refers to has a “kind of wow moment” for his campaign. “Yeah that was great” Trump says. “We played it several times this morning.” Joe admits. 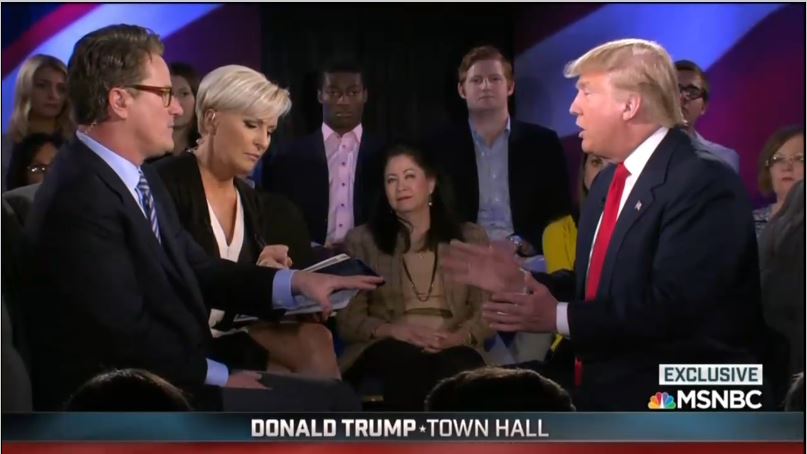 The presidental candidate even asks for their opinions about his campaign. Asking the two what they thought about the attack ads in South Carolina and whether or not they think they’re “catching on.” Joe is heard praising how well Trump’s poll numbers match so closely to the voting results in New Hampshire. “In primary states, look how close New Hampshire was. The polls were almost identical. You can take a mix of these polls and you can overlay it.” Joe said. Trump and Joe can also be heard joking and talking about how often Trump golfs while on the campaign trail, while also bashing Nevada for being a caucus state.

TRUMP: The polls are great. Except for caucus because they change their mind.

SCARBOROUGH: Except for caucus. Caucuses, they should get rid of them.

The trio spends some time laughing and talking about they recently made headlines together when Trump answered word association lines from Mika about his fellow candidates. During that segment the hosts let Trump freely bash his opponents. They all agreed that what really made the news was when Trump called Hillary Clinton “evil.”

The audio is now catching fire with the hosts and MSNBC drawing new criticism from other media networks and journalist who find it inappropriate. While being extreamly friendly with Donald Trump, Joe Scarborough is known for his vicious attacks against Ted Cruz and Marco Rubio the mogul's biggest rivals. MSNBC has refused to comment on the incident according to CNN Money.

The applicable audio starts at the 21:25 mark of Le Show.

JOE SCARBOROUGH: What do you have after this?

SCARBOROUGH: I tell you what. The Bloomberg poll—all the polls out today look great in South Carolina.

SCARBOROUGH: All of them.

TRUMP: But I’m being hit. You know, their spending $75 million on negative ads on me over the last two weeks. Are they catching on at all?

SCARBOROUGH: No. Doesn’t look that way.

TRUMP: What do you think? Are they catching on? They’re vicious

TRUMP: They’re spending a tremendous amount on negative ads on me.

BRZEZINSKI: No. You know what I thought was the—kind of WOW moment; was the guy you brought up on stage.

TRUMP: Yeah that was great.

SCARBOROUGH: We played it several times this morning.

BRZEZINSKI: We played it up against Obama.

TRUMP: Both guys. They’re both guys.

SCARBOROUGH: What we did was we played Obama first—

BRZEZINSKI: The young guy was a champ. 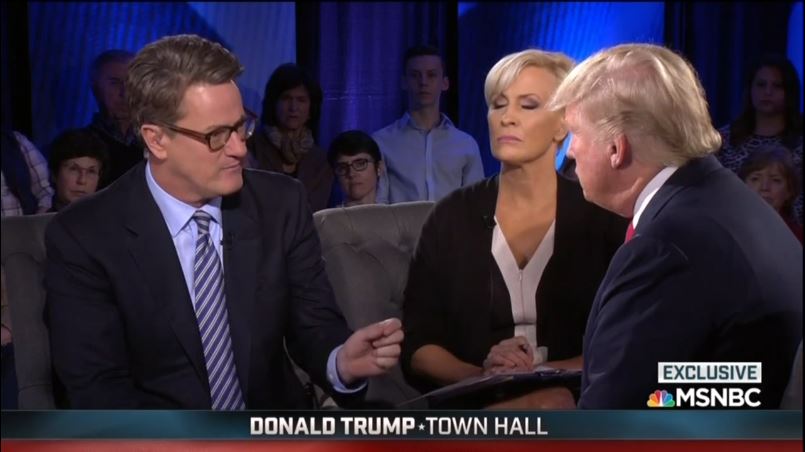 SCARBOROUGH: --Then we played the guys.

TRUMP: I saw it. I watched your show this morning. You have me like almost as a legendary figure. I like it.

SCARBOROUGH: Man I tell you, this morning – we basically said today was “we were completely wrong about the beginning.”

TRUMP: I thought I did really well in the debate Joe. I have to tell you.

TRUMP: You did not right?

BRZEZINSKI: Oh my GOD. I was like “he’s melting down!”

SCARBOROUGH: We were wrong.

TRUMP: You thought what?

BRZEZINSKI: Your head was going to explode.

TRUMP: Oh no. I thought I did good.

BRZEZINSKI: My daughter was screaming at the TV.

SCARBOROUGH: By the way. By the way, he told me, he goes “I was having fun.”

TRUMP: Remind me, one more segment?

BRZEZINSKI: One more segment and then we’re good. Thank you for doing this. 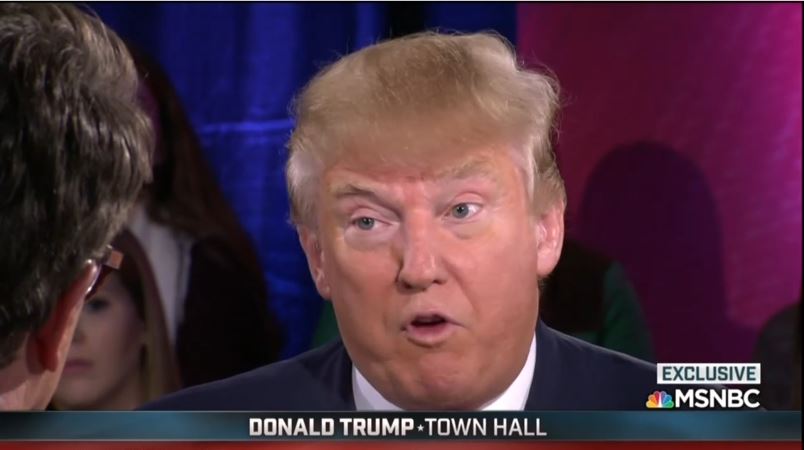 BRZEZINSKI: We’re getting a real window into your—So

TRUMP: Just make us all look good, that’s it.

TRUMP: So how come Drudge and TIME magazine said I won the debate, Joe, and you think [in audible]

SCARBOROUGH: But—but so did the CBS poll. The next morning when I saw the CBS poll I knew—

TRUMP: For them, I was second.

SCARBOROUGH: Yeah but still. I knew that the people that mattered didn’t think you lost it. I mean you came in a strong second. And I tell you what was the most revealing thing is Bush came in last.

SCARBOROUGH: The guy you fought. And at that point I said to Mika “we don’t know what’s going to happen. [Inaudible]

BRZEZINSKI: Oh you don’t want me to do the ones with deportation?

SCARBOROUGH: We really have to go to some questions.

BRZEZINSKI: And pay for the wall?

TRUMP: That’s right. Nothing, nothing too hard Mika.

SCARBOROUGH: [Inaudible] No it—I think that was, for most people in the Republican establishment, sort of the final sign.

SCARBOROUGH: Because after this—

TRUMP: Hey, we’ll see what happens. What are the chances that something bad could happen on Saturday for me? There’s always a chance right?

TRUMP: By the way they always said that about me.

SCARBOROUGH: --but it’s a caucus state. In primary states, look how close New Hampshire was. The polls were almost identical. You can take a mix of these polls and you can overlay it. 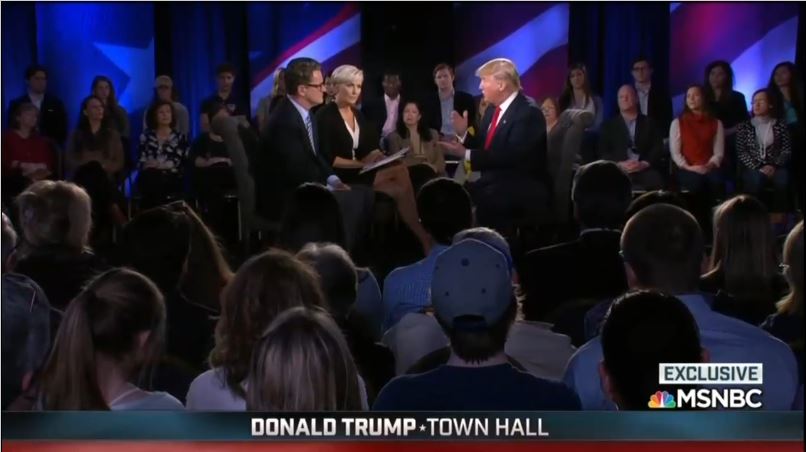 TRUMP: The polls are great. Except for caucus because they change their mind.

SCARBOROUGH: Except for caucus. Caucuses, they should get rid of them.

SCARBOROUGH: But you’re so far up in Nevada according to this latest poll.

TRUMP: I have a great building there.

TRUMP: I played four days ago.

SCARBOROUGH: No. There’s no way.

TRUMP: First of all I played—You know what I played with Lexi Thompson who’s the great young player.

TRUMP: I played nine holes. I didn’t even want to play no more. Cause you know, I’ve been think about this. I don’t even care.

SCARBOROUGH: No no, yeah you-- there’s no way.

TRUMP: Oh, oh you leave him out of it.

BRZEZINSKI: Keep it tight. Alright, alright I got it. I got it. 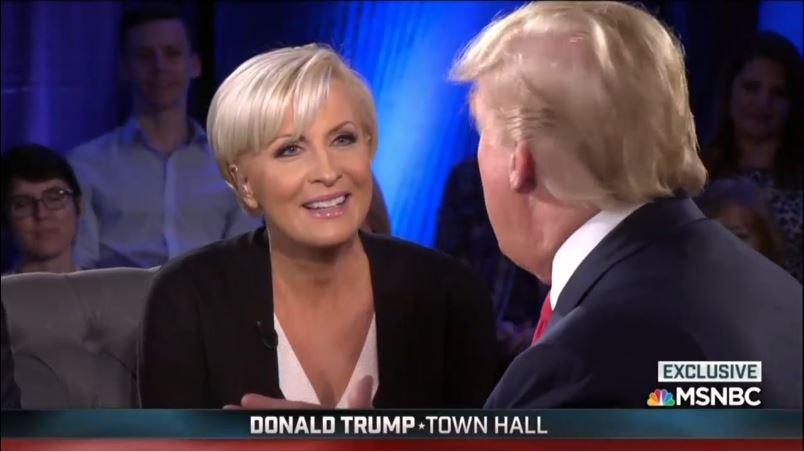 TRUMP: I mean, he’s been—He’s been brutal to me.

BRZEZINSKI: There must be a delay.

TRUMP: That guy has been brutal.

TRUMP: I don’t know about now, but I mean I could tell you.

SCARBOROUGH: Oh absolutely, he was he was.

TRUMP: Some people have come over.

SCARBOROUGH: So Liz has completely changed.

TRUMP: So Liz has been changed.

SCARBOROUGH: We made—we made news when Mika did—when you did word association in New Hampshire.

BRZEZINSKI: I almost hade a cow.

SCARBOROUGH: That made news.

TRUMP: You know what made news? The Hillary thing.

TRUMP: It was a strong statement.

SCARBOROUGH: You sat there and you waited so you thought about it. It’s funny. And everyone’s talking about it.