MRC POLL: Most Say CNN’s Left-Wing Bias Has Driven Them Away 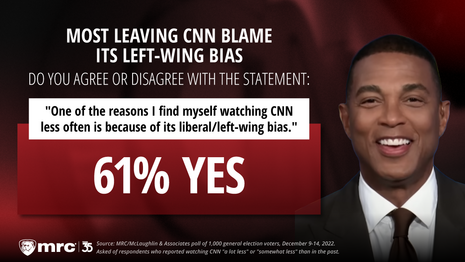 A new poll from the Media Research Center, conducted by McLaughlin & Associates, finds a majority (54%) of CNN viewers say they are now watching the network less than they used to, and most of those people (61%) agree that “one of the reasons I find myself watching CNN less often is because of its liberal/left-wing bias.”

CNN’s ratings collapse is well known; this summer, for example, its audience slipped to levels not seen in 22 years. “CNN is in a bad place,” one media executive told The New York Post in September. “The ratings are down really dramatically year over year.”

The Media Research Center poll demonstrates that CNN’s biased political coverage is a likely reason many of these viewers have been driven away.

People who reported watching less were then asked to react to the following statement: “One of the reasons I find myself watching CNN less often is because of its liberal/left-wing bias.” A majority (61%) said they agreed, including a majority of self-identified moderates and liberals (52% for each group), and a whopping 80 percent of conservatives.

The new chairman and CEO of CNN Chris Licht recently denied he wanted to position his network as more centrist, calling it “bullsh*t.” Licht may want to re-think his strategy, given how our poll shows CNN’s left-wing bias is a key reason viewers are abandoning the network.

For this report, McLaughlin & Associates conducted a national survey of 1,000 voters. The survey was conducted online between December 9-14, 2022.