On Friday's Fox News at Night, NewsBusters Executive Editor Tim Graham discussed his picks for Media Highlight and Lowlight of the Week. CNN analyst Scott Jennings upsetting his colleagues on CNN Tonight Thursday by explaining how the so-called "Inflation Reduction Act" offered no immediate benefits was the highlight, courtesy of Kevin Tober.

GRAHAM: All he's doing is telling you the fine print. Here is what is actually in this bill and what we've seen too much in the media is them just saying oh, they passed an Inflation Reduction Act and he's basically saying some of these provisions are going to take about four to kick in, and the official estimates say it's not going to do much to reduce inflation. All they want to be able to do is say Biden passed a bill, and it almost doesn't matter what's in it.

The lowlight was Whoopi Goldberg's cockeyed theology lecture on The View, as captured by Nick Fondacaro, that God was smart enough to know women needed abortion and gave humans free will so that they could choose it when they needed it. Bream mentioned Georgia Democrat Stacey Abrams also explained her Methodist minister parents taught her that view. 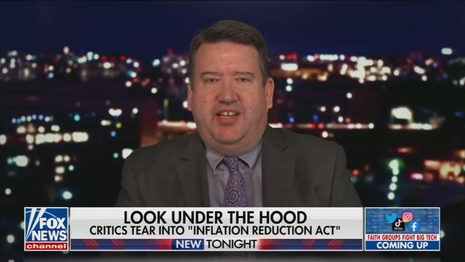 SHANNON BREAM: Elisabeth Hasselbeck was not buying it and Tim, you're not either. Why?

GRAHAM: No, and maybe she started mentioning God because she was sitting near Elisabeth. It was nice to see her on the set of The View, a little bit of sanity.

You know, the problem here obviously is if you just merely say with this 9th grade moral reasoning that God gave us free will so we can do whatever we want with it. I mean, you want to say to Whoopi: God gave us commandments to follow. Now you can choose not to follow them, but that's not why God gave them to you. He didn't give you free will to choose the wrong thing, but you have the freedom to do that.

I just find it weird that they're going to try to say that God is pro-abortion. It makes no sense whatsoever.

Townhall's Managing Editor Spencer Brown was the other guest, and his highlight was a Stars and Stripes story on a veteran donating part of his liver to another veteran. His lowlight was The New York Times complaining about the "havoc" caused by Texas Gov. Greg Abbott busing illegal aliens to New York City and Washington, DC.

Our spot on Fox News at Night was brought to you in part by Sleep Number.