Bozell to Journalists: If You Hammer Trump for Market Fall, Praise Him for Gains

Media Research Center President Brent Bozell on Tuesday instructed journalists that if they are really going to hammer Donald Trump for Monday’s stock market fall, then these reporters need to credit the President for the economy’s roaring successes as well.

Talking to Stuart Varney on Fox Business, Bozell explained, “I'm willing to say, ‘Go ahead pin this on Donald Trump,’ but you've got to pin everything else on him, which is a mammoth success. And they won't.”

He concluded, “This is such dishonesty. There's just nothing this man can do that he gets credit for, nothing.”

On Monday, NBC lectured that the “president is possibly learning” to stop taking credit for the stock market.” CBS criticized Trump for touting tax cuts.

A partial transcript can be found by clicking on “expand.”

[Technical difficulty: Show cuts back from commercial and segment has already started.]

STUART VARNEY: I'm look at a headline in The Washington Post today, it's an article, an op-ed written by Catherine Rampell. The headline is this, “Is Trump to blame for the market dive?” She actually writes —  She doesn't make him out that he's to blame. She has lots of other reasons. But the headline says it all, they've linked the President with the stock market dive as if it's his fault. Just the headline alone does it. Look, I'm sorry, Brent, but I find that kind of typical. 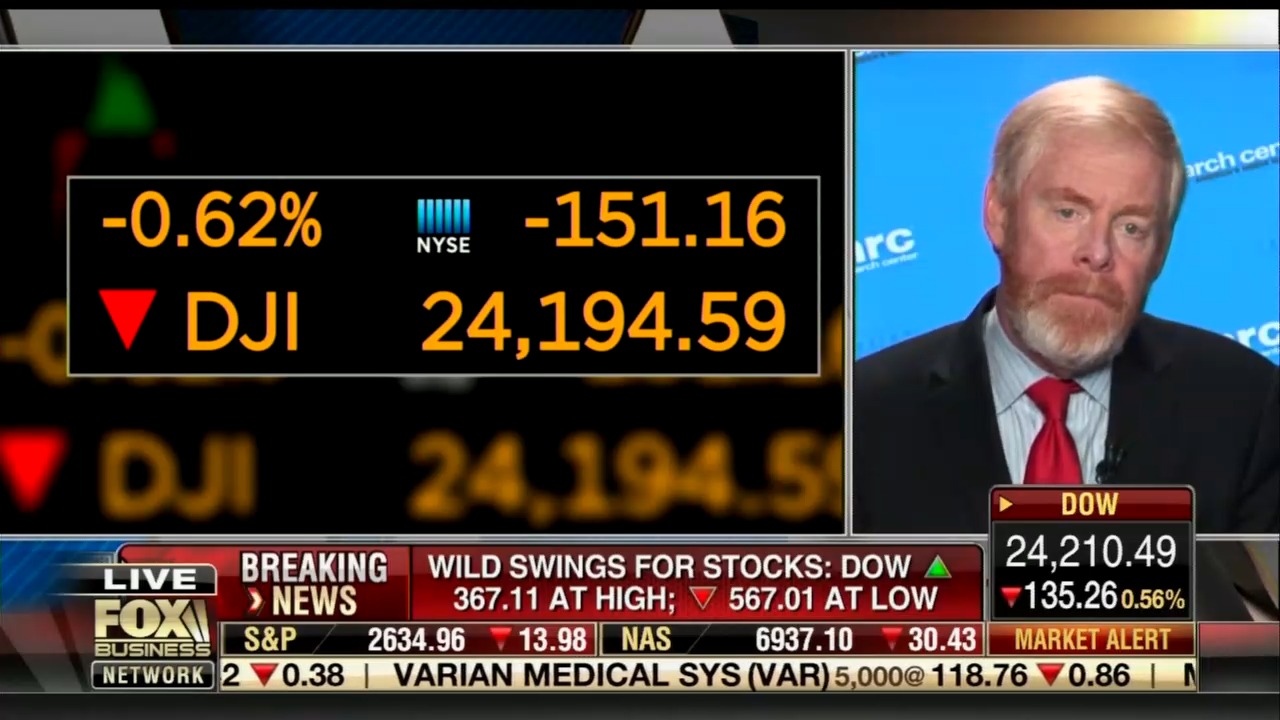 BRENT BOZELL: It is. You can name— can you name me anybody who's an economist who said the market isn't going to correct itself? You name anybody? Everybody has been saying that because the market always does. When it goes to this kind a high, it always corrects. Everybody's been waiting. Now, I'm not trying to say this is just all rosy and wonderful it is we've lost, what, $4 trillion on the market. No. But everybody was expecting this to happen, and I think it will go right back. But the bottom line, again, if you look at the start of his presidency to now, it's been a meteoric rise, and it's just slightly less than meteoric at this point.

VARNEY: Is it legit for President Trump to own the run-up and yet not own the rundown?

BOZELL: Well, if you look at what economists are going to argue, which is to say that the Fed has very, very capriciously kept interest rates low and they had to go up and this is the anticipation, yes, yes, yes, I'm willing to say, I'm willing to say, “Go ahead pin this on Donald Trump,” but you've got to pin everything else on him, which is a mammoth success. And they won't do this. This is such dishonesty. There's just nothing this man can do that he gets credit for, nothing.

VARNEY: You are right about that. Brent Bozell, thank you for joining us on a very important day. We are obliged to you. Thanks very much.